The Playboy Club and Pan Am are period dramas at their worst. 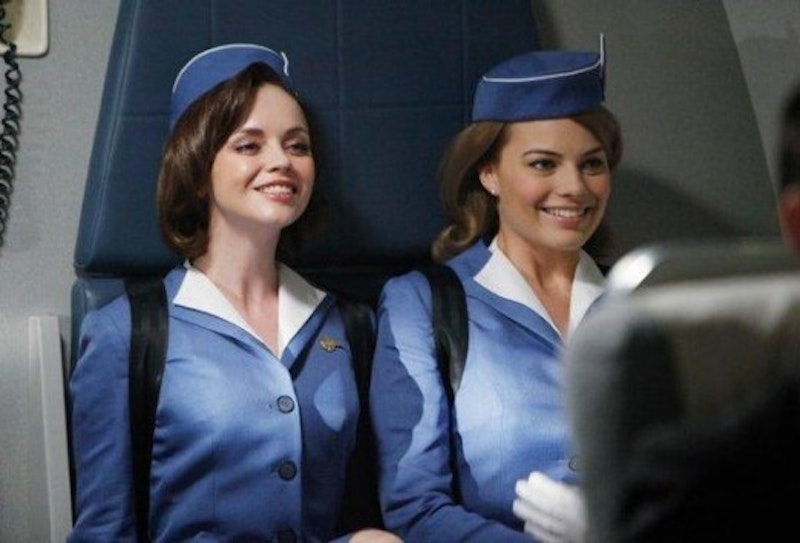 My double review of Pan Am and The Playboy Club, intended as some sort of “What will fill the Mad Man void” rumination, has failed. The first half appeared two weeks ago with the premier of Pan Am. The Playboy Club was up next. And yet: Three episodes in, The Playboy Club is done, and no wonder. From scene one it was more Maxim than Playboy. It tried to be sexy; it tried to be Boardwalk Empire tough; it tried to be something, and it failed—colossally so. The gloss was suffocating; it didn’t even attempt to be anything other than eye candy—the very stereotype the show’s characters tried so damn hard to transcend. It’s not even worth recounting the truncated plots and subtexts. The show was terrible.

The Playboy Club accounts for half of this double review’s failure. The other half belongs, of course, to Pan Am. If this show makes it through a full season, I’ll give $20 to every single person that comments on this article. For God’s sake, the second episode is titled “We’ll Always Have Paris.” Where were we? Right, one of our characters ran out on her wedding to be a stewardess, like her sister. Another is actually—holy shit—a spy. The whole spy thing is, to be back-handedly charitable, reminiscent of, er, Chuck.

Nearly every line delivered by a female character is breathless. Beauty is taken for granted, and not just when a dick of a male passenger corners one of the stewardesses (“I am not included in your ticket,” she says, before stabbing him with a fork), but throughout the show as a whole. Dialogue, character development—anything of potential substance is subservient to beautiful Parisian apartments, tailored uniforms, and beautiful men. Three episodes into Pan Am, nothing is convincing. The danger of being a spy in the middle of the Cold War is laughable; JFK is a jelly donut and there are certain facts about him that are not available to the general public (but amply available to Pan Am stewardesses); a reference to the Nazi occupation of France is worth a few violin swells and a wall-eyed flashback sequence.

It’s at this point in the third episode, “Ich Bein Ein Berliner” (there isn’t a cliché this show doesn’t love), that I realize it was stupid to shoehorn a “Where is the Mad Men” theme onto Pan Am and The Playboy Club. This might be a grudging admittance that I actually thought period dramas would prove to be a successful dramatic counterpoint to all the nihilist and silly and awesome comedies out there. No. It’s not as if Mad Men is a transcendent show (try the newest iteration of Downton Abbey if you want an actual, dyed-in-the-wool period drama; the British are masters of period dramas and scoring nature documentaries), but it made waves because it created complex characters while unabashedly cashing in on glamorized alcoholism, sexism, and tie clips.

In its wake we have Pan Am and The Playboy Club. The latter is dead—mercifully dead. The former is holding on because, well, who knows why? There aren’t more words left to spend on Pan Am. It’s naïve to the point of unbearable. It’s almost as shallow as The Playboy Club. It simply cherry picks the more sensual tropes of the 60s without attempting to delve beneath the surface. Remember to smile—we need to keep the Cold War cold, and there are months between now and the next Mad Men episode.