Elvis Gets in its Own Way

Austin Butler is a great Elvis, but Tom Hanks is a disaster as Colonel Tom Parker. 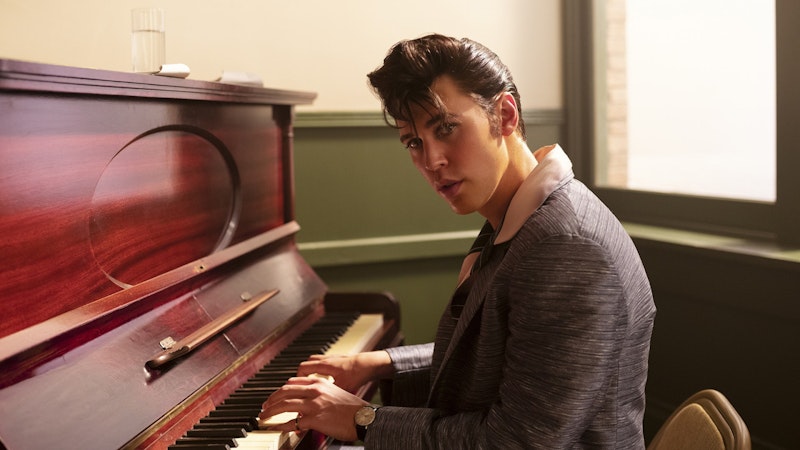 Say this about Elvis, the new biopic of Elvis Presley directed by Baz Luhrmann: It’s not one of those music biopics that cribs just about every beat from the parody Walk Hard: The Dewey Cox Story. It's not Bohemian Rhapsody. The film is flawed, makes some baffling choices, and takes every one of Luhrmann's directorial tics and turns them up to full volume. And it features one of the worst performances in the career of a great actor. That said, Austin Butler is a revelation in the title role, and as long as Elvis is on stage, the movie is massively entertaining. Luhrmann's film does the most important thing an Elvis movie can, in conveying just how enrapturing he was as a performer, and how crowds reacted to him. Butler, who did all of his own singing and dancing, was more than up to the challenge.

Luhrmann make movies slowly; Elvis is only his sixth film in his 30-year directing career, and it's his first since his Great Gatsby adaptation in 2013. But the movies themselves? They move very, very fast. Elvis has a running time of two hours and 40 minutes, but it moves at a ridiculous speed, deploying about a half-dozen montage sequences. We first meet Elvis as a kid in Mississippi, but the film quickly segues into his musical career, as he meets his longtime manager, Col. Tom Parker (Tom Hanks).

Shot mostly in the director's homeland of Australia, the film rushes through Elvis' story: His initial burst on the scene, the hip-swirling dance moves that scandalized the nation, his service in the Army, and his run as a movie star. Most of the film's second half has Elvis in Vegas, in a proto-residency, while in conflict with Parker. The manager was seeking to exploit Elvis while putting off a lucrative foreign tour, which would’ve exposed Parker's immigration status.

Hanks as Col. Tom Parker is probably the worst work of his career. It's a ludicrous, over-the-top performance, especially since Parker was supposed to be hiding that he wasn't really from America and was Dutch. But Hanks does a heavy accent, which sounds more German than anything else. Also ridiculous is a framing device, which has a dying Parker narrating the story while wandering around Vegas casinos.

This doesn't leave much oxygen for any other characters. Elvis' wife Priscilla (Olivia DeJonge) is almost a complete nonentity, while the film leaves out that Priscilla was 14 when she and Elvis began dating. Elvis is an above-average movie when it's about Elvis, but a terrible one when it focuses on Parker. On the positive side, the musical numbers are riveting, and the film has some very strong stretches, especially involving the filming of the '68 comeback special.

The story cuts off a few years before the singer's death, so we don't get much of the Fat Elvis era (a character mentions that Elvis has gained weight, but he looks about as thin as he did for the rest of the movie; only his sideburns have changed). Also omitted is Elvis' 1970 White House meeting with Richard Nixon, which was itself the subject of a movie, Elvis & Nixon, a few years ago, one that depicted Presley as a cranky reactionary who hated the counterculture.

In the Luhrmann film, contra that famous Public Enemy lyric, we get no indication that Presley was racist or possessed anything other than down-the-line, liberal, pro-civil rights political views. Elvis makes clear that The King borrowed/stole both musical stylings and dance moves from Black entertainers in his hometown of Memphis and elsewhere, but we're meant to think he did so out of love and admiration. Elvis Presley has been dead since 1977, almost 45 years ago, and hasn't had much time in the pop cultural sun in the last 10 or 15 years. When I was growing up in the 1980s, Elvis was mentioned most frequently in connection with that ubiquitous urban legend, now almost completely forgotten, that the singer was secretly still alive.

That led to the fantastic 2002 movie Bubba Ho-Tep, starring Bruce Campbell as a still-alive Elvis who fought a mummy in a nursing home. It's the best Elvis movie other than the ones Presley himself starred in, and it came out almost exactly 20 years before the new Elvis film. As did Lilo & Stitch, the Disney cartoon that was scored entirely with Presley tunes.

If the idea of Elvis was to introduce The King to a new generation, the new movie is a success, as far as Austin Butler's performance of Presley's songs and stage presence is concerned. But too often, especially when Parker is on screen, the movie can't get out of its own way.