The Writer Who Fought With Star Trek 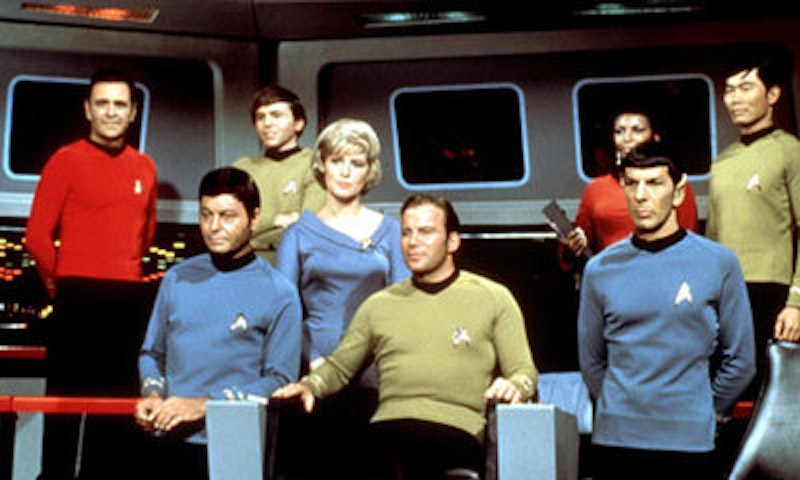 “This oblivion idea is Roddenberry's philosophy, not mine,” said John T. Dugan. “My philosophy was that these entities would exist as spirits for eternity, but they wouldn't have their bodies. That might be a small thing, but I have a reputation and a philosophy, and everybody who knows me knows what I stand for.” I think that's brave; he acts like he matters.

Dugan wrote a lot of TV in the 1960s, including once for Star Trek. He had met the two Genes—Gene Roddenberry and his number two, Gene Coon—at meetings of the Writers Guild, and they asked him to pitch for their show. One of his ideas sold, but everything turned out badly. The writer missed a deadline and was cute about it, and a memo thrown at his head delivered some hideous insults regarding his dialogue. The writer replied with a directive as to how he and his client were to proceed: “I will, accordingly, await your phone call. NOT your memo.”

In the end, Dugan took the show to arbitration. Roddenberry had done a big last-minute rewrite and said it was now his script and should have his name on it. The guild ruled for Dugan, at which point Dugan took his name off the episode and put on a pseudonym. His reason for doing so was the afterlife. Of the great many lines that Roddenberry had dropped into the script, one dealt with oblivion. A pair of superhuman beings was discussing their future, and one said that maybe they would die and there would be nothing. That mention was Dugan's sticking point. “I certainly don't stand for oblivion in the afterlife,” he said.

All this comes from These Are the Voyages by Marc Cushman with Susan Osborn. The book notes that Dugan's script, un-rewritten, did an “exceptionally good job capturing the voices and attitudes of the series' regular characters,” but says that the plot was top-heavy and the guests' behavior “not believable.” The part given to Leonard Nimoy, as a voracious alien spirit inhabiting Spock, is “cartoonishly hedonistic, shoveling plateful after plateful of food into Spock's body, even when Spock's consciousness attempts to be heard, groaning about all the gluttony, begging that no more food be consumed.” The Nimoy part is also “remarkably flirtatious with Thalassa, arrogantly suggesting she would have a better time with him than Sargon.” The memo thrown at the writer's head says the Nimoy character talks “like an adolescent Joe Penner,” identified by the book as a “1930s-era vaudeville, radio and film comedian.” That doesn't sound so bad. It's one step from Spock as Groucho, which would be overkill. But Spock as generic 1930s drugstore gigolo—“All right, girlie, lead the way.” (To use a line cited by the memo.)

The episode is “Return to Tomorrow,” a title so featureless it could be part of a witness protection program for TV episodes. The show comes from a stinking period of the program's history, when the second season looked like it was about to end early, but didn't, and then the show had to rush out a jumble of bad scripts. By this point a frayed and bitter Gene Coon had jumped ship. He was the author of the stink memo, and at the bottom of Roddenberry's copy he wrote, “Dear Gene, I quit.” A joke, but only kind of, because two months later he was gone. First he had to give Dugan the phone call—not memo—that the writer demanded.  And then he left. The reasons were bigger, but Dugan sounds like the last straw.

And yet Dugan did a good job on the regulars. He got their behavior and he got their voices. Try finding a TV writer who can do character—that person is an artist. Try finding somebody who writes to your format—that person is nonexistent. (Or so the going was for Star Trek, if you judge by their production memos.) John T. Dugan wrote character and he wrote it to format. But nothing came to any good. He received the stinking memo about his dialogue, waited a month in silence, and then fired back: “My script was read with half an eye—written with a lot more attention & devotion to detail than was granted in the reading,” etc. After which Roddenberry did his rewrite and the Writers Guild was called in.

Dugan had always approached the two Genes writer-to-writer, man-to-man. “Finally: Please like it,” he'd written on the cover letter for his script. “You know how $#%*! sensitive I am.... Writer & Fan, John.” No good. The script was what triggered the stink memo from Gene Coon, and Coon's sign-off was this: “See what happens when a sensitive writer submits a sensitive script to a sensitive producer. Yours sensitively, Gene L. Coon.” Coon was normally a nice guy, but he'd stripped his gears from overwork and Roddenberry was giving him flack.

Dugan's script did say the aliens were from Arret, which is Terra spelled backwards. Many outlines and scripts sent to Trek contained ideas like that. One fellow had Kirk and a lady science officer discussing the universe and how it was a giant organism with humanity as an antibody, and how the two of them felt about this. Reading a lot of that material could get on a person's nerves. And then there was Roddenberry complaining about “The Trouble with Tribbles” and how the episodes were getting too funny.

I don't know if John Dugan wrote another word that anybody remembers. I'm pretty sure Roddenberry didn't, and Coon died after a couple of years running The Name of the Game, which was a pretty good caper show with smartass dialogue. Everybody remembers Star Trek, of course. But the people who made the show turned out so many words that they were proud of, and so many of the words have vanished. Even the writing that has stuck around has done so as an accessory to the program, an add-on to the experience of watching Kirk and Spock do the usual. “Return to Tomorrow” has played a few million times on TV and computer screens, and I guess there's somebody who enjoys it. But God, is it a snooze. More Joe Penner might have helped.