Clementine, which has a lot in common with Portrait of a Lady on Fire, isn't as well executed. B- 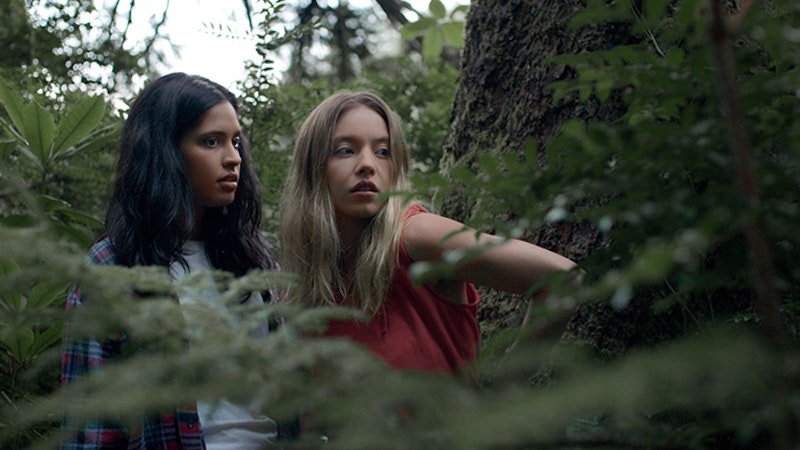 If you enjoyed Portrait of a Lady on Fire but wish it had been set in the present day and tacked on half-hearted mystery and thriller subplots, you might like Clementine, a new film that arrives on VOD this week.

Directed by Lara Gallagher, Clementine, like Portrait, is a drama about two women discovering their relationship, while they're alone together in a large house that's adjacent to a body of water.

Karen (Otmara Marrero), a woman in her late-20s, is reeling from a recent breakup and decides to squat in a scenic lake house, somewhere in the Pacific Northwest, that belongs to her ex. That the locks have been changed, and she has to break a window to get in, is an indication of about how well that relationship ended. Soon, Karen stumbles into Lana (Sydney Sweeney), a young woman with a mysterious past who seeks her help and then befriends her.

The film has some of the same positive aspects as Portrait—fine performances by both lead actresses, beautiful cinematography (from Andres Karu), a fine choice of the house that serves as the main location, and love scenes that don't look as if they were produced for Brazzers.com. At times, the film also brings to mind François Ozon's 2003 Swimming Pool, with Ludivine Sagnier and Charlotte Rampling, another film about a mysterious young female visitor to a country house.

On the minus side, Clementine tacks on numerous silly plot contrivances, and a ludicrous late twist involving guns and a break-in at the residence of a duo of amateur pornographers. The film, at times, feels like it's about to veer off into the horror or crime genres, and in doing so it gets away from the actual interesting things that were happening in the first half hour.

The lead actress, Otmara Marrero, is a newcomer, having only appeared in a handful of other indie films. But she's very good here, in a role that's quiet but expressive. Sweeney has more of a track record, with the HBO shows Euphoria and Sharp Objects and the recent Hulu movie Big Time Adolescence. She also played one of the Manson girls last year in Quentin Tarantino's Once Upon a Time in Hollywood.

Something of note in this movie is that it’s a mystery exactly how old Sweeney's character is. The actress is now 22, 20 when the movie was shot two years ago, although she looks young here. The actress looked significantly older in the first season of Euphoria, which aired last summer, even though she was supposed to be playing a high school student.

Clementine has taken a route that I sense is going to be familiar with this year's movies. It debuted at Tribeca a year ago, played other festivals throughout 2019, was acquired by Oscilloscope with an eye towards a 2020 theatrical release, until coronavirus made it a VOD-only release instead. The film has some virtues, but it's hard to justify the rental fee when Portrait of a Lady on Fire is sitting right there on Hulu.