Free Guy, based on a video game, is a pleasant surprise considering the source material. B+ 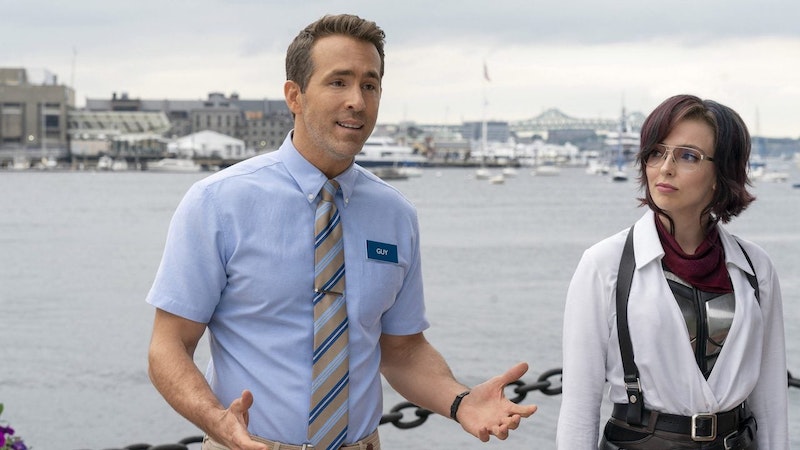 Free Guy doesn't arrive with a promising pedigree. Movies based on, or set in, video games are rarely good. The movie comes from director Shawn Levy, who’s nobody's favorite filmmaker. And the film was delayed repeatedly throughout the pandemic, yet always seemed like an afterthought amidst the delays of the James Bonds, Black Widows, and Top Guns.

But Free Guy turns out to be a pleasant surprise. It's a lot of fun, and builds a compelling, beautifully rendered world. And it has some interesting things to say about artificial intelligence and gaming culture.

The plot of Free Guy takes place on two different planes of reality, one inside a video game and the other in the "real world." Ryan Reynolds plays Guy, an NPC (non-playable character) in a Grand Theft Auto-like violent video game. A smiling bank teller, always wearing the same blue shirt, Guy lives the same day over and over, never finding it the slightest bit odd that his bank gets robbed by the same guy every single day. Guy pines for Molotov Girl (Killing Eve's Jodie Comer), an adventurer within the game, and as the movie goes on Guy appears to somehow gain sentience.

The film, written by Matt Lieberman and Zak Penn from a story by Lieberman, hashes together different ideas. It's like an R-rated, live-action Wreck-It Ralph, only about a Grand Theft Auto-like game, or alternatively a video game-based version of The LEGO Movie. There are also elements of The Truman Show, as well as the underrated Will Ferrell film Stranger Than Fiction.

Reynolds, in a career rut, has fun in the role, while Comer shows serious movie star potential. She's best known as the psychopathic assassin Villanelle on Killing Eve, although it's good to see her liberated from the lackluster writer that's plagued that show. Utkarsh Ambudkar, a standout in everything from Blindspotting to Never Have I Ever, makes the most of a small role. Waititi, meanwhile, is delightfully oily in what probably is his most loathsome acting role to date, and he once played Hitler.

Levy, the director, is associated with such dreck as the Night at the Museum series, The Internship, and the Steve Martin Pink Panther remake, although occasionally he'll make something decent like 2014's standout literary adaptation This Is Where I Leave You. Levy’s work has never been associated with visual beauty, but Free Guy is an exception, rendering some gorgeous “levels” in the game, and also getting creative with the type of storytelling a game-based movie allows. And while the film doesn't follow the Space Jam: Legacy riff where the characters keep running into familiar characters, there’s one scene near the end that gets a little too cute with some Disney intellectual property. Free Guy was developed at Fox, prior to its purchase by Disney, and was one of the few projects that survived the merger. It clearly deserved to—and I wouldn’t be shocked if it leads to a sequel.