Bruce Willis is Smoking Hot in The Fifth Element 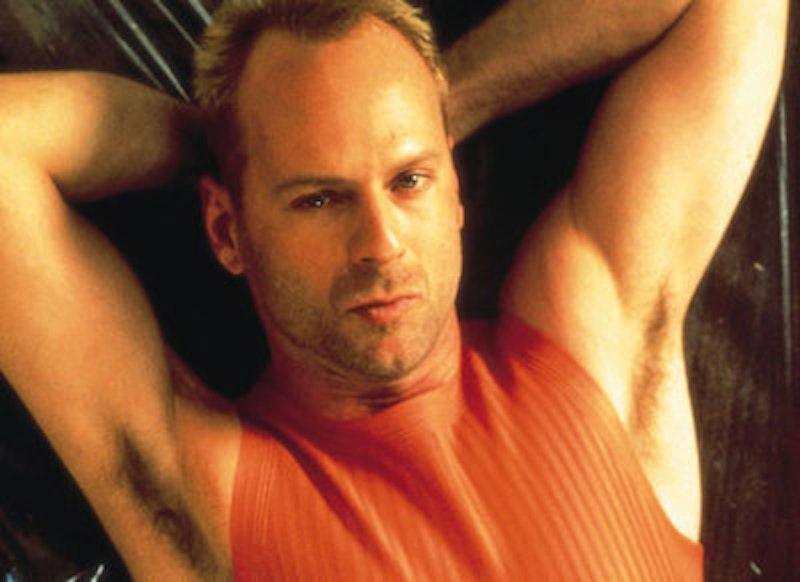 There are awesome weekly free film specials at a movie theater in Easton over here on Maryland’s Eastern Shore. They show a free kid’s movie every Thursday morning at 10 a.m., a free classic movie every Monday morning at 10 a.m., and a free “cult classic” movie every Sunday night at 10 p.m. What a fantastic deal, any excuse for popcorn, candy and a kid-free night, so a few friends and I went down on Sunday to see a movie called The Fifth Element.

All I knew about the movie was that it came out in 1997 and starred Bruce Willis. (In 1997, I had one kid and was pregnant with the second, so if I was seeing any films they were likely to be Disney in nature.) Everyone I went with had seen the movie and couldn’t believe I hadn’t. It was very strange to experience a 1997 movie in a modern movie theater because in your mind you’re watching a new movie, only for some reason all the costumes and hairdos and especially Bruce Willis’ hairline are from the 90s.

Let me summarize the plot:

So it’s the long-ago past and Luke Perry from Beverly Hills 90210 who has a really small part is in Egypt and aliens come and take mythical stones containing international symbols representing the four elements: fire, earth, air, and bacon and the fifth element, a statue. Then it’s 300 years later, in what 1997 thought the 23rd century was going to look like, and Bruce Willis drives a cab, and…

Time freeze. When Bruce Willis appeared on screen, my nipples hardened a tiny bit, and, given that the movie theater was a bit cold, I don’t mean to say this to give you too much information, but merely so you can understand that I was shocked to discover I still have a physical reaction to how sexy Bruce Willis is (and, mainly, was).

Hi, Bruce Willis. How are you in your time-warp state? You, with your green, expressive eyes and your cocky half-grin and your pecs and biceps and New Yorky funny, charming, slightly bad-boy and able-to-escape-bombs-blowing-up-shit-behind-you superpower? Listen, my fellow New Jersey friend. I wasn’t just some groupie 1988 Die Hard fan, either. My massive crush on you goes back to your entertainment roots: Moonlighting. From 1985-1989 during my formative high school and college years, I didn’t have a vibrator, but I didn’t need one during the 66 sweet tv episodes when you were throwing smoldering glances at Cybill Shepherd and breaking the fourth wall to address the audience. My early masturbation fantasy life included pretty much you, William Shatner from Star Trek, Christopher Reeve from Superman, and (okay, this one’s a little embarrassing), John Travolta from Grease. I was so jealous of Cybill Shepherd in Moonlighting and every week I completely mocked the stupid filter they used in every shot to make her look young and hot enough for your smoking self. She wasn’t good enough for you. The bottom line, Bruce, is that when I see you on the big screen even in a 1997 movie and even now, more than a quarter of a century later, I can feel it all the way to my one remaining and non-functioning-but-still-apparently-connected-to-my-brain ovary.

Now back to my regularly scheduled film plot summary:

… and the cab of Bruce Willis can fly, because everything flies in the future. Suddenly a kind of pop sci-fi alien stripper with fake red hair named Lee-loo falls from the sky into his cab. There is an Evil Emperor Zorg, like in Toy Story, and he has bad hair and a muppet penis pet. In fact, throughout the film there are many leftover muppets and costumes they apparently didn’t use in the Star Wars Cantina scene, including a huge blue octopus opera singer. There is a fabulous black gay (okay, bi?) DJ who along with all the other characters, wears the hell out of the fucking fantastic, amazing Jean Paul-Gaultier costumes and then Bruce has sex with Lee-loo to save humanity because in addition to bacon, love is the most important element in life.

I don’t think I spoiled any elements of the plot for you, so if The Fifth Element comes on the SyFy channel because someone complained that they don’t want to see any more Sharknado 24-hour marathons, you should watch it. It’s a wild ride, a nutty pseudo sci-fi hot mess, but it’s not really a bad movie if you like camp. Also, it’s probably a movie that is appreciated through multiple viewings and across time, so I’ll probably like it even more sometime when I see it on cable.

The movie wasn’t over until like midnight, which is way past my bedtime, but I still had to go home and wake my husband up to have pretend Bruce Willis sex with me because after all these years, my then-tv actor crush is totally still happening.