Benjamin Bratt Is So Fucked 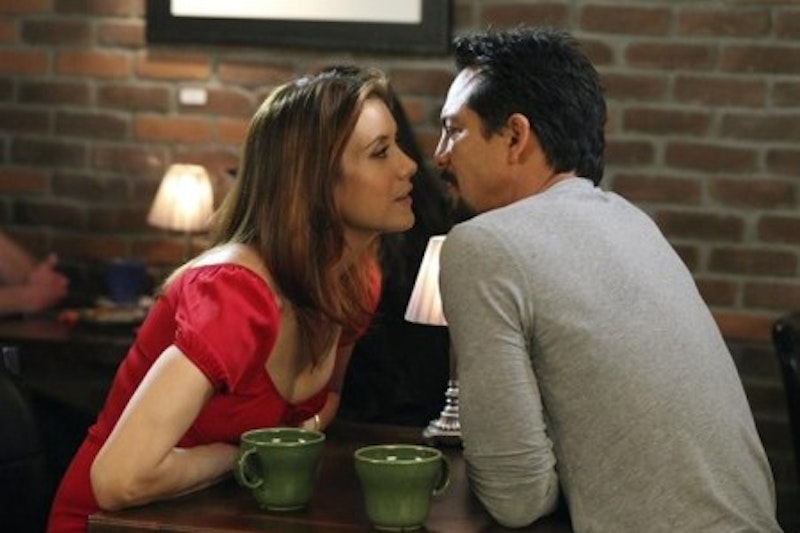 While Dr. Jake Riley (Benjamin Bratt) now is the latest addition to the Oceanside Wellness Group, his arrival on Private Practice was almost laughably inauspicious—as a no-name, no-background vacay hook-up for Addison Montgomery (Kate Walsh) who Ade ultimately blew off in last season’s finale. In one of those moments of schadenfreude endemic to soap operas, Ade—whose biological clock is ticking so hard viewers need to don a flack jacket just to get through an episode of this show—consults a fertility specialist whose warm, sensuous eyes turn out to be the same ones she’d been gazing into just months earlier. Then just like that, dude’s all up in the practice, projecting goatee’d hetero sensitivity and wizened grown-ass man charm (something Practice is usually short on), pumping Ade full of hormones on the regular, and just generally easing into the vacant role of clinic diplomat/voice of reason—a position held and abdicated by Naomi Bennett (the AWOL Audra McDonald) and Sheldon Wallace (Brian Benben).

We don’t know a lot about Riley at this point. So far, we’ve watched him interact earnestly with patients, confide in a gravestone, and inadvertently audition for the “aged Chris Cornell” role in a Soundgarden biopic. In essence, he’s Doug Savant in the first couple seasons of Melrose Place: a nurturing blank-slate who seems blissfully unaware that he’s stumbled into a den of neurotics, narcissists, and high-functioning sociopaths and in so doing risks becoming entangled in a viciously tangled web of secret liaisons, rapes, drug spirals, office love triangles, interventions, Hippocratic Oath gray area wanderings, legal challenges, deaths, unconventionally lunatic childbirths, and Alex Kingston.

Creator Shonda Rhimes keeps the tone of Practice so merry and light that the various darknesses, psychoses, and turmoils-of-the-soul endemic to her characters register as whimsical quirks, but to meditate too long on Practice is to realized how fucked a workplace Oceanside is, and how fucked Riley is as part of it. If the fabled, tumultuous Mer/Der congress and thirtysomething naked careerist med-resident ambition lie at the heart of Grey’s Anatomy, Practice is a playpen of over-compensated pro fortysomethings behaving badly who refuse to know better, to grow up, to sidestep the kinds of crutches and hang-ups parenthood and responsibility should prepare you to sidestep automatically. I mean, these people went to medical; they fucking know they shouldn’t share information about their patients with one another, or publish it in a book, or write themselves prescriptions for oxycodone, or any number of soap-opera boilerplate actions that are in and of themselves less inherently soap-opera than some of the foul, cracked-out shit that’s gone down on Melrose, Dallas, or Days of Our Lives. Maybe once Riley’s got Ade knocked up good and proper and we discover that he’s got a taste for non-bloodletting bondage play in public playgrounds, his presence here won’t seem quite so incongruous, and we can return to the business of trying to figure out why we’re even tuning in every week.