When Game of Thrones begins to blur. 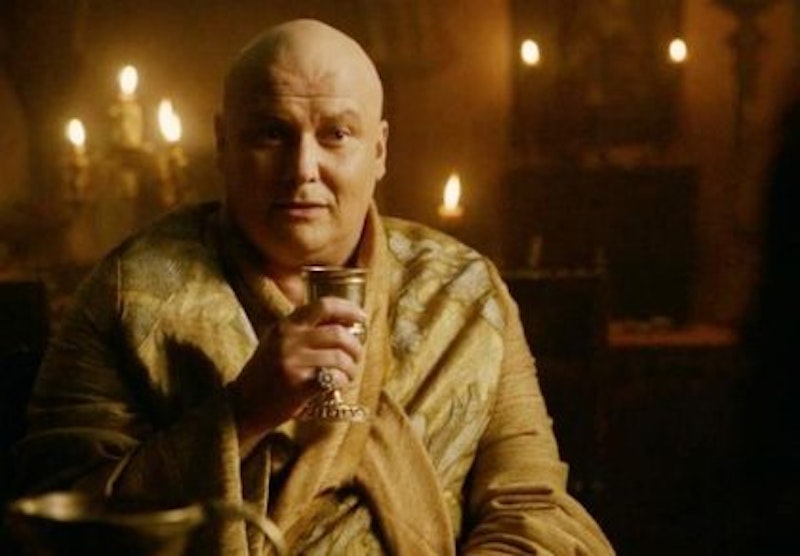 Watching Game of Thrones, I realized the one thing America really wants are bald men sitting next to candles. Bald men with trim beards, candles with a little shimmer around their flame. Drapes are in view. “Bentnor would never dare,” says one bald man. “He dances attendance on that one-legged little whore of his.” “He holds the Quails,” says the other. “Hold the Quails and the Ironfang Reach belongs to whosoever may take it.” “You think the Hothgoons will suffer a horde of outlanders on their precious Quails?” sneers a pretty lady leaning into the candlelight; she has three necklaces and a lot of décolletage. “Ser Marthmott's beard would curl to his nose,” she says. “What's left of either.” The table erupts with mean laughter.

A servant girl shuffles about in the background, eyes ducked toward her rose and cream breasts, which hang in full view. She inhabits a CGI zone that belongs to her alone, and back there prolonged nakedness doesn't matter. Eventually the mean lady will make her way to that CGI zone and share it long enough to inquire if the servant girl has had her blood recently, and then to reach out and give the girl's buttock a twist. The buttocks are on view too, shaded by the lightning but not hidden, and they look like the proud muscled morning sun rising in the wrong direction. However, by this point the buttocks and the lady's gesture won't be as much of a thrill for me as I might have thought.

A young man who looks like a magnet for clumps of fur—separate masses of them are about his throat, his shoulders and also his face, where they take the form of fluffy hair—trudges in the forest beside a wider young man who is also a meeting point for fur clumps. The boys emit carved white puffs when they talk, and they're walking fast. I have no idea what they're talking about or where they're going.

“It's unthinkable, Your Grace!” protests a bald man beside a candle, his beard agitated. “To fell the White Wood for the sake of your Shining Goddess—why, the moorfolk would rise, and with them half the bannermen. With cause!” “Have a care, Ser Kevvan,” barks another bald man, gaze pushing past his candle (he has one too) to lock eyes with the first man. “My family has ruled Etherly Crest since before the Bear danced with the Spider on the pennants in Balamark Place. To question our directives would be”—a cutthroat appears from nowhere and places his blade below the chin of the first bald man—“injudicious.”

“Oww, my lord! Oww, my lord!” says a young woman whose face and shoulders come dangerously near a bed's headboard, then away, back and forth. Ribs like slats are on view: his, hers. “Aye,” he says, or rather “Ayyyeeee.”

“The wildings and the egret tribes are on the march,” says the wider of the two young men in the forest. “Unless we find Grent and Turbb and Brock and Maester Winwod and-—”

The bald man buck forward, blood spurting as the cutthroat draws his knife across and up. The blood looks like two quarts of red cottage cheese, and it puts out the candle nearest him.