Avatar Skimps on Story for Spectacle 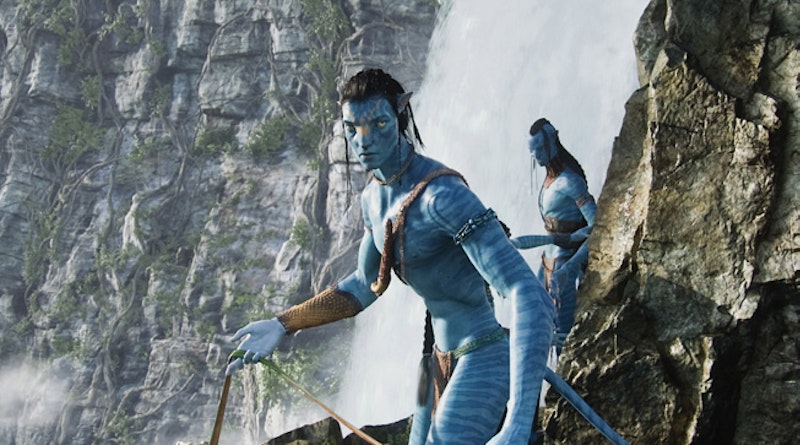 I’m a lenient grader. I tend to evaluate films on their own terms. I watched Transformers II and managed to keep my lunch down. I even defended The Women, Lord help me. I'm not a snob.

I didn’t hate Avatar. I liked it. Avatar is a great cinematic experience. Everything you've heard is true: the visuals are spectacular and immersive. Many times I completely forgot I was watching computer-generated images. Even now I think of Avatar not so much as digitally rendered as impressively filmed and created.

But I didn't love it, and that's a problem. I feel the need to counteract a lot of the raves I've been hearing and reading. A film is more than visuals, I don't care how sleek they are and how many innovations it pioneered. A great film needs a good story, and here I found Avatar ultimately lacking.

I wasn't expecting 2001: A Space Odyssey. I went into Avatar knowing the story would be fairly predictable—the good guys would win. You don't spend $500 million making and marketing a movie to take chances with the narrative. You hew to convention.

The problem is, Avatar left me cold—and I wasn't the only one. Sure, the fanboys at the midnight screening I saw loved it. But they also laughed through every sentimental moment: the "blue people lovemaking" scene elicited pure guffaws. This was more than a case of immature college boys with low emotional IQs. Unlike the similarly conventional Titanic, James Cameron does not lay a strong enough emotional foundation for his story. The lead Jake Scully is a blank canvas. Sure, we hear about his thoughts through his video diaries—a plot device, by the way, usually tossed aside for being too expository—but we never get a sense of who he is. We don't know his thoughts about the planet before he arrives, only that he wants to escape Earth. He's a willing solider, but he's open to new experiences. This is all we know. His eventual transformation, then, has no emotional heft. His love for Neytiri is empty. This character oversight calls into question the entire premise of plot. No one seems to be talking about this.
Let's move on. How about the much-ballyhooed environmentalist narrative? It's true that Avatar is a green film in a fairly inventive way. The idea is: everything on Pandora, planet of the blue people, is literally interconnected and pregnant with history, like nerves in the brain. Destroying one tree harms all living things. Nice message. Yet for me the film's exotica of Pandora means this message doesn't hit home. Pandora is so unlike Earth we cannot link the two conceptually.

What about the anti-corporate and anti-colonialism message? These are solid themes, but again, the whole thing feels so stale, so 19th century, and something I've seen in films before. Indeed, in a critique a little harsher than I would give, sci-fi blog io9 lays out the problem with Avatar's take on colonialism:

These are movies about white guilt. Our main white characters realize they are complicit in a system which is destroying aliens, AKA people of color - their cultures, their habitats, and their populations. The whites realize this when they begin to assimilate into the "alien" cultures and see things from a new perspective. To purge their overwhelming sense of guilt, they switch sides, become "race traitors," and fight against their old comrades. But then they go beyond assimilation and become leaders of the people they once oppressed.

That's more blunt than I would put it. Still, I would agree Avatar doesn't really care about the Na'vi, the blue people. They are simple and stereotypical: connected to the Earth, pure, the noble savage. It's not the worst stereotype, but it makes for pretty uninteresting cinema. Is Avatar is "racist"? No. First, the blue people are racially ambiguous enough to deflect criticism. Good move, Cameron. What I'm saying is we've seen this before, and it's getting old. It's Pocahontas all over again, or, as io9 points out, Dances with Wolves, Dune, The Last Samurai, Enemy Mine and, most acutely for me, District 9. That's right, they made this same movie a few months ago!

All this would be fine if Avatar was just another $100 million sci-fi flick looking to get fanboys excited and buying more video games. But this film is supposed to "change cinema" and they spent a good half billion making sure it does. So why not shell out a few extra thousand and get a good writer to thicken the story a bit? How about giving the viewer some tiny innovation? Like maybe the natives of Pandora are divided over what their planet means and how their environment works? Or maybe our protagonist isn't a man but a woman who falls for a native blue male? Or maybe the big bad corporation isn't all white but instead more multicultural—maybe the evil general's a black dude (or a black woman!)? Maybe Neytiri isn't a religious icon (a voodoo warrior?) but a scientist like Sigourney Weaver's character?

When a movie has pretensions of cultural worth, I expect it to be creative—and not just visually. I want something emotionally deep—even Titanic brought audiences close to crying—not a carbon-copy of a dozen movies I've seen before and ruled out as dull or problematic.

Should you see Avatar? Sure. You will enjoy it. It's a sight to see. You, of course, must see it in 3D, and, after seeing it in a regular theater, I'm pretty sure you need to see it in IMAX (which brings up a whole other set of issues). But I expected more, because I was promised more—over 10 years in the making!—and, no, I don't think it will change cinema.