Pixar's Lightyear is more impressive as an act of corporate brand expansion than as a movie itself. 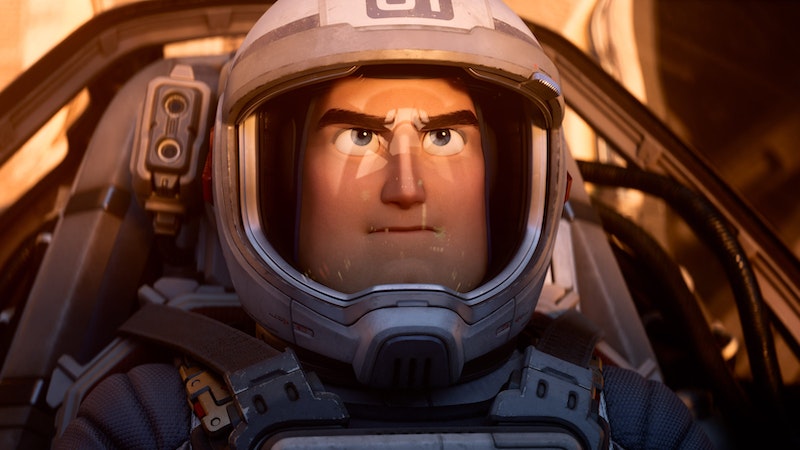 The new Pixar film Lightyear is less impressive as a movie than a feat of creative corporate brand extension. It’s sort of a spinoff of Pixar’s four-film Toy Story franchise, the one that started it all for the studio back in 1995. The idea is that the Toy Story characters were all toys, and that Buzz Lightyear, the “space ranger” toy, was created as a tie-in with a then-popular movie. Lightyear, as presented now, is that movie. (Unlike the last few Pixar film—all of which, Luca, Soul and Turning Red, were outstanding—Lightyear has a theatrical release instead of going straight to Disney+.)

The plot leads into the sort of sci-fi moral dilemma that wouldn’t have been out of place in an episode of Star Trek: The Next Generation. Buzz works for the Federation-like Star Command, where he’s sent on a series of missions that, due to Interstellar-like time travel paradoxes, lead to decades passing for him. He ends up in conflict with mysterious Zurg, who commands a robotic fleet, with Zurg’s identity coming as a surprise reveal. Again, shades of Picard-era Star Trek, it leads up to a sci-fi-based stark moral choice. It’s not a bad idea, with Buzz getting a slightly different look, and Chris Evans stepping in to do the voice, in place of Tim Allen. The problem is that the plot is a slight, perfunctory space adventure, one that doesn’t have enough to sustain an entire film. Lightyear also doesn’t have the Pixar touch in any way. While the conclusion’s sweet, it lacks an emotional punch.

Even worse, there’s nothing about the story that anchors it in 1995, which is a missed opportunity. There could’ve been a way to make Lightyear a parody of the Bruckheimer-style action cinema of the time—with a wisecracking villain, red digital countdown clocks and a Mexican standoff at the end—but it doesn’t happen. Nothing in Lightyear is as compelling as Buzz’s arc when he was a toy, and specifically his existential crisis, across multiple movies, about discovering that he’s not really a space ranger, and actually a “child’s plaything.” The most interesting thing about Lightyear is the one that’s the most controversial.

Disney’s made a habit in recent years of having minor characters mention in passing that they're gay. The company then touts that as a victory for representation, even if these characters don't have a name or any other notable character traits, without factoring much into the plot of the movie. This is destined to make nobody happy. Lightyear is a bit different. It introduces a character, Buzz’s partner Alisha Hawthorne (Uzo Aduba), who it's established has a female life partner. But not only does it make Alisha multi-faceted, but it also gives that character a loving multi-generational family—something that the movie considers so sacrosanct that the hero's major third act decision is dedicated to preserving it. This also promotes values—emphasizing family above all—that I used to think were conservative. This LGBTQ representation is organic and earned, and it's a much better effort at that than, say, a same-sex kiss in a Star Wars movie between two characters whose names we don't know.

Yet in the era of Don't Say Gay, this gets Disney accused of grave sex crimes by some of the most vile, bad-faith people in politics and the media. It's worth noting the film was banned in countries like China and the United Arab Emirates. Led by the ridiculous Ben Shapiro, American social conservatives—whose views on LGBTQ rights are uncomfortably close to those of the world’s most tyrannical governments— have alleged that Lightyear is pushing a "gay agenda" by including gay characters, two of whom kiss at one point. This is nonsense, but in this particular case it's even more insidious than that.

As for the film's other culture war flashpoint, I'm guessing the replacement of Tim Allen as the voice of Buzz with Chris Evans has more to do with Evans being more of a star these days than Allen than it does with the latter actor's conservatism. John Ratzenberger, who's a longtime right-winger, has done voice work in Pixar movies for the company's entire history. But this didn’t stop Patricia Heaton from accusing Disney of working to “castrate” (?) the iconic character of Buzz. Lightyear is ultimately too slight to work, but it does nail that one topic.