Portlandia through the eyes of a former Portland resident and semi reformed hipster. 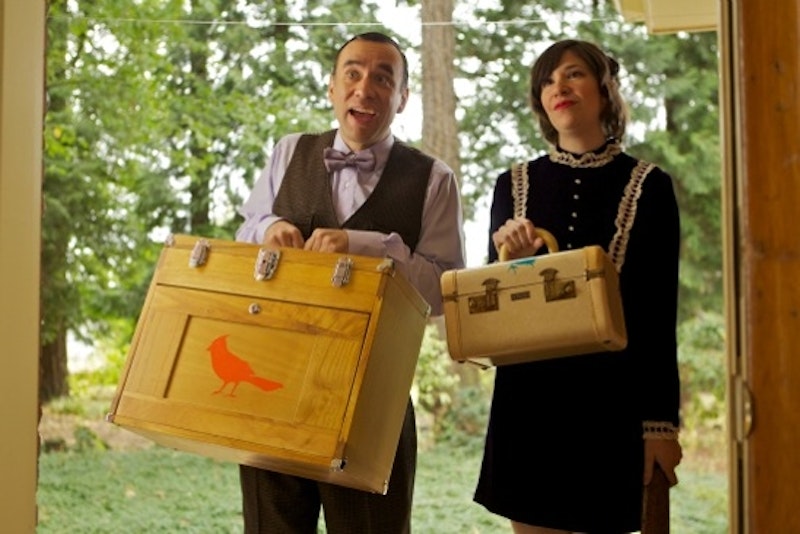 I lived in Portland for just two years, although it’s hard to imagine that so many bad things happened in such a short amount of time. Most of the bad things were a direct result of my actions—or, more precisely, a direct result of my alcohol consumption, which was high, though in no way atypical in Portland. Actually, not all of the bad things were a direct result of my decision to, say, quit a full-time job with benefits and a company cell phone because working before noon was incompatible with my hangover. There was, for instance, the time the sewage main in my apartment building backed up into the drain in my bathtub, which felt like the city itself was shitting on me. This situation certainly wasn’t helped by drinking all day while I waited for the plumber—I peed in the alley next to my building in full daylight, twice—but most of the other bad shit was my fault.

Still, even though I now recognize that the problem was me, and not Portland, I find the love affair everyone under 50 and to the left of Congress has with the city an annoying reminder of two really bad years. For this reason, I avoided watching the first season of Portlandia, which seemed like a TV version of a Keep Portland Weird bumper sticker: tacky, self-congratulatory, and, like the city itself, not really funny. But after reading Margaret Talbot’s recent New Yorker profile of Portlandia creators Carrie Brownstein, the former guitar player from Sleater Kinney, and Fred Armisen, the not-famous guy from SNL, I decided to try it out. Besides, it’s been four years since I moved and it’s not as if Portland broke up with me, right? I mean, I’m the one who left. Surely I could handle a few hours of Portlandia landscapes, which look nothing like the city for the 10 months of the year when it is choked by drizzle, without collapsing into my dislike for the city, which started soon after my girlfriend kicked me out.

Portlandia is a sketch comedy show with Brownstein and Armisen doing caricatures of Portland’s subcultures. You have the ultra-feminists, the fixed-gear cyclists, the dumpster-divers, and players in an adult hide-‘n’-seek league acting, respectively, neurotic, obnoxious, disgusting, and infantile. The sketches are all pretty much the same: take a stereotype and stretch it to the extreme. Make the people who quiz servers about the origin of their chicken leave the table to check out the chicken’s free-range home for themselves. Take the couple who pickles everything and make them pickle everything. This formula was funny for a minute before I got bored and started tallying the number of times I wrecked my bike on the streetcar tracks after getting shitfaced with a bunch of strangers when I lived in Portland. Better than the actual show is the synopsis from Talbot, who writes that it’s about “campaigners against any theoretical attempt to bring the Olympics to Portland and animal lovers so out of touch that they free a pet dog tied up outside a restaurant,” which does sound pretty funny.

What should be enjoyable about Portlandia is that, even as a farce, it shows a place not so different from many other left-leaning cities and towns. Sure, Portland is quirky with its sanctioned pillow fights and double-decker bikes, but it’s no quirkier than Asheville, where I periodically attended college while dumpster-diving everything from bagels to sushi, worked in a lesbian bookstore, and judged women who shaved their armpits. Portlandia could be about Carborro, North Carolina, where I moved after Portland: a town of 20,000 people that passed a resolution opposing the Iraq War and where a completely unqualified transgendered woman came close to winning the 2008 mayoral race because how cool would it be to have a trans mayor? Portland’s just not that different. It may be known for its multitude of drummers with tattoos of inanimate objects, but you see just as many toasters with wings on peoples’ biceps and Eat Local tote-bags at the farmer’s market in Durham, North Carolina, where the hot social event is vegan brunch at the queer bar. But more so than yogis and cyclists and kombucha babies, what cities like Portland and Asheville, Carrboro and Durham, San Francisco and Austin have in common is an immense love of self. People are just so proud to live in all these places. And this is what I dislike about Portlandia: the show pokes fun at hipsters and freegans and earnestness itself, but it does so while patting itself on the back for being just so special.

The sketches that succeed do so because they are less about Portland and more about Portlandia’s audience. One of my favorites is “Did You Read That,” in which Brownstein and Armisen battle each other across a table: Did read that thing in the New Yorker last week about how golf is an analogy for marriage? Did you read the thing in McSweeney's comparing CD tracks and album tracks? Did you read that thing in Mother Jones? Did you read that thing in Spin? Paste? Dwell? The New York Times? The Wall Street Journal? The phone book? That fortune cookie? Those menus? As someone who frequently—though with embarrassment—starts conversations with, “So I was reading this piece in The New Yorker,” this skit made me laugh. It was, after all, about me. And that’s why Portlandia appeals to people: we all like to see ourselves. The same people who are laughing at “We Can Pickle That!” are people who actually can pickle that. But I don’t pickle and I’m not vegan; I haven’t dumpster-dived since college and I’ve been shaving my armpits for years. So maybe that’s why I dislike Portland and Portlandia: they represent a type of person who I fundamentally am not, those with optimism and a passion for their home and the honest belief that what the world needs is more birds on things.