In Search of Indie Cosmic Film 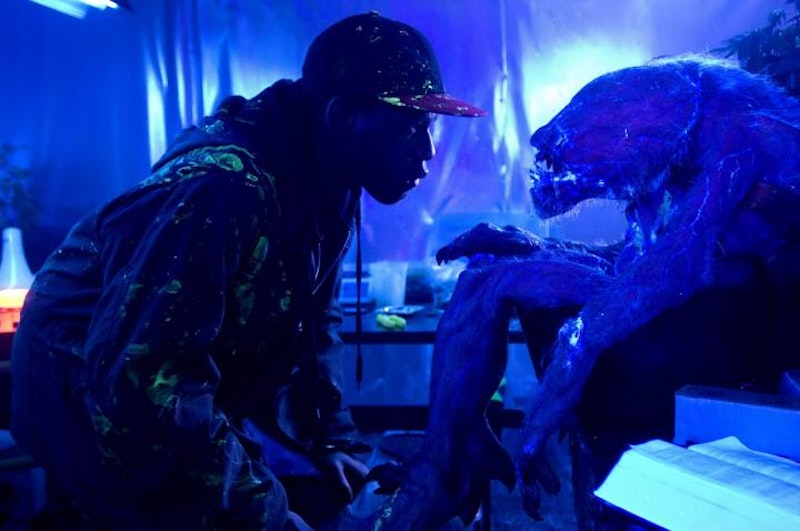 Indie film tends toward realism. It’s not hard to understand why: on a low-budget, the special effects necessary for fantasy and science fiction are hard to achieve.

Creative filmmakers aren’t afraid of a challenge, though. In recent years, and especially 2011, a handful of art house movies ventured into the cosmic, breathing epic life into intimate stories.

My interest in indie cosmic emerged after watching the little-seen Rachel Weisz vehicle Agora, about the philosopher Hypatia, known for her pioneering work on astronomy and mathematics. The story centers on the fall of the Roman Empire and onset of the Dark Ages, as intellectualism and cosmopolitanism met a precipitous decline (so the movie argues). Hypatia thinks through big ideas—what is the Earth’s shape and movement?—while civilization falls apart. The film puts this microdrama into grand perspective with numerous, operatic shots of the Earth from space. Not exactly science fiction, but gesturing heavily toward the cosmic.

hen, suddenly this year, indie cosmic was everywhere: in the portentous delusions of Michael Shannon’s character in Take Shelter, the arrival of an alternate universe in Another Earth, the prehistoric fantasies of Tree of Life, the threat of interplanetary destruction in Melancholia and the green-eyed aliens of Attack the Block. Each film used silent and minuscule dramas to draw us in but expanded our perspective with simple images of other worlds, extraterrestrial creatures and events.

Sci-fi is at its best when it forces cultural introspection, encouraging us to question who we are and why we do the things we do. Take Shelter might have achieved this best, using surrealism to have us question our reality and sanity, a broader metaphor for our chaotic political and environmental moment. Michael Shannon’s Curtis believes the apocalypse is near and in preparation breaks numerous social and economic norms—going into debt, violating work rules, taking unnecessary survivalist precaution. We don’t know the metaphorical flavor of Curtis’ resistance (paranoia or justifiable fear) but the film’s final, fantastical moment likely gives us an answer.

Less effective were, according to many critics, Tree of Life, Another Earth and Melancholia. I appreciated Lars von Trier’s story of the end of the world as a meditation on coming to terms with death, but he stymied his critique of the 1% by adopting an earnest perspective on thoroughly unlikable people (better to go Bunuel, with a camp perspective of the unlikable bourgeoisie). Both Another Earth and Tree of Life have been criticized for lacking cohesion, and Tree of Life in particular excelled only in its hyper-realistic and intimate portrait of a family in 1950s Texas. When he reached for the stars, Terrence Malick’s trademark diversions left me cold.

The must-see indie cosmic film this year has to be the witty, dark and provocative Attack the Block, a “midnight movie” about aliens attacking the ‘hood. It poses a simple question: why, in cinema, do monsters only attack rich areas like Manhattan or London? The answer—because those are the places people care about—propels Attack the Block forward. Set in government housing in London, the movie shows how young, “delinquent” teens have to fend for themselves when the state doesn’t care. As the chaos unfolds, the police focus more about arresting young black kids for petty crimes than stopping an army of monsters from destroying half the city. In trying to prevent the end of the world in face of government indifference, the kids too learn something about the “other,” and a savior by the name of Moses, steps up to the plate. I won’t spoil it, but the last scene is a powerful yet ambivalent statement that in many ways foreshadowed the London riots a few months later. Think Misfits with a stronger political edge.

As digital post-production becomes cheaper—shorts like Alive in Joburg and Plot Device attest to the democratization of special effects—more indie films will experiment sci-fi and fantasy. I hope this will help stanch the monotonous stream of pseudo-realist movies about aimless thirtysomethings who don’t know how to dress and propel independent storytelling to tell larger stories with broader import and artistry.