A Test of Faith

Big Fan is less about football and more about how we process morality differently. 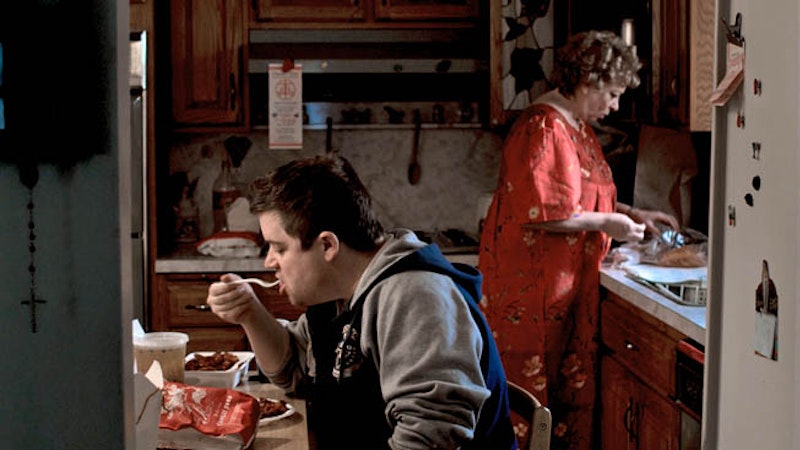 Despite the billing on Netflix and the comedic backgrounds of both star and director, Big Fan is decidedly not a comedy. Starring stand-up comic Patton Oswalt as Paul Aufiero and Daniel Corrigan (Goodfellas, Trees Lounge, Buffalo 66) as his best friend Sal, the film is an extremely quiet, creepy little thriller (consider that Robert D. Siegel, a former Onion editor and screenwriter of The Wrestler, wrote and directed the film). A lot of the film’s creepiness is due to Oswalt, whose pouty face, almost characteristic of people with Fetal Alcohol Syndrome, twists and grimaces while he's not watching football, and then devolves into a babyish, contented smile when he is.

The first voice you hear at the beginning of the film is Paul's. He says, "I can't tell you how sick I am," and then repeats the words very slowly—"I can't tell you how sick I am." At first, you think the fourth wall is being broken, that Paul is talking directly to the audience. This is no accident. Although it’s soon revealed that Paul is practicing a speech about the upcoming Giants-Eagles game he’s to deliver on a late-night call-in radio show called Sports Dog, it is Oswalt's voice, at once doughy and extremely tense, that recalls the confessionals and secret diaries of the perpetrators of heinous crimes; office and school shootings and people "going postal"—not the rants typical of sports radio—and it is clear from this moment on that Paul Aufiero takes the Giants way too seriously.

He works in a parking garage, which lets him listen to the radio and work on his call-in speeches, and presumably provides him with enough money to eat pizza and drink Mountain Dew to his heart's content. In his mid-30s, he lives with his mother on Staten Island. He is constantly chastised by his personal injury lawyer brother and mother for not having a real job, a wife or family. Paul wants none of these things; in fact, he seems to detest them, rolling his eyes during his nephew's birthday party when his brother-in-law offers him a job at Costco, Paul replies, "What if I feel bad for you? What if I offer you a job?" The only thing in his life that seems to give it any meaning, to give him any pleasure or satisfaction, is football.

But this film isn't just about fandom, or fan culture. In fact, for a film having to do with football, remarkably, there is not a single shot of the game being played. One particularly heart-breaking scene is when Sal and Paul go to the Meadowlands on game day. There are lots of elliptical shots of people tailgating, grilling sausages, drinking beer and the like. The camera follows the two of them through the crowd. When Paul declares that its time they got to their seats, we cut to a pair of jumper cables hooked up to Paul's car, powering a television and we realize that Sal and Paul, probably too poor to pay for tickets, have to watch the game from lawn chairs in the parking lot.

This is what happens: one night, Paul and Sal spot their favorite player, Quantrell Bishop, at a gas station in Staten Island. They follow him first to what looks like a drug deal and then later to a strip club in Manhattan where they finally work up the courage to approach him. When they do, Paul mistakenly lets slip that he and Sal followed him there from Staten Island. Bishop is enraged and beats Paul senseless. He wakes up three days later in the hospital after having his brained drained of blood from a hematoma.

His brother wants him to sue. The police want to arrest Bishop and charge him with aggravated assault and put him in prison. But Paul resists, avoiding contact with the outside world and a press that is eager to meet the man who was beaten within an inch of his life by his biggest hero. For some of us not as into sports, it would be like getting assaulted by Wes Anderson, or getting clocked in the jaw by, oh, say, Billy Collins or Nora Ephron.

It is a crisis of faith: Bishop is the Giants' best player and if Paul presses charges, his favorite team will surely lose. From here, the film is awash in grays and low-lit extreme close-ups. There are hints that Paul might have brain damage: a high-pitched, ringing tone plays during scenes of him clutching his skull, taking his pills; he passes out in a pizza parlor and claims that it is unrelated to the trauma which he has just undergone.  This whole time, Paul has been sparring with another caller on Sports Dog, a Philadelphia Eagles fan, who exposes Paul's identity on the show to be that of the same person assaulted by Bishop. When the goading becomes too much, he leaves his house with a gun and drives to Philly to track "Philadelphia Phil" down.
What's so unsettling about the film, and perhaps its most special quality, is Siegel's refusal to pass judgment on his subject—similarly, we are unable to conclude whether or not Paul is possibly psychotic or an extremely ethical human being as he struggles to place himself in a larger context. What's right to him is not necessarily what's right to us. "I don't want to be one of those assholes who sues Burger King when their Whopper's too hot," he says at one point.

The texture of the film is wonderful; distinctly New York, the palate is very much like Vincent Gallo's classic Buffalo 66, A Guide to Recognizing Your Saints and perhaps Kids. Formally, and also content-wise, Big Fan is very similar to P.T. Anderson's Punch Drunk Love: both star comedians and concern a growing archetypical figure in film these days: the faceless, the boring—where once we were captivated by the stories of the sports players themselves, now the focus has switched to the people in the stands.