Where Have All the Boys Gone?

Wrapped in cords and narcotized by screens, the male population of college campuses are rarely seen in daylight. A woman's perspective from The Whitman Pioneer. 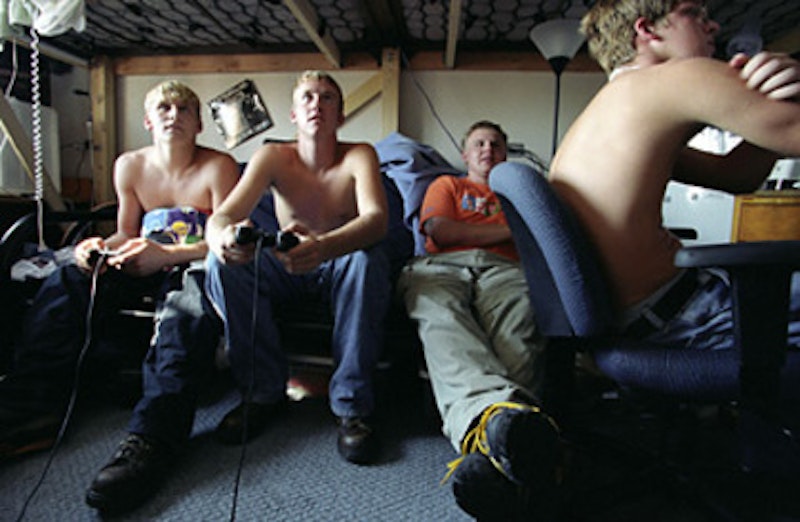 It has come to my attention that some boys are frequently preoccupied; they only show up to eat their daily meals and then mysteriously disappear. Their appearances are becoming barely more regular than the presence of a blue moon. The reason for this odd behavior is not a living, breathing organism with a pulse. No, instead the culprit is a massive pile of twisted and tangled cords belonging to Playstations, Xboxes, Nintendo 64s and their respective controllers.

Although video gaming seems rather foreign to a large proportion of the Whitman
community, I am pretty partial to the idea of sitting around multiple hours a day kicking it on Super Smash Bros. I remember when I used to think that video gaming was merely a silly pastime that people partook in. What I’ve realized recently, however, is that video gaming has become a form of lifestyle more than a routine activity.

What I’ve learned, thanks to the many years of living with my brother, is that there is even a language that gamers use. For example: pwn (p?n) v. pwn•ing, pwn•age, pwned to beat someone (very badly) Slang. n00b (n??b) n. somebody who lacks experience or skill (often both) in a game. 1337 or leet (l?t) adj. Used to describe a talented, very skilled player.

“N00bs will get pwned by 1337 gamers,” explained Matt Badura, a first-year and Jewett 3 East resident.

So the question I ask is this: To what extent are Whitties involved in playing video games and why?

Although Whitman, as a whole, is not as immersed in video game culture as I would have thought, there are still pockets on campus where video games are known to be played more frequently.

Take, for example, the people in the Marcus House who avidly play Guitar Hero (“on Hard/Expert level,” said Karl Wallulis, a sophomore Marcus House resident) and Super Smash Bros. Melee when they take breaks from their studies.

Many Whitties claim that they play these games when they relax or feel stressed: “It’s an easy way to kick back, forget about the looming assignments due tomorrow and escape from some of the more pressing concerns of life,” said Badura.

In other words, it provides a fantastic form of procrastination.

“When it really comes down to it I would say pure enjoyment,” said first-year Johnny Zimmerman from Anderson C section. “I have definitely been playing less video games since I have come to college because there is a lot more to do here outside of gaming, but at the same time real life doesn’t offer some of the fantasy and amazement they offer.”

Another reason is the camaraderie that grows from multiple hours of gaming.

“It’s similar to a lot of other activities on campus,” said first-year Chris Hansman from Jewett 2 West. “In other activities like sports people bond with one another. Playing video games with others isn’t much different.”

“One could even argue that video gaming can allow for more social contact and conversation than sports because in sports you are often times too busy with physical exertion to pause and chat,” added Zimmerman.

There has been the production of more versatile games that are now available for the everyday consumer. There are consoles now like the Wii, which offers a wide variety of games, such as tennis and Mario. For a taste of music, there is Guitar Hero, which gives you the illusion that you are playing the guitar like a pro.

Then there are always the shooting games like Halo, and the classic Super Smash Bros., a game where you take on the character of one of a variety of creatures (a few examples being a pink puff ball named Kirby, an alien kid named Ness, or the big gorilla Donkey Kong), fight with one another, and see who can get the most kills and/or stay alive the longest. It sounds ridiculous, but it’s probably one of the best games around.

Needless to say, playing video games, even for me, is pretty much the most fun way to spend time, but it’s more of an indoor activity; it’s mainly useful during the times when it’s cold and the sky looks like a murky shade of grey. But it’s March already and soon the weather is going to become beautiful again and the sun will come out, people will be sunbathing on Ankeny and Frisbee golfers will be out in packs playing their games. We can only hope that the majority of the Playstation and Xbox fans will be enjoying the spring weather.

And if not, then I’m sure they’ll be pwning n00bs and enjoying themselves nonetheless.