A Canadian student faces expulsion for organizing a chemistry lab discussion group on Facebook. He says it's just the equivalent of an online study session, but the administration disagrees. From The Varsity. 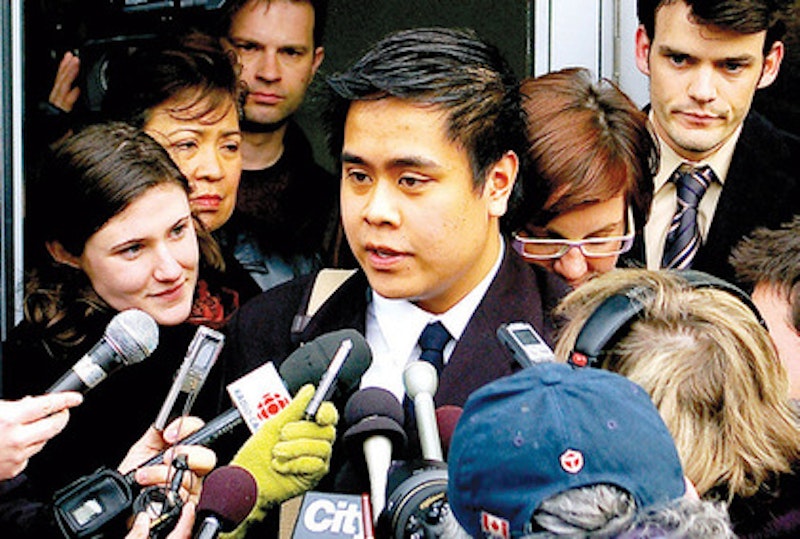 As Chris Avenir walked out of Tuesday’s appeals committee hearing, the 40 or so students gathered behind a sea of reporters erupted in cheers and applause.

“I feel pretty confident and optimistic about the meeting,” said Mr. Avenir smiling. “I don’t have any regrets about what happened inside.”

The committee, composed of three professors from the engineering faculty, will now have up to five days in order to render a decision on the charge of academic misconduct against Avenir.

They can completely exonerate Mr. Avenir, expel him, or propose a broad range of other disciplinary measures. If the appeals committee recommends Avenir’s expulsion, the case is automatically sent to the school’s senate. In this case, it could take up to a month for Ryerson to reach a final decision.

“We are hopeful that they will render a fair decision, which is to exonerate Chris,” said John Adair, Avenir’s lawyer. Ryerson regulations barred Adair from speaking on Avenir’s behalf at the hearing.. “We are tremendously disappointed in the process. The university’s rules preclude Chris from being represented by a lawyer today. We think this is akin to requiring Chris to respond with both hands tied behind his back.”

Mr. Avenir is charged with one count of academic misconduct, for being the administrator of the Facebook group “Dungeons/Mastering Chemistry Solutions,” which, at its peak, had 147 members from Ryerson’s first-year chemistry class.

“From what we know of the case there is nothing to indicate that students were doing anything that was inappropriate,” said Nora Loreto, president of the Ryerson Students’ Union. “The evidence against Chris at this point is literally the [existence of the] group, the description of the group, and the members of the group.”

Another problem in Ryerson’s case is the question of what constitutes an academic offence. Although James Norrie, a Ryerson spokesman, summed it up pithily as “cheating,” many have a hard time seeing how Mr. Avenir’s case qualifies as such.

The Facebook group discussed the lab section of the course, which was evaluated based on individual problem sets assigned to students. Each student got the same questions, but with different numbers so that they would each hand in different solutions.

Avenir’s defenders say the university is unreasonable in claiming that a member of the Facebook group would have benefited unfairly from seeing the solutions to a problem different from their own. Furthermore, Avenir has claimed that no full solutions were actually posted.

“I’m getting emails, phone calls from students saying, ‘you’ve got to be kidding, there’s got to be something else in the case. He must have done something.’ No, quite literally, it was a study group and they talked about how to understand the formulas,” said Loreto.

Among students, sentiments of dissatisfaction or downright outrage with Ryerson’s actions have spawned a number of sympathy groups dedicated to supporting Avenir. One of these, chrisdidntcheat.com, sells tshirts and hats advocating that particular view. On Facebook, the group “Support Chris Avenir” had 1210 members as of press time. Avenir himself posts regularly.

Ryerson has also been accused of being backward-looking on issues surrounding the Internet. Other universities have moved to integrate the Internet into their teaching approach to better cater to students’ needs and regulate web use. At the beginning of this academic year, the University of Western Ontario set up 25 universityrun Facebook study groups for large first-year courses in order to centralize and oversee much of the online activity among those students.