The bullying of bus monitor Karen Klein is just what you'd expect in a society that extols humiliation. 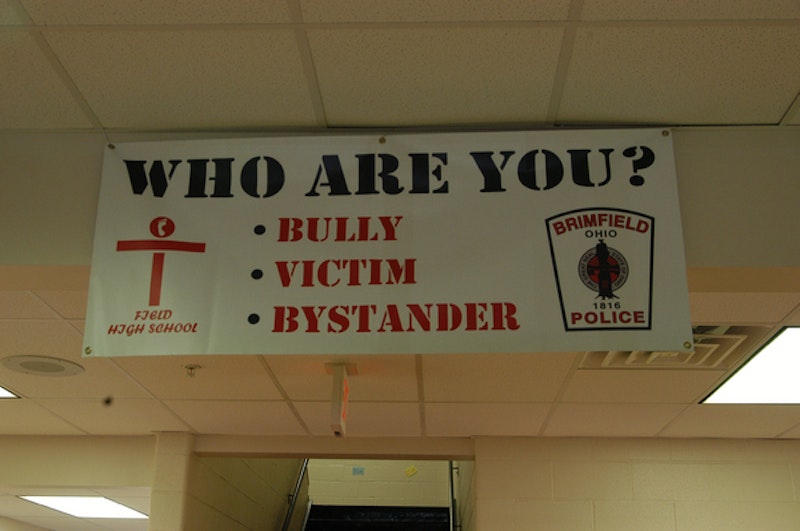 Finally, a viral YouTube video featuring humiliation and dehumanization has led to condemnation of the clip's producers. When bus monitor Karen Klein's verbal abusers uploaded roughly 10 minutes of her victimization for their friends, family, and the rest of the world to see, instead of eliciting laughter at harassment endured by the elderly and overweight target as was intended, anger was quickly directed in the perpetrators' direction. Further complicating the issue is that the abusers were junior high school students barely in their teens and the victim was tasked with maintaining authority over them.

Aside from those details, what unfolds on the video is frustratingly typical. For all the usual hand-wringing about "bullying" and children not respecting their elders, the perps are merely trying out the roles that have been modeled for them by a culture largely defined by male power. They didn't see an "elder" and they certainly didn't see an authority figure, as if she had been a teacher or principal. She was someone who posed no threat at getting them in trouble and committed the great cultural sin of being female, overweight, and a senior citizen.

Maybe they learned some of their "jokes" from their older brothers, fathers or little league coaches. This attitude isn't specific to any particular generation, though it's sobering to realize that these are children who have never known a world without Family Guy. It's not even exclusive to men and boys, though they do make up an overwhelming percentage of street harassers and find encouragement in every direction to make remarks about women's bodies and age and appearance. The most telling detail about this story is that these boys apparently had no concept that what they were doing was unacceptable; they recorded the harassment and from all appearances were proud of the sadism and budding anti-social behavior they exhibited.

It's not appropriate to make any predictions about what sort of men these boys will grow up to be. But apart from this one viral internet craze controversy it's likely they've engaged in similar behavior, perhaps even with the same bus monitor, without ever being punished. This sort of conduct isn't and example of "kids being kids," it's "kids starting to act like adults."

The outpouring of sympathy towards Klein is fortunate if somewhat ostentatious. Because the story involves details that can be shoehorned into pieces about "cyberbullying," and because of the sheer viciousness the video captures, it's receiving a disproportionate amount of coverage. It's tempting to think of the outrage provoked by this story as a positive step, but the outrage is directed at the kids themselves (whose "punishment" is up to the school) when they're just the younger participants in a long tradition of public shaming of women's appearances.

Every day men make violent, insulting, and sexually explicit remarks towards women for the purposes of humiliating them and amusing themselves and their peers. Anything from a woman's appearance, to how she dresses, her weight, her age, sexual identity, or her disability is subject to open ridicule by strangers and acquaintances alike. Some do it on the street, some do it in elevators or subway stations or city buses, and some do it in offices or courtrooms. Not every man does it and not every woman is equally affected by it, but the problem is deeply systemic and children can only be expected to learn from what they see.