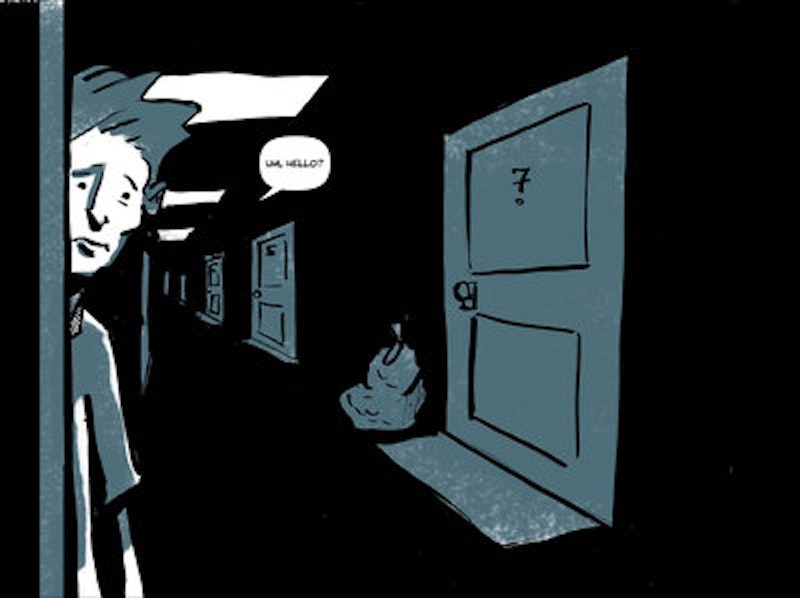 For many graduates, student loan debt is a bleak, bloated shroud. It cuts off alternatives and shadows every choice with anxiety. Debt, in other words, is a kind of personalized future dystopia—an insight that powers Christopher Kosek's digital comic The Default Trigger. In Kosek's near/alternate future, debt becomes the lever for worldwide destruction, as promising young students agree to shady government brain-wiping in return for debt forgiveness, not knowing that it's all a front to prepare human shells for alien visitors.

Or something like that. The exact details of the plot are a little hazy. Joseph Doakes, a recent graduate who can't find a job, receives a text message offering to forgive his loans if he agrees to go on a two-week program in which he won't be "allowed" to remember. The gray, white and black art shows Doakes and other angular, blocky young people chatting about their future options against blank backgrounds.

Eventually the view pulls back and we see a generic campus which seems on the verge of dissolving into shadows and lines, as if it's an only partially realized sketch. A black figure with a graduate hat stands against white rectangles—and then Doakes is talking to his mother about a job he doesn't remember having taken. There are blackouts and unsettling one-liners ("We just can't be sure if he'll survive another aneurism. This is troubling for us.") but few specifics. The reader, like Doakes, is adrift in alternating white space and dark space. "At times I felt I was living through dreams."

To some degree you can see the failure to articulate the plot as a frustrating aesthetic misstep. Kosek's storytelling does often seem clumsy, as in one page that shows a hand holding a cell phone next to a long string of text, as if the creator couldn't quite figure out how to turn his ideas into comics and so just punted.

But the amateur construction, like the vagueness of Doakes' plight, can also be seen as thematic. This is a book, after all, about college graduates and their futures. The hesitant, half-formed nature of both the art and the writing fits the tale of poor Doakes, trying to get some job (he can't even remember which) and start his life. His blackouts, too, and the vague, unstable threat make the whole comic seem like a wavering possibility rather than a story, as if Doakes is looking ahead dimly to what may or may not happen, as confused as any other recent graduate. The alien invasion could be seen not as a nightmare vision but as a goofy, hopeful daydream. The world will be destroyed, but at least Doakes won't have to pay his debts off. He's part of a foul and overarching plot, rather than just a cog in a system that works to ensure he'll toil at a boring desk job and not make waves. Who wouldn't take a sci-fi apocalypse over the mundane oppressions of everyday boredom?

At the end of the comic, the evil controllers set Doakes free, and he’s on an alterna-press junket babbling about the end of the world. "Maybe he'll start a blog," the bad guys snicker. "We all love a good conspiracy theory." You can, then, imagine Doakes himself as the author of the Default Trigger, warning you of conspiracy theories as a distraction from the real, exactly identical conspiracy. While you're reading this comic, all those college kids are going to have their minds taken over by the aliens known as "adults." The Default Trigger presents growing up as a confused, bureaucratic nightmare. Debt, perhaps, has become our symbolic rite of passage, and you only know you're mature when you owe your dreams to a government lender.