The iNightmare: A Fugue State

Siri is an incompetent enabler in our 21st century tech reality. 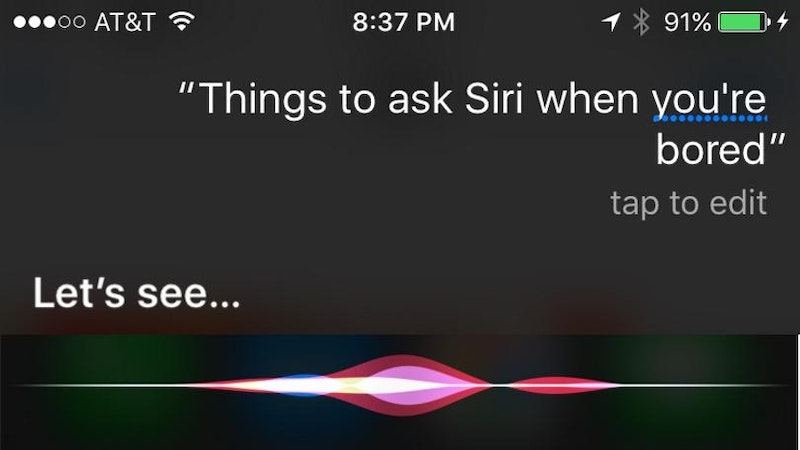 My AirPods are slightly heated in their smooth, capsule-like case. I’ve been charging them wirelessly, on a wireless pad, which is of course attached to a wire. They sit atop the pad and charge. This is slower than directly attaching them to the same wire. I pick them up. The case is only vaguely charged. I fish the AirPods out and set my case back down. An amber light goes on in the middle of it.

I pick the album Psychocandy, by The Jesus and Mary Chain. I play it at low volume. There are whispers of almost inaudible bass. I push my fingers into my ears to see if this helps the sound. It does. Then I let go, and the sound becomes tinnier, which bothers me because I can’t keep my fingers jammed in my ears.

I think about selling them, but my name has been engraved on the capsule case. This was done in Shanghai. I followed the package all the way from there to East Hampton, where it was delivered to me on time, in fact days ahead of schedule.

My wife is talking to me. I take out one AirPod and the music stops immediately. I set it down on the bedside table and it continues to leak charge, which is bad, because it wasn’t charged fully to begin with. I nod and become annoyed with my wife. She finally finishes talking. I put the AirPod in again and the music resumes. We are in the middle of a song

Talking to Siri is easy. I set a reminder for the morning. I worry that in the morning I won’t be wearing the AirPods and won’t hear the reminder. I fall asleep for a while. Both of them fall out and snuggle into my bed, between layers of comforters that don’t have duvet covers. Perhaps they’re lost forever. No, I find them wriggling around near my hip.

I put them back into my ears. It’s still the same song, again in the middle. I change the album to The Art of Fugue, composed by Bach, performed by Angela Hewitt. I had to buy this album specifically; it doesn’t stream otherwise. I turn it up by spinning the crown on my Apple Watch. There’s a setting that crossfades the songs, so I’m never sure when one ends and another begins, except for the sound of Angela’s piano tripping momentarily over itself.

My Apple Watch is at 35 percent. There’s an update for it. The update will install automatically if the phone’s nearby, and the Apple Watch is connected to a charger, and the download has finished. It must be daytime in Cupertino or the update will not complete. There’s a woman who works in Cupertino who must’ve finished her coffee or the update will not complete. She drinks it slowly, savoring it. The update is the third one this week. It didn’t complete last night as no conditions were met.

In the mornings I turn my head in the shower so that my ears are clean and the AirPods don’t get covered in amber-colored earwax. The AirPods aren’t waterproof and I have to shower without them. They’re not sweatproof. I don’t exercise wearing them. I don’t exercise enough, period. I think of the show Vida, on my AppleTV+ channel, where a girl jogs around Los Angeles wearing them. She sweats. Despite this her AirPods never seem to break on her. Her playlist is upbeat. When it merely rains—even a little—I take my AirPods out, secrete them into my engraved case, and zip them into my backpack. It has been raining on and off for two weeks.

There are Pro versions of the AirPods now, with noise cancelling and individualized sound. I wonder about my individual sound profile. I mean, my hearing profile, which is probably bad, full of jagged peaks and worrisome valleys. Angela Hewitt plays on, oblivious, her piano un-personalized for me. My ear itches. I rub it, and the music stops. Siri comes online, beeping once. My watch displays a spectrometer as she listens for instructions. I stop rubbing my ear, saying nothing. Siri vanishes and the piano music resumes with a second loud beep.

If I could sell them I could afford the Pro version, but there’s still the problem of my engraved name. Whoever buys them will look like a thief. On top of that, the batteries are wearing out. I can take them in to the Apple Store. An article suggested I use the words “battery replacement” at the store. This saves considerable money, and it only takes 45 minutes, plus driving time to the store, which is inside a shopping mall, next to Wet Seal, in another state. I imagine telling the Genius at the Store that I want ones which don’t beep or summon Siri when I scratch my ear. His name is Ethan. Instead of listening, Ethan’s jamming my chip card into the bottom of his iPad. I was able to sign up in advance by entering my credentials on the Apple Store site, plus my security code, which appeared on my iPhone after I held my iPhone inches from my face, unlocking it. Someone is trying to use my AppleID in Hoboken, New Jersey. I’ve never been there. I confirm that this is legitimate, all so I can go back to Apple’s website and enter my code, which I’ve memorized. I have a photographic memory for security codes. 665743. 4w3xj. 17832. Recently they seem to follow a menacing pattern. In order to forget them I have to drink whiskey, rum, or NyQuil. I’ve no idea how The Art of Fugue ends.

I switch to my iPad so I can watch The Morning Show. The AirPods have an updated chip and do this easily, with six beeps and another tone, a digital thrum, as if GarageBand is clearing its throat over and over again. My iPad adjusts automatically to the dim light in our bedroom. This saves the battery. I can hardly make out what’s happening on the screen, and turn away, pouring the second dose of NyQuil directly into a glassful of rum as I visualize all the Golden Globe nominations each actor has received. The show stops for no reason, saving my place. I tell Siri to resume playback. She begins playing The Art of Fugue, as performed by Angela Hewitt, from the beginning, after a beep. I get a call from a telemarketer, who’s concerned that the warranty on my vehicle is expiring. We talk hands-free. When I offer to sell the telemarketer my AirPods, he hesitates, then asks if my charging case is personalized. I’m cordial with him—jolly, almost—but I refuse to give him a straight answer. Our call ends. The night deepens. It’s almost two a.m. My watch activates Siri. The music stops.

I’m sorry, Siri says, after a little while. I didn’t get that. I beep in response. I’m having trouble connecting right now, Siri tells me. Try again in a minute. Beep, I whisper. My watch advises me to stand up, to breathe for one minute, and to sleep, simultaneously. It vibrates my wrist. I’m shaking slightly. I need to recharge, I think to myself. I reach for my iPhone, knocking over the glass of rum. Amber fluid seeps between the braided wires on my bedroom floor that connect to the wireless charging pad. I’m at 35 percent. My batteries are wearing out. It’s only a matter of time.