Returning to video games after a few years away can be a shock to the system. 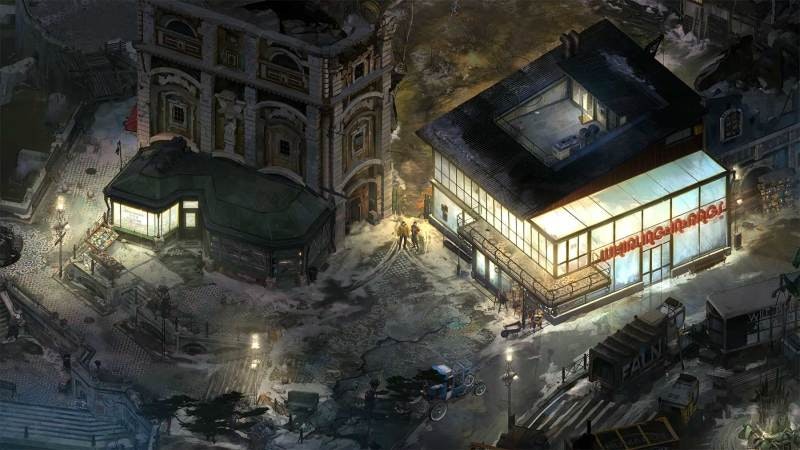 As I get older, computer games are a lot like marijuana—both get more and more cartoonishly, futuristically powerful, and when I return to them expecting a manageable buzz and a brief escape from reality, I'm hurled into an overwhelming psychedelic fugue state that I can't leave for six or seven hours at a time.

I dropped $40 on ZA/UM Studio's Disco Elysium in December, not having played an A-list modern video game in years. It’d be easy to get swallowed up and go crazy. I was down and out and seasonally-affective, in need of a break from reality, and had been captivated by its Internet buzz for months. You control an alcoholic detective with amnesia as he tries to solve a murder in a dilapidated, magical realist city. His psychology is decided by a grid of 24 character points, where you’re able to tweak his street smarts, flair for drama, empathy for other cops, penchant for surrealist free association, and more. The setting appeared darkly hilarious and weird, in a bombed-out, post-communist ghetto on what looked like an island in France. It seemed like a worthy way to waste my time.

I launched the game and was promptly swallowed, spending a week's worth of nights clicking through its story till the sun came up. But by the end I left with a clean conscience. What I’d worried might be a dangerous concession to my neckbeard tendencies was actually life-affirming: an enriching, cathartic Art Experience, one that widened my sense of humanity. I returned to physical reality inspired, and a little bit transformed.

I'm not the only one—Disco Elysium won a lot of awards and has a Metacritic rating of "universal acclaim." Countless think pieces have been published since its release—some painfully vulnerable tales of mid-life crises, some thoughtful analyses of its politics, some explorations of its addictive, Twitteresque dialogue system. When Time put it into its Top 10 Games of the Decade, it was called it "a game that highlights how all video games are art."

In the past, I'd side with Joe Biden, who said game developers were "little creeps" whose games "teach you how to kill." But Elysium is in a class of its own, like no game I’ve ever played, and it has inevitably changed the Games-as-Art conversation.

In an interview with Games Radar, co-founder and lead writer Robert Kurvitz describes his commitment to Elysium as a last resort. Kurvitz founded ZA/UM as a punkish arts collective while "living in total squalor and poverty" in 2005 Estonia. He and his fellows were playing in bands, painting, and creating steampunk spin-offs of Dungeons and Dragons—far from the usual techie origin stories of the billion-dollar industry.

Kurvitz had self-published a novel in the same world as Elysium in 2013 (Sacred and Terrible Air, soon to be translated), and his high hopes for the novel were dashed upon its release. He sold 1000 copies. "So after that I succumbed to a deep alcoholism," Kurvitz says. A friend and fellow novelist rescued him with the game idea after talking to his kids. "Stop writing books! No one reads books!" the kids said. "You should make a video game."

Kurvitz air-lifted his world out of prose and into the cloud, pitching "Dungeons and Dragons meets a 70s cop show," and convinced his friend to sell his vintage car to fund the fledgling months of development. The change of media proved wise—Elysium is able to accomplish things in writing that have so far been impossible. Among its many innovations, the game makes its character points become actual characters, with dialogue coming from each aspect of your personality—characters like "drama," "rhetoric," "volition" and "savoir faire," all competing for more authority in your psyche, each with its own distinct voice. In an especially memorable section, you and your partner are interrogating a femme fatale with a clear connection to the murder. As the conversation continues, you slowly realize she has seduced you into taking her side, and your logic and empathy betray you, doing everything they can to convince you to let her go free. The shape of the conversation, and the fate of the woman, depend on the choices you've already made. It's fascinating, and doesn't seem possible on anything besides a computer.

As professional writing slowly becomes a farm league of potential Netflix IP, it's worth considering how Millennial economics will attract more and more talent to the game industry. It's an exciting thought. When I was a teenager—smoking mid-grade weed, playing clunky games with aughts-era graphics—I’d sometimes get this awestruck sense that games were an Art of the Future, jacked up on the Wagnerian vision of a totalizing, all-encompassing opera of light and sound. The actual attempts were ultimately disappointing—Final Fantasy VII, a fixture on all-time greatest games lists, has dialogue so cheesy and half-assed that it would cause a moviegoer to walk out of the theater, or a reader to abandon a book. But with Elysium there’d a change of guard. It feels like walking around a breathing, psychologically-responsive novel, one built of gorgeous impressionist landscapes, with incisive sociological commentary and a soundtrack by British Sea Power. The promise of an interactive art that embraces painting, literature, and music all at once is starting to be realized.

ZA/UM has been generous in sharing their influences. Kurvitz and his writers cite Emile Zola's 1885 masterpiece Germinal as an inspiration, a novel about a rioting group of French coal miners, which shines through in Elysium's shadowy intrigue of labor disputes and constant, witty cut-ups of socialism. They also recommend the work of Soviet science fiction authors Arkady and Boris Strugatsky, and their visions of an elaborate communist utopia called NoonWorld.

Art director Aleksander Rostov says he was influenced by Rembrandt, Ilya Repin, and contemporary British artist Jenny Saville. On the studio's Twitter feed I saw some beautiful landscapes by Russian painter Stepan Feodorovich Kolesnikov. Digging through their internet trails, I felt like I was watching an old-fashioned art movement begin—informed by salons of squalor and poverty, with Baltic levels of passion and pathos and highbrow European taste. In a computer game! One where you can punch a 12-year-old meth head in the face, or wear boots you stole from a rotting corpse while you sing karaoke, or riddle your way to an understanding of neoliberal economics so thorough that you earn a single dollar every time you convince someone else of the worth of the free market. It's bizarre and heartwarming.

In an interview with the Escapist, Kurvitz says ZA/UM plans to release a "manifesto" describing their "cultural ethos" in 2020. He calls the collective "less a studio and more a cultural movement in the vein of Dadaism or Fluxus... just using video games as their medium rather than theater or painting."