The Impenetrable World of Die Antwoord

And how to penetrate it. Use protection. 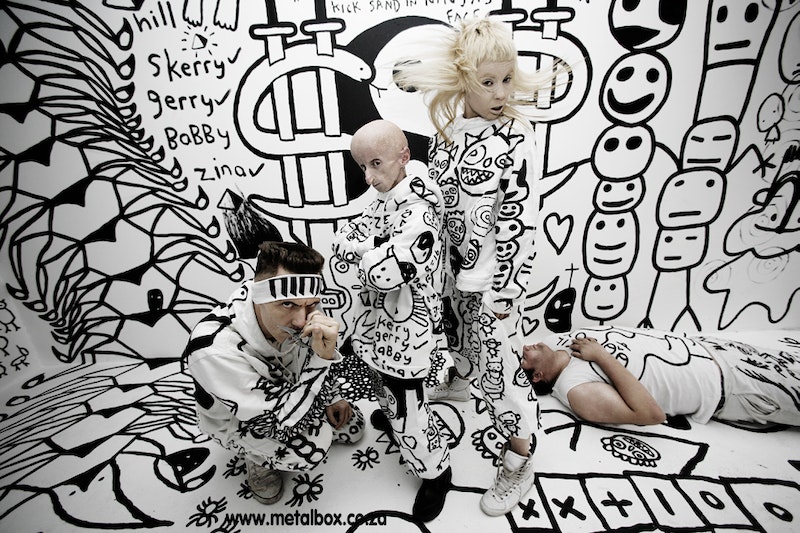 As we were trawling across YouTube for more of humanity’s dregs, my girlfriend and I stumbled across the mighty Tsimfuckis aka Chicken Little. If you’re not someone who hits the “random” button on Encyclopedia Dramatica while you’re bored during breakfast, Tsimfuckis is a teenaged sufferer of progeria (or something similar) who wastes his life being angry and acting like an online thug, which is hard to do when you sound like a methed-out Winnie the Pooh. He is not a TV-friendly case of overcoming suffering and disability to make the world a better place. This is what led me to the discovery of Die Antwoord.

Appropriately, the path to Die Antwoord was paved with discomfort and the saddest examples of the human condition. This seems to be the theme that Die Antwoord embraces, which is almost refreshing in the wake of most hip hop artists embracing gross excess so vocally. Much of Die Antwoord’s music references very specific aspects of South American culture—specifically, “Zef” culture, which draws upon intentionally outdated references and, in their own words, being trashy while feigning wealth. Die Antwoord shows all of the imperfections in this weird patina, creating a parody of the culture as them embrace it. It’s still unclear if they’re just kinda lucky and dumb, or so smart that they can profit from the appearance of dumb, like Tim & Eric. Either way, a well-placed Ren & Stimpy reference made them worth exploring in greater detail.

You can’t watch the videos for “Evil Boy” or “Enter the Ninja” without immediately being struck by their interest in being grotesque, with shades of Aphex Twin’s “Rubber Johnny,” Prodigy, and any number of Tool videos. It almost overwhelms the musical quality of the songs that have been put to video. Sure, their lyrics hover in the realm of Insane Clown Posse, and I’m pretty sure that they rhyme “fuck” with “fuck” at least once, but superficially, it’s all funny accents enhancing impressive beats. “Look in the mirror, you can see it’s you. You got two nice boobs and a penis too.”

Ninja breaks into his own song to declare just how great it is, which is a hip hop trope, but he somehow makes it seem even more stupid than usual.

They’re something like the Gwar of hip hop: Ninja is a lanky, angry creep with the contorted face of an old man and a refusal to put on anything more than boxers. Yo-Landi Vi$$er, the group’s female, raps in a higher pitch than mc chris and wears a whole lot of dead animals, and no eyebrows. It’s easy to be repelled by their trying-too-hard theatrics: phallic microphones, animatronic rat costumes, progeria people, and a whole segment in “Evil Boy” about fighting off a ritual circumcision, which appears to be rampantly homophobic if you don’t know the obscure cultural implications of what’s actually being discussed. Of course, it’s deeply political, but it’s undermined by a proliferation of wangs: hanging from the trees, off of hairy Muppets, flopping around on the singers, and being proudly grasped by bastardizations of Casper The Friendly Ghost.

I’m still not sure what they are, or if they’re even worth listening to, but I think that they can be best summarized in this conversation between Ninja and a videographer:

“What does [Die Antwoord] mean?”

“The answer to what?”