The Air Around Us, Sampled

Baltimore is host to this year's second-annual Megapolis, a festival of all things audio. 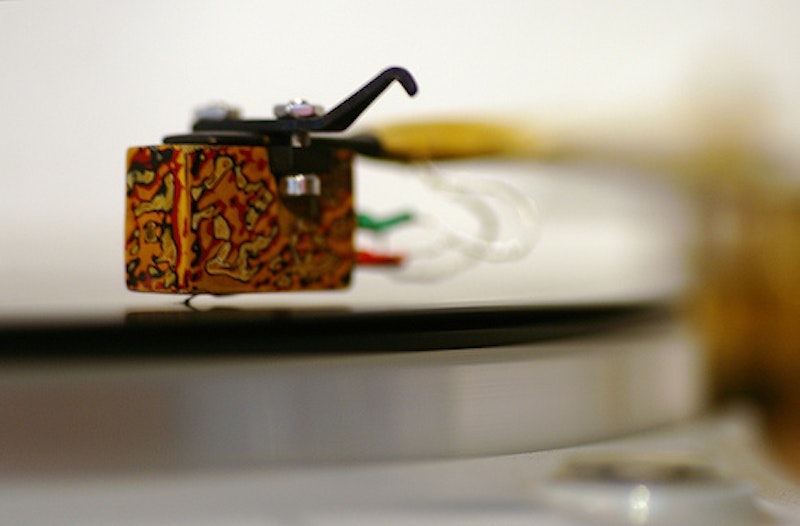 As the DJ's Wednesday performance at Baltimore’s Windup Space reached its coda, two conflicting conclusions surfaced: this is what gives sound art its incomprehensible name; and, this exemplifies sound art as a relevant and vigorous exercise.

By this point the DJ was breathing with his looped samples, as a violinist would breath in sync with the rest of the orchestra despite the lack of a technical requirement for such breathing. Sound art is expressive, I thought to myself, in as real a way as the output from any DJ, musician or performance artist. Except for the lack of a consistent rhythm, the DJ’s performance was identical to any normal DJ—at one point he was on his toes; shoulder cocked askew, his head straining. A swatch of choir music was cut out of its original context and looped at random throughout the performance—oceanic swells of harmony amid an LP hiss and electronic reverb.

The artist’s soundscape was trance-like, experimental in the basic sense that he manipulated audio—music, voice-overs, atmospheric pulses. In the absence of rhythm and a coherent melody yoiu're left to digest a raw mash-up of music's primal qualities—the beautiful, accidental interaction of disparate wavelengths that produces harmony, words and emotion.

So began the second annual iteration of Megapolis, a DIY/sound-art/geeks-and their-radios festival. Its name comes from the term used to describe the tightly interconnected Boston-DC corridor and similar metropolitan areas; Megapolis seeks to unite like-minded artists in an orgy of audiophilic experimentation. There are workshops for making your own surface mics, Atari Punk Consoles and transmitters; festival discussion topics include “The Cinema as a Concert Hall for the 21st Century,” “Oversharing on the Radio,” Practical Cognitive Processes for the Audio Maker,” “The Sounds of Sex” and “Three Algorithms: Strange Connections Between Logic, Disorientation, & Experimental Music.” The list of events is simply staggering.

Currently at the Windup Space are several excellent installations that interact with sound in real time. Bon Champion’s “::Matrix::” is a small wooden box with a pinhole camera on top. Attached on the outside are four sonar sensors, one mic and one humidity sensor. These feed into an 8X8 LED Matrix, which uses the sensory data to calibrate the amount of light let in through the camera; the light hits a piece of color photographic paper, and in two hours a photo is born. The images are colorful boxes on white backgrounds, with varying degrees of saturation and layering. All told, a few of them look like Mark Rothko works—near-terrifying swatches of color that, despite their small size, project into the space in front of them.

I recently exchanged emails with Megapolis Regional Director Katherine Gorman, whose day job is a producer for WYPR’s Maryland Morning with Sheilah Kast. Our lightly edited discussion is below:

Splice Today: In the “About” section of Megapolis's website, it reads:

The massive infrastructural integration and enormous size [of the Boston-Washington corridor] means there’s an unparalleled potential for collaboration and creative exploration. The Megapolis Festival examines the sonic landscape of this sprawling urban environment, showcasing artists and documentarians from all over the region, and focusing performances, workshops, and presentations around one particular mega-neighborhood

Can you talk a little about how this geographic theme unfolded?

Katherine Gorman: When Nick [van der Kolk, Artistic Director (Chicago IL)] and Justin [Grotelueschen, Managing Director (New York City)] came up with the festival they were both living in Boston I think. Then Nick moved to New York. As I understand it they were both excited by the idea of exploring the sonic landscape of such a vast space that is so fluidly connected and yet so varied.

I stepped into the festival with the theme already in place. For me it has been a set of boundaries to work within. People who work with audio are hyper aware of space. Each place creates it's own noise, has it's own chord structure. Usually I think about this in terms of small spaces like rooms. But the idea that this entire scab of development that stretches across the east coast has a similar and unifying sonic pattern is fascinating.

The reality of the theme really hit home for me last year while going to the fest. I took the train from Baltimore to Boston. I had a pretty rough couple of weeks and spent a lot of time on the train sleeping. I would wake up periodically, with no idea of where I was, would look out the window and things would look exactly the same as they did and hour ago.

The theme unfolds in lots of basic ways; who comes to the festival, where we'll hold it next, things like that. But I think its main purpose is to serve as an anchor, a jumping off point, an initial idea that we hand to people and ask them to explore.

ST: Is this the first event of its kind? Or are there any existing collaborative efforts in the Boston-Washington corridor?

KG: This is the second Megapolis. We held last year's in Boston. There are lots of collaborative projects in the BoshWash, many of which will be highlighted at Megapolis. As far as I know, we're the only audio festival who does what we do.

ST: Why was Baltimore chosen for this year's iteration?

KG: You'd have to ask Nick and Justin. They put out a call after Megapolis Boston asking radio producers and organizers to pitch their city. I was so excited after last year’s fest that I really wanted them to do it here. So I put on a song and dance and they picked Baltimore.

I felt like the Baltimore audio scene could really shine at a Megapolis and that we would really benefit from importing some artists who wouldn't come here otherwise. I thought Megapolis would be a way to build a stronger connection between Baltimore and the BoshWash. I think BoshWash needs to take notice of Baltimore and Baltimore should prick up their ears a little more and listen to the bigger community that we're a part of.

ST: What initially brought you into this community? Where do you see your work at WYPR fitting into the grand scheme of Megapolis?

KG: When I was little my mom would tell me these fabulous stories about growing up in Laos and being a teenager in Columbia to try to soothe me to sleep. My mom speaks Russian and Mandarin so her tone and cadence in English is a little unusual. I remember having a sudden realization that she sounded more like she was singing than talking. I got really interested in personal storytelling; it’s so powerful. You could literally bring someone inside your head if you did it correctly.

When I was in middle school I was introduced to “This American Life.” When I realized that there was a form, a way, to create stories out of sound and that people were doing it, that if you were lucky and you were good they might even pay you for it! I got involved in radio as fast as I could. I started working at my high school radio station and then interned at Michigan Radio in college. I truly believe that the best way to move someone, to make them care about something, to affect them emotionally, is to tell them a story well. Journalism and radio production at their cores are just an attempt to tell a story well to a large audience. Getting involved in the sound art and audio community has allowed me to experiment and learn new ways and more effective ways to tell stories.

I feel like my work as a radio producer fits right in at Megapolis. Every morning I sit down with 45 minutes or whatever of raw tape twist and break it into hopefully the most effective story it can be in five to seven minutes. It's taken a lot to lean how to do that. Studying music and storytelling and the work of other producers. I think of going to Megapolis as a training experience to hone my production/storytelling skills.

ST: What do you hope the average, curious visitor takes away from Megapolis (other than a sweet Punk Atari Sound Box)? Which is more important: representing the Greater BoshWash (wouldn't WashBo roll of the tongue better?) Corridor as a cohesive unit, or instilling in your visitors a greater sense of what audio technology and its devotees are capable of accomplishing?

KG: I hope the average Megapolizer takes away a broader idea of what sound can do, and that they can do it to!

ST: Where would you like to see Megapolis in 10 years, figuratively and geographically?

KG: Seriously, I have no idea. Public radio and sound artists are really at turning point with all the new options for distribution that the Internet provides. As well as all the twists to the medium that it allows for. I have no idea where Megapolis will be in 10 years. I have no idea where it will be in one year. But there has been talk of taking over an abandoned mall in CT. We'll have to see how that goes.

Actually, you know what, right where it is. I hope that in 10 years Megapolis is back in Baltimore (because we deserve it) and using sound to bring people together to share things they've made and to teach others to make them. The need for that will never change.