Shit [ ] Say and the Growing Diversity of Internet Audiences 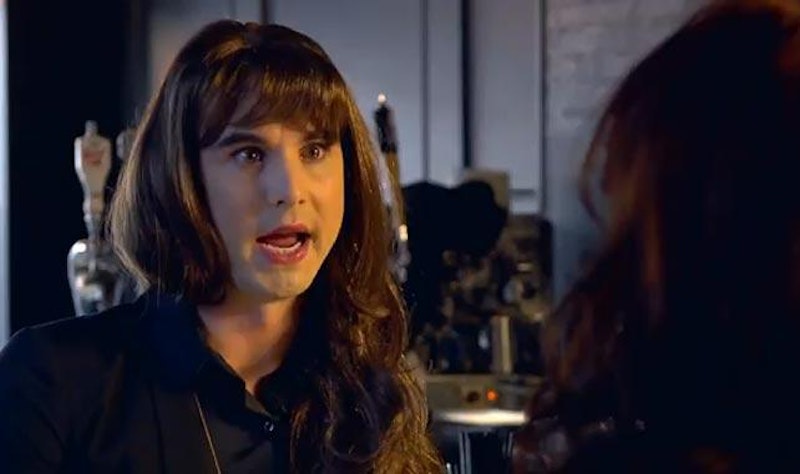 It began, as Internet viral phenomena often do, with casual sexism. The depressingly popular micro blog series "Shit Girls Say" had become a runaway YouTube hit, somehow with the participation of the ordinarily selective Juliette Lewis. Taking some of the superficial trappings of drag theater and distilling them to pure gender slapstick without any mitigating context and more than a hint of condescension, the initial video struck a chord. A dumb and very dudely chord, and as always the creators and biggest fans of the video insisted it was all in good fun and no harm was intended.

So while those who took offense to this sort of exercise, in which various common and banal phrases are spoken by two female characters (one portrayed by co-creator Graydon Sheppard and the other by Lewis) presumably for comic effect, prepared for the usual "you're too sensitive" comments whenever this sort of thing is criticized, the videos continued. Not the original ones, of course. There was a second installment that replicated the same format of the first video and was similarly well received by its intended audience. And then a decidedly "artsier" third part, with the heaviest participation of Lewis thus far and a script that relied heavily on repeated phrasing with varied inflection and concurrent, layered dialogue. Seriously. For obvious reasons, the intended audience was much colder to this attempt at keeping the series alive.

But it mattered little, as numerous clips "inspired" by the series had taken off and reached viral levels on their own. With popular taste too discriminating for a mere rehash of the milquetoast sexism characterizing "Shit Girls Say," the newer videos capitalized on casual racism, homophobia, and classism. Sexism was still often part of the package, and in general the videos promoted some simplified idea of how historically marginalized groups conduct themselves in social situations as viewed through a privileged lens. That many of them (like the original) were made with the participation of members of those marginalized groups is likely more of a symptom of internalized oppression than an indication that these videos are in fact laughing "with" the subject and not "at" the subject.

So the onslaught of "Shit [   ] Say" videos has continued, only recently tapering off. "Shit Black Girls Say," "Shit Gay Guys Say," "Shit Rednecks Say," and "Shit Asian Dads Say”—and dozens more—all debuted to enthusiastic reception and automatic viral status. Not everyone was into them of course, and the "you're too sensitive," "it's just a joke," and "lighten up" comments were immediately made to silence any concerns someone might bring up about entire groups of people being ridiculed and reduced to stereotypes.

Some of them weren't even offensive, just boring and specific to various niche audiences that might find them funny. "Shit New Yorkers Say," "Shit Skiers Say," and "Shit Med Students Say" were predictably mundane enough to be forwarded by people who would ordinarily avoid passing on anything with profanity in the title. By then, the phenomenon had been covered by mainstream media (albeit with the usual asterisks and bleeping to obscure the offending word) and had reached just about anyone who had been online even just a few times to check e-mail since late 2011.

At some point during the height of all this Shit-Saying some new voices emerged, interspersed with the usual majority-rules viewpoints. Suddenly there was "Shit White Girls Say to Black Girls," produced by a black woman wearing a blonde wig. While gender was again part of the joke, the primary focus was on how stupid and clueless a person of privilege can appear to someone from a marginalized group. Where were all the "It's just a joke" people then? Most of them didn't bother to watch this one or didn't get it because for once they were not part of the intended audience. And some of those who did see it got angry and cried "reverse racism" or something similarly meaningless. But now it was open season, and a number of videos with titles like "Shit White Guys Say to Asian Girls," "Shit Straight Girls Say to Lesbians," and even advocacy-minded shorts like "Shit Everybody Says to Rape Victims" were coming up in the same searches.

Like any Internet fad, context is important but can also rapidly change depending on what's being shared and who's doing the sharing. So of course the majority of these videos appealed to dominant (white, straight, male) sensibilities and there was nothing approaching a "takeover" of the theme, which is on its last legs after about three months (roughly 10 years in Internet time) anyway.

But the marginalized voices eventually came through loud and clear, perhaps in a show of collective frustration being backed into a corner. Once again being ridiculed and expected to grin through the insults. Many of these people had similar ideas about this display of over-simplification and categorization-as-humor, that those who had been cheerfully dehumanizing others for their own amusement could themselves be subject to the same sort of satirical generalizations. There could even be a purpose beyond the disposable entertainment most Internet fads provide. As is evident in the mass protests and uprisings throughout the world, the Internet has become increasingly useful as a forum for the marginalized, the silenced, and the underestimated. They may still be in the minority and limited in terms of reach and influence, but the voices have spoken up and are likely to grow stronger as traditional power structures continue to change with the advent of more widespread access to technology.