My Very Own Catfish 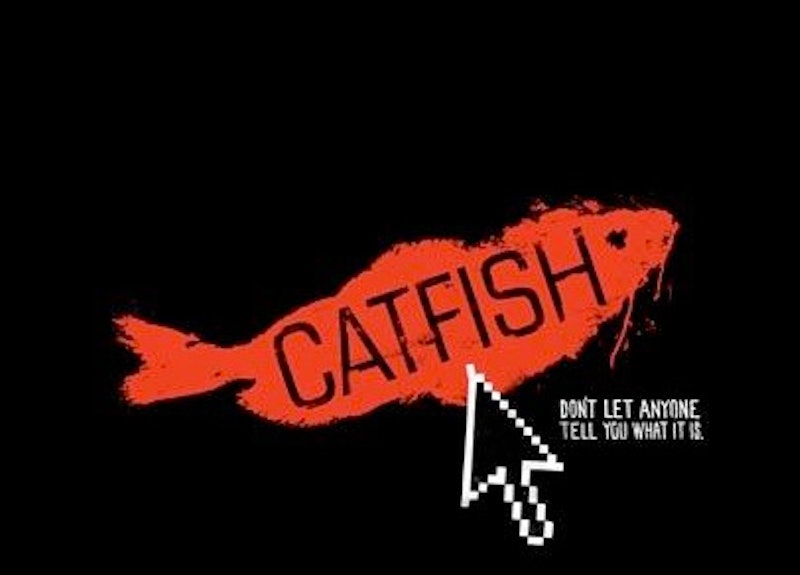 I saw Catfish this weekend, but in my very own, personal way, I’d already seen it seven or eight years ago. Spoilers to follow, as they say, so proceed with caution.

Catfish is a documentary that purports to follow the relationship of Yaniv Schulman with someone he’d met online, apparently through a series of apparent messages. Over phone and computer, a certain intimacy is formed between the two, sight unseen, and when Yaniv’s intense relationship with this beautiful girl starts to feel a little strange and the details of her actuality start to fall apart, he and his two-person film crew pay her a visit.

A few moments after arriving at an unfamiliar woman’s front door, the truth is revealed. One sad woman had elaborately fabricated a cast of nearly 20 Internet characters in a weird attempt to escape her mundane and frustrating life. In reality, she is married and taking care of two severely disabled sons, living in the middle of nowhere, and having given up her dreams of dancing and adventure many years past. The only coincidence involved in this entire situation was the fact that this woman found one of Yaniv’s photographs in the paper and decided to prey upon him for eight months—subsequently falling in love with him and unable to wrest herself from her fantasy and her addiction to the duplicity.

It’s a sad story from all angles, and the idea that any of it has been falsified, as many wish to believe, never really entered my mind. The parallels between this and an experience I’d had are similar. While it might seem far too coincidental that they’d have begun to document this series of events, you need to think like a documentarian: any footage, any event, any person captured and edited interestingly is a profitable endeavor, and digital film is practically free. What began as an attempt to explore the life of an eight-year old girl’s paintings simply evolved into something else. Smart editing crafted a very linear narrative and solid conclusion. While the trailers pushed the idea that it was a Blair Witch-style thriller, it was quite the opposite, which I think frustrated and alienated a large part of the audience.

When I was just out of college, I returned home to help take care of my family. Anyone who spends any amount of time with their family knows that these circumstances quickly turned into a desperate need to get out and never look back. Like anyone else, I had profiles on a few of the proto-Facebook websites that I could use for networking and keeping in touch with college friends. It wasn’t too long before a beautiful girl from Texas contacted me.

It’s an asphyxiating mix of sadness, hopelessness, romanticism and loneliness which can make you believe just about anything—even the most outlandish, remote possibility of making things better. I was exceptionally gullible when it came to the promise that this girl knew people who I could sell my art to and make a real living, but my judgment was even worse when it came to lofty ideas about romance. I’d have to move to Texas for any of this to coalesce. This was okay, because she had a big house due to some kind of medical settlement.

We spent hours on the phone, I sent her a painting or two in the interest of marketing them to her own network. Her friends took it upon themselves to make contact with me, and I talked to a few of them as well. You can only hang onto a fleeting hope for so long, and I’d always noticed the inconsistencies in her stories—going to a nonexistent mortuary school in Beaumont, Texas and only providing photos with unusual cropping and unnecessary editing.

Money never materializing, despite her claims of wealth. Weird, tearful phone calls late at night. Other innumerable, elaborate details that might make up a normal life. A nickname, “Starr McKaye,” instead of “Brittany Trahan,” which was the key that made everything fall apart and allowed me to take my life back, and admit to myself that the quantity of inconsistencies was too great to swallow anymore. I could stop waiting for something magical to happen.

As I was disengaging from the entire debacle, I still hadn’t found out the truth. I knew that little of what she had said was true, and there was still no true face to put to the words. I posted details in my personal blog, because this “Brittany Trahan” from Beaumont, Texas was practically unsearchable. At least if I provided something for Google to latch onto, other people might be just as suspicious as I was, and maybe my post could rescue them from the same disappointment and embarrassment I’d been through. It was less than a month later that I was contacted by two other people who’d been taken in by the same needy sociopath. One of them decided to turn her methods back around at her, and while I don’t know the fate of those interactions, he managed to obtain a real picture of “Brittany.” Brittany, as it turns out, was her real name, and it became obvious why she would construct an elaborate fantasy life or herself.

At the computer sat a clinically obese woman. The photo was grainy and pixilated, but the filth of the tiny room she sat in was apparent. She was the exact opposite of the images she’d been sending, which were culled from a random online profile she’d been monitoring. She was not this glamorous and confident person she pretended to be. She’d been putting on a performance, pitching up her voice and gently twisting hope out of people, aided by the illusion of a classically beautiful face. What was left after the mess was an uncomfortable mix of anger and sadness, a heightened sense of distrust for others, and a more serious trust of my own suspicions. This is what audiences seem to be leaving Catfish with, but without the personal loss of being tangled in the situation.

I didn’t need to see the movie to know what was going to happen. I understood the signs and incongruities within the first 15 minutes of the film, and it felt like a flashback. Being taken in by an online fraud is a very embarrassing experience. I’m not sure if I ever admitted it to friends, aside from a generic “That bitch was crazy” statement, which is essentially true.

Yaniv Schulman and his friends have done what I wish I could have done years ago, making the world aware that this is a real thing that happens, and it happens to astute people who just have an unnatural attraction to hope and adventure.