Creepypasta: From the Files of the /B/tards 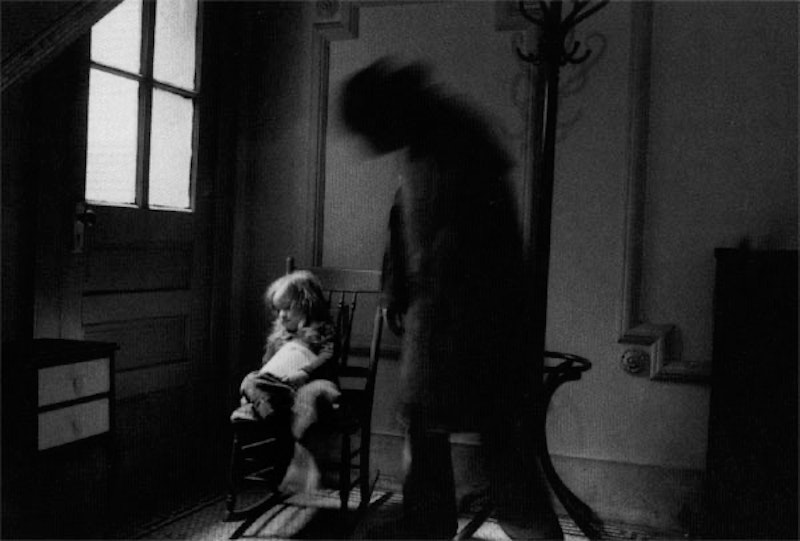 Sometimes I like to read creepy shit late at night, sitting in bed with a laptop lighting the room. I live in an old, allegedly Arts and Crafts house in Iowa City and my bed faces a pair of glass French doors. Some past tenant pasted opaque paper over these doors, leaving just the lowest two small, rectangular panels transparent. As it gets later and darker I switch back and forth between reading and frantically whipping my laptop around so its light shines on the transparent panels.

One day I expect to see a face pressed there, staring at me vulnerable and unaware in my bed, some horrible chewing dead-white face belonging to something with an even more horrible body and horrible grasping limbs. The doors don’t lock, of course. And I can’t quite see the panels without lifting myself onto my elbows. Having to move somehow means having to take the spectral intruder more seriously.

This is actually fun, kind of like riding a rollercoaster. I don’t experience all that much terror in my daily life (bicycling in traffic sometimes comes close) so it’s at least novel to work myself into an adrenalin-soaked, sweaty frenzy that prevents me from sleeping until the sun comes up. This requires a certain play between realism and fantasy, not quite a suspension of disbelief (I don’t really expect to be eaten by a ghoul), but something a little more visceral than just reading a horror novel.

And so far the supernatural threats have stayed in the realm of fantasy. I’ve avoided being bitten, clawed, swallowed or otherwise molested, though last week a housemate who lives upstairs inexplicably began stomping on the floor at 3:30 in the morning, supposedly to punish me for using an air-conditioner—this had been removed from its window days ago. Spooky! Also, not a healthy way to communicate. And, given my nocturnal predilections, extra-terrifying. In horror stories mysterious thumping rarely portends anything pleasant.

Anyway, I’m able to work myself into this perversely pleasing state of terror by reading decent horror fiction (most recently Hodgson’s The Boats of the Glen Carrig), but if I really need maximum terror I turn to the Internet, and specifically to a weird vernacular genre of horror story called “creepypasta.” Creepypasta came out of  “/x/”, an anonymous message board related to the notorious “/b/”, about which I do not feel competent to comment. Creepypasta’s name refers to “copypasta,” copy-and-pasted quips or stories that the “/b/tards” swap with one another online. Creepy copypasta became creepypasta, and creepypasta is scary as shit.

Creepypasta as a genre includes works of wildly varying style and quality. Some creepypastas take the form of conventional horror short stories (some purists contest their eligibility for the pasta label, since most copypasta is quite short). Others detail rituals, like the childhood favorite rite of summoning Bloody Mary (though usually bloodier and more elaborate). Some, and in my mind these most clearly characterize the genre, play with perception, psychology and physiology in very obvious ways—many of these boil down to an eerie introduction followed by “LOOK BEHIND YOU!” Here’s a typical example.

Creepypastas are mostly of about this quality—mildly scary, written with workmanlike, unmusical, improvisational coarseness. The plain words, the occasional grammatical or spelling error, and the short, flat sentences would destroy a novel or a literary short story. Who would want to read this kind of sophomoric, simple prose, a few notches above fan fiction but otherwise typical of the democratic writing environment of the Internet?

But there’s something powerful in these ugly, functional sentences, in the rawness with which they show their writer’s flaws. There’s an immediate honesty (certainly an ersatz honesty) in their lack of polish:

I’m hoping at least /x/ will enjoy this because it’s probablt [sic] fucked me up for life. It’s seeming a lot more absurd as time passes (12 days since I moved my shit into my friends place), so I want to get this out there and have people call bullshit and pass judgement [sic], because I think it’ll make me feel better.

I’ve moved out all my stuff, I’ve already called the cops, and informed my absentee landlord. I’ve done all the proper things, so there’s nothing left to do but share my little fucked up city living story…
It strikes me that their rough simplicity evokes a story told around a fire or in grotesque relief over a flashlight; there’s something childish about creepypasta, and it lets the reader be a little childish too. Take a look through the site’s extensive archives late at night and see for yourself. Even if some are ineffective or bad the stories get scarier and more powerful as you read more of them, thickening like layers of paint.

As if this weren’t weird enough /x/ has also spawned a few more focused experiments in collaborative Internet horror. The best of these is The SCP Foundation, a Wiki site that manages to be terrifying on occasion, and usually interesting. SCP is actually a Wiki (and is there anything more frightful than a Wiki?) that details the properties of a huge number of very strange and usually sinister objects (imaginary objects, natch). The site’s premise borrows heavily from the X-Files and, in general, the genre of supernatural conspiracies in which the government does horrible things to protect its citizens from even more horrible things.

Authors write SCP entries in the style of a dry official document, a constraint that often becomes irritating, especially given the community’s fondness for faux-sinister redactions and deletions—having a person’s weight given as [DATA EXPUNGED] is more annoying than mysterious. Sometimes the callous detachment works, and at least it keeps the sentences and words short enough that the writers usually don’t get into trouble.

These quibbles aside some of the SCP objects are awfully intriguing. Some, like the mysterious disc of SCP-093, tell interesting science fiction or horror stories; some combine images and text to create something horrifying, suggestive and mysterious (SCP-173, a fan favorite, does this well). Quite a few riff on House of Leaves’ atmosphere of sadness and terror as expressed through weird, physically impossible spaces (numbers 004, 087, 354, 432 and 700, among others—SCP writers love this trope). Others are juvenile and embarrassing, like reading about a complete stranger’s sexual fetishes. In fact, exactly like reading about a stranger’s sexual fetishes. There’s also a smattering of rather bad short fiction. It’s an open community, after all, and anyone can contribute, though apparently the site’s owners maintain a baroquely complicated system of admission and up/down voting.

There’s also an overarching plot involving various scientists and administrators who act as alter egos for the major players in the wiki’s community—every rose has its thorn, I suppose, and that goes double for collaborative internet roses. You don’t need to know any of this to read and enjoy the SCP entries, though.

Both SCP and creepypasta make for excellent late-night fare, ideally in a darkened room in an old house given to sudden, inexplicable noises. There’s something mentally and physically salubrious about periodic bursts of extreme fear, or at least that’s what I keep telling myself. Maybe I just dig reading weird shit that Internet nerds have written; but I promise you, if you’re willing to overlook the occasional grammatical error, read quickly past awkward characterization and implausible dialog, and ignore the trappings of Cheeto-stained Internet weirdness you’re in for a real treat. SCP and creepypasta sure ain’t literature, but what is, and who wants to read it anyway?