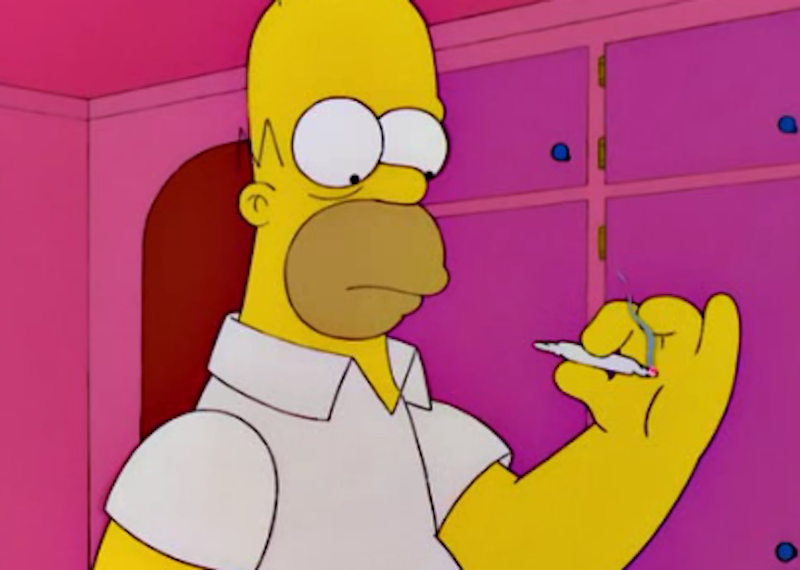 Twitter saves lives every day. People have died for Twitter. Lil’ birdy giveth, and the lil’ birdy taketh away. Imagine how Pharrell feels. His song “Happy”—a monument to man’s will—was indirectly related to the death of Courtney Sanford, who veered headlong into a tractor trailer as she was tweeting about how happy it made her feel. Clap along if you feel…

Last night in Baltimore, more flash floods and severe thunderstorm warnings. It was 4:30 in the afternoon, and the sky was concrete blue. Tuesday’s rains brought a double rainbow, catalogued online by everyone, easy likes, easy play. Half an hour before sunset, the city looked apocalyptic but pleasant, old Hollywood sepia, the sky a muted but intense orange, very Wizard of Oz. Schwarz said what we were all thinking: “WHY DOES THE SKY HAVE THIS FUCKED UP INSTAGRAM FILTER ON IT RN?” I was outside and took a picture (it really was a stunning rainbow), uploaded it to Instagram, and my friends and I lost our minds cackling as we scrolled through the feed, three dozen pictures in a row of the same rainbow from across the city. Another friend (acquaintance?) in another sphere suggested it was the CIA that turned the sky Amaro. Beautiful, marmalade skies until the sun set. No filter.

Everyone loves to be liked, taking pictures of the same rainbow because we know that’s a crowd pleaser, somewhere between adorable animals and graduation selfies. The different spheres of people I’ve met—close friends, family, “friends,” acquaintances, randos with mutual friend credibility, people from high school or touring that I’ll never see again—are spread out all over the world. A little like is a happy high; the neurological activity is basically the same as a bump of coke. The world I came into is driven by distraction and short happy highs, most that are monetized and government approved (junk food, TV, alcohol, pharmaceuticals), and illegal drugs, sold and consumed only by sick sub-humans who have never once thought of the children. The “Wild West” of the Internet is consolidated bit by bit every year—Facebook just gets more and more Orwellian and ominously two-faced, and Google can stream your dreams. Just because you’re paranoid, don’t mean they’re not after you.

Twitter remains the only major social media organ that isn’t an anesthetic. Things can happen that are (relatively) unexpected. Obviously, it comes in handy when you’re in the middle of a coup d’état, or held hostage in a bank, or locked in the trunk of a car (tied up, you can use your nose for touch features). It’s been crucial in tearing down what was left of the old guard, pre-9/11 media. Not just celebrities being pilloried for being -ist or -ic (though that’s fun, very Enquirer). It’s the closest we have to an unfiltered link between our stream of consciousness and global publishing. So it makes sense that Twitter breeds the most bizarre and interesting material to mull over while we wait to see what happens next. Stuff like Van Dyke Parks simply tweeting the letter “a” (lower case), people going on Ambien-induced rants in bed, Al Roker getting in petty fights and avenging every little shit that pushed him around the playground in elementary school.

Weird Twitter, though frustratingly circuitous and narrow in its obsessions and tropes (absurdity & existentialism through video games, cartoons, and bad sex jokes. And poop), is without peer out there. Prominent Weirdo Twitters like @dogboner, @fart, @wolfpupy, and @rare_basement are boring to me, just bad aspiring standup comedy. Probably because we know who they are and they’re candid about their personal lives and are often actually, yes, sincere. The truly brilliant ones—@dril, @KattWillFerrell, @rad_milk, and @BARTSIMSON_REAL (RIP: does any archive of this genius exist?)—are the poets of our time. No one knows who they are (though to be honest, some of them are probably run by the people mentioned above). Twitter is the only major social media unit that allows and thrives on people taking the piss out of it.

It’s the only medium where something like Marijuana Simpson could emerge. Last week, a mostly dormant account called @Homer_Marijuana started tweeting ceaselessly. The slug line—“What if Homer Simpson smoked weed? It’s not that crazy to imagine”—embraces and mocks the obsessions mentioned above, and sets the stage for one of the most accomplished and unique pieces of art to come from Twitter. For nearly a week, the account posted a screenplay bit by bit, in 5125 tweets, that was more Dostoevsky than Cheech & Chong. The entire text can be found here. Vladimir and Estragon from Waiting for Godot are some of the first to appear, followed by George W. Bush and Dick Cheney. Sonic the Hedgehog becomes involved, along with a fourth Simpson son, Ken. The script is an unedited epic that makes me smile from ear to ear. Bad weed jokes mixed with a pulpy grandiosity that sees Bart sent to Iraq, Mr. Burns adopting Nelson, Chief Wiggum stabbed in the back, Sonic selling drugs, and maybe best of all, Lenny, Carl, and Moe’s Greek Chorus commentary of the whole thing.

(MOE: There is a darkness over the Simpson household. LENNY: The father and the son have disappeared. CARL: We pray for their safe return.)

Marijuana Simpson is subversive, hilarious and intriguing because of the medium it was published in. If the script were released verbatim in print or elsewhere, it wouldn’t be half as interesting. Watching it play out online was what made it gripping, because mystery accounts like these tend to self-destruct, change course, or erase everything (see, sadly, the aforementioned @BARTSIMSON_REAL). This is the new serial, the teleplay of our time. Fuck House of Cards and fuck Orange is the New Black. Twitter artists like whoever wrote this are light years more interesting than transparent Empire holdovers, and the characters and scenarios they create, the worlds and images that @dril and @KattWillFerrell evoke, are far and away the most interesting and captivating material to come out of the social media explosion. It may still be steeped in cliched nerd culture, but it’s not easy hits of sunshine, and it’s not boring.