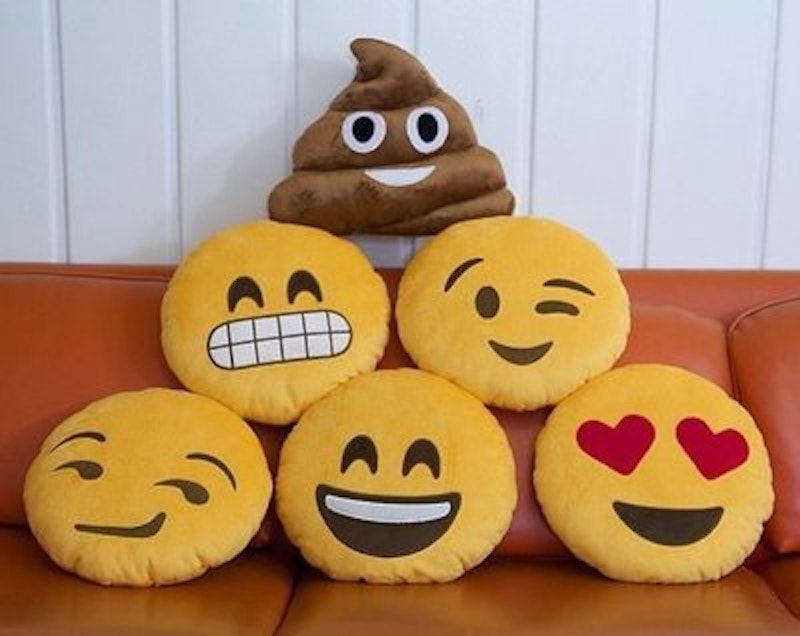 I blame the fact that I have teen/tween daughters and spend too much time on Instagram, but I’ll admit to my slight emoji addiction. It’s not a full-on, 12-step-program needed issue—I just think they’re fun. Soon I’ll be sick of them in a Candy Crush-level way, but for now I probably overuse and know far too much about them.

What’s an emoji, you say? Well, different from an emoticon which is made by using traditional keyboard symbols like “;)” for winking, the more elaborate emoji “alphabet” is used by installing an app that creates a series of symbols. Reminiscent of old-school Webdings and Wingdings Unicode font character sets and created by the Japanese, the word emoji literally means "picture" (e) + "character" (moji).

“Emoticons and emoji are changing the way we communicate faster than linguists can keep up with or lexicographers can regulate. ‘It's the wild west of the emoji era,’ said linguist Ben Zimmer... ‘People are making up the rules as they go. It’s completely organic.’”

Let’s face it, Americans. It’s organic and popular because we’re lazy. Why write “nice job” when we can text a “hands clapping” emoji? (Other than I can type words faster than I can scroll through hundreds of emoji to find the right one—I’m always lost in that “where is the chicken again?!” maze.)

While I was happy about the news we’d have new picto-choices like a beach with umbrella and skull and crossbones, I was overwhelmingly disappointed with the new list of 250. A vast majority of them are oddly outdated (three different floppy disks, six telephones, five envelopes, a tape cartridge and a pocket calculator?) I don’t mind the rolled-up newspaper, new lips and weather-related emoji, but how did the chipmunk get to be the only new animal? I want a crab, a lobster and a butterfly. How about a unicorn? Why weren’t we consulted?

The current set of emoji is riddled with annoyances, like the lack of orderly arrangement (the categories: bell, flower, car and expletive are bizarre and I’m constantly asking my kids where to find different things because it takes too long to scroll around looking for them). The food emoji suck (the change.org petition for a hot dog emoji didn’t work out), there is no bacon and only a lame new plate-fork-knife and hot pepper are on the culinary emoji horizon.

More importantly, the lack of diversity in Emoji launched an #EmojiEthnicityUpdate hashtag and fortunately, an entirely separate set of more colorful characters.

In fact, the only well-represented ethnicity in emoji are Japanese symbols because of their origin. There must be 50 symbols I don’t even recognize because they are Japanese-oriented. Apologies for my ethnocentricity as an American, but the 4th of July and other holiday emojis are dumb. It’s telling that their most substantial addition is the “flipping the bird” symbol that I guess they figured we’d use all the time. Well played, Japan.