Mac vs PC: The Eternal Debate

Is it just me or do our expensive-ass electronics wait to fail until exactly the wrong time? 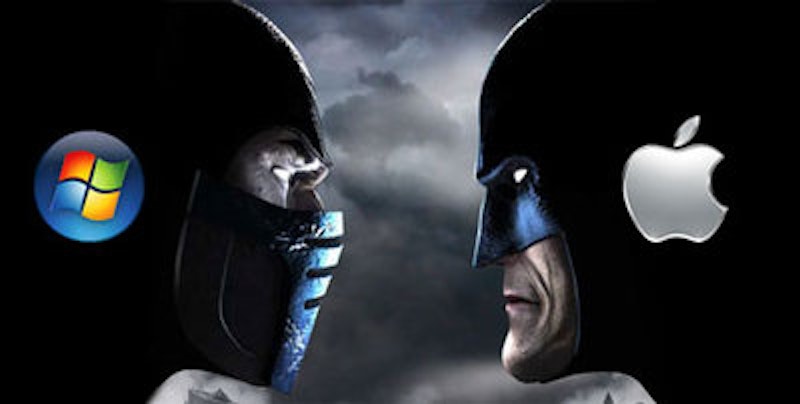 For the past month or so I’ve been suffering from some pretty ridiculous computer problems. Granted, it was my fault. I was sitting in a coffee shop, probably writing some dumb essay when I spilled like the tiniest droplet and I mean droplet of tea on my keyboard. I soaked it up as fast as I could not thinking it would make any difference because over the past several years my computer has had a lot of other stuff happen to it.

Anyway, I wipe up the liquid and continue to type as normal. Suddenly the keys don’t work. Suddenly everything sticks. Suddenly I’m getting the Spinning Wheel of Death. Seriously? I spill a drop of tea on the keyboard and it starts acting like this? Surely these things can handle more liquid than that. I’m positive there are plenty of guys out there who have accidentally cummed onto their keyboard because of pornography, which is what laptops are for anyway. I’m not one of those guys, just making a purely societal observation.

I take my machine to the Apple Store and a hot “Genius” tells me I just need a new keyboard, no big deal. Great. Then suddenly, the computer starts acting possessed and types random letters all by itself, 22 x’s in a row, which makes it hard for a writer when the computer has a mind of its own. Long story short: now I have to get a new computer and at the worst possible time.

Is it just me or do our expensive-ass electronics wait to fail until exactly the wrong time? Nothing ever goes wrong when you have enough money to get you through—oh no. Nothing fucks up until you need to make a cold decision: do I pay my rent this month or do I get a new computer?

I forget how expensive Macs are until I have to buy a new one. And every time I’m faced with the prospect of spending $1200 that I don’t really have on a computer I’m like, shit, let me just be cheap and get a PC and call it a day. For $599 you can buy a perfectly fine Windows machine. But as my violin teacher Mr. Williams used to tell us, “You buy cheap, you get cheap.”

So I roll over to the Microsoft Store at the local mall, which is, tragically, right across from the Apple Store. I fiddle around with some PCs and even found one I really liked. The price was cute, too. But then it came down to: “Well, it’s not a Mac, so…” I went to “Apple + Q” out of something and it didn’t work. Oh, weird. Then I tried to switch between programs using “Apple + Tab,” and that didn’t’ work either. Hmm? So then I ask the guy how do I do a “helicopter view” that will allow me to see all my open windows all at once and he does this super inelegant complicated thing that I don’t even remember.

The truth is I haven’t owned a PC since my first year of college. All through high school I worked on a Compaq machine because it’s what we could afford from the local Circuit City, and I’m sure it didn’t cost more than $400. When I got to college I met Jeff, my first boyfriend, and he was such a tech nerd and swore by everything Mac. I hadn’t used a Mac until I met him. I laughed, thought he was such a computer geek. But then one day he let me use his machine and I was all, “Oh.”

After using his computer I got sick of my tired-ass PC. I’d beg him to let me use his Mac for school projects, promising him limitless sexual favors in return. Eventually I saved up enough money to get my first Mac, and even back when I was a working college student it seemed like a lot of money. That purchase in 2002 was when I kissed goodbye to PCs.

I don’t have anything against PCs, and don’t use Macs because “they’re cool.” It’s that I’ve been using them for the past 12 years and don’t see myself switching systems just to save a few dollars. Do I hate buying a new Mac laptop every time? Yes. But Apple has me by my big black balls, and that’s probably the reason they have more money than the U.S. government.