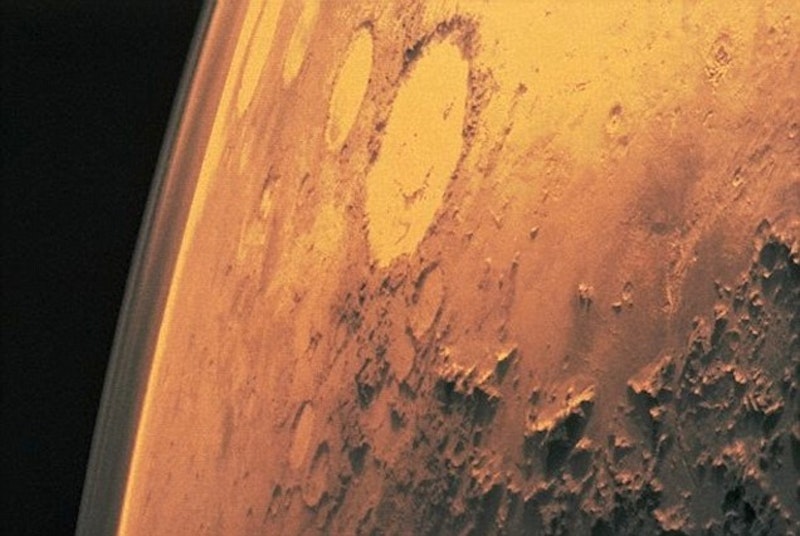 “This could be the most important discovery on Mars yet! This structure is 700' x 150', and is colored white with blue and red stripes against the red Martian soil. This is not a rock or mountain. It is a manufactured structure. This is not something that I created, this is something that is currently on Google Mars. NASA wont talk to me about it. I've sent them a few emails, and no reply. Go see for yourself. The coordinates are: 71 49'19.73"N 29 33'06.53"W.”

Mankind’s indomitable pioneering spirit endures.... as long as we don’t have to leave the house.

Google’s respectable mapping software has innumerable uses, typically relegated to finding out where the next multi-family tag sale is located or how to reach your cousin’s lamentable graduation party. Just the other day I was thrilled to discover a pair of intersecting roads in my own backwoods hometown, charmingly and inexplicably named “Enrico Drive” and “Fermi Court,” completely out of place with the imaginatively named “kind of tree” and “building” themed street names we’re generally surrounded by ‘round these parts. I have not, like David Martines, discovered an intergalactic weapons array. Then again, neither has he.

NASA refuses to answer his calls, but Martines is certain that he’s unwittingly stumbled across a very, very important structure on Mars, which cannot possibly be a bit of pixilated detritus floating through space, or a smidge of poorly interpolated data from a scanning hiccup, 48.6 million miles distant. The geometric lines that define this “structure” on Mars are, according to Martines, absolutely man-made and serve some kind of alternately benevolent or nefarious purpose, depending on your mood.

Here’s the thing: Martines is correct in his assertion that these are not natural forms. They are man-made—they just weren’t made on Mars. While the debate rages on, these shapes show very human hands creating data through an organization of pixels. The same phenomenon can be seen in the spreading, distinct fields that are created when the image is zoomed out, indicating finite, geometric areas of data collection. The striations are cause when a space is revisited at a different time under different lighting conditions, or with different equipment, or different parameters. This doesn’t make them farmlands from six-eyed cattle or alien landing strips. When it comes down to it, we’re a race of creatures that tends to think in terms of grids, and we understand grids are human phenomena, but we also produce them unconsciously because of this integration of geometry into our minds.

One of the best ways to support an argument is to actively attempt to disprove yourself, and attack your own logic from every angle, leaving nothing but a beleaguered, airtight premise. Martines is not a diplomat or a scientist. Indeed, the YouTube video that declares this discovery, which Martines, like a giga-nerd of infinite magnitude, dubs “Bio Station Alpha,” is an anomaly amongst his other videos entirely populated with shots of nature and him calling his guitar-playing dad “dude.” Anyone who’s ever seen the “Bart’s Comet” episode of The Simpsons has fostered dreams of accidentally finding something in the deep, dark recesses of space and placing a claim on it. Martines declares that no one should embed, display, or ask him to share his video. It’s his. All his. “Bio Station Alpha” is one breath away from being re-dubbed “Bio Station Martines, Hands Off! This Means You!” End of discussion.

This is not a Martian structure. One cannot make an actual, reality-shattering discovery when the discovery’s foundation is built upon a handful of obviously artifacted pixels displayed by a novelty program. It’s lazy, complacent, self-aggrandizing science at its very worst, and at its very best, it’s fun to laugh at. I’m a believer in extraterrestrial life, mostly because I’m not an egotistical isolationist, and I truly hope that we find something else like us out there before the end of my lifetime, but displays like this make us all look crazy.