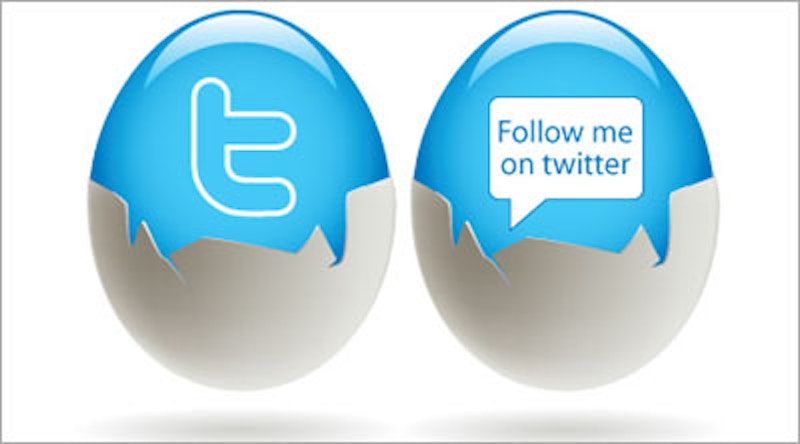 "[Twitter] is a cesspool, and, in my view, tawdry.  Necessary today, but still tawdry."  So said a veteran journalist in an email conversation with me last week.

And Twitter's a useful tool, at least for me. I post links to my writing, or to writing on my blog, and other folks re-tweet them and I get traffic and so my media empire grows. Occasionally others tweet things I am interested in and I re-tweet them to my followers and so I contribute to someone else's media empire, which is okay. Media empires can co-exist, as long as mine is the biggest.

Jonathan Chait recently wrote about the joys of Twitter on his blog, explaining that the great thing about tweeting is that it's all about choice. It's true that there are a lot of people out there tweeting about the weather or the state of their bowels or sports, and neither Chait nor I care about those things. But then you don't have to follow those people. Instead, I can follow writers I like tweeting about things I'm interested in, like politics (god help me) or comics (god help me twice.) It's all a wonderful smorgasbord of individuality and freedom. To not like Twitter is to not like America!

Which doesn't exactly refute my friend’s point about tawdriness. America, after all, land of the Wal-Mart, home of the U.S. Congress, is tawdry. America is bumptious boosterism; it's uplifting chautauqua harangues; it's carny spiel and bluster. America is, in short, the land of capitalism and the perpetual shill. And social media in general, and Twitter in particular, are its bastard, greasepaint-spattered offspring.

Twitter is designed as a tool of marketing communication. What I am promoting to my followers is my wonderful self; my brilliant writing, sparkling personality, and lovely links. And in return for letting me promote those things, I offer myself to be promoted to. Everybody gets to be their very own Madison Ave., their very own product, and their very own manipulated audience. Twitter isn't just a social media platform—it's the capitalist millennium.

And, of course, that millennium is tawdry, not because we have no choice in it, but precisely because we do. Advertising of the past was oppressive, and inescapable, but the very fact that it was oppressive gave you some distance from it. You didn't want to buy that beer or that car; you didn't want to hear about that breakfast cereal.  You were forced to by somebody else, and they sucked, and that was depressing, but it wasn't your fault.

Twitter is different. Twitter is your fault. That's part of what's so fascinating and enjoyable about it. You're not being marketed stupid beer you don't want. You're being marketed opinions and art that you like by people you hand-picked to market directly to you! And all that’s asked in return is that you be there, and, maybe, occasionally market yourself too. You slap their backs, they slap yours, and we all get positive reinforcement and clicks in a tawdry bacchanal of public intercourse. What exhilarating debasement, 140 characters at a time.