With the recent unveiling of the iPhone 3G, resistance to the Apple Empire is futile. 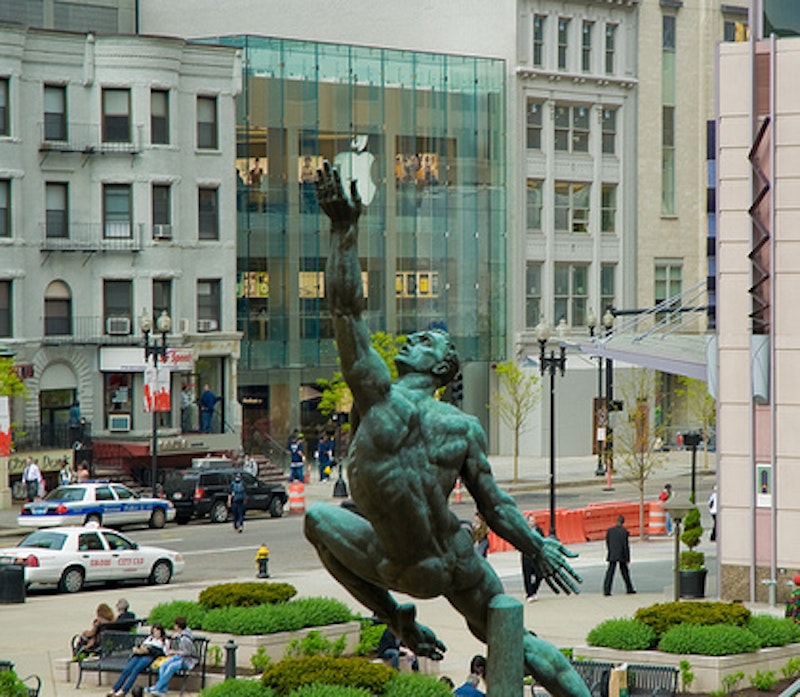 It was about this time last year that I had dinner with my friend, Alec. He’d been without a cell phone for a few weeks, and while he had given me the excuse that he had simply been too lazy to buy a new one, the truth was immediately clear when we sat down at the restaurant. Out of his pocket came the iPhone, and out of my mouth came a string of skeptical admonishments for him.

As a long time AT&T subscriber, the thought of purchasing the iPhone had crossed my mind, but I had read some reviews that panned some features, and perhaps more importantly, the $600 price tag was more than I was willing to pay for any cellular device. Even as I jokingly chided my friend for his splurge, there was undoubtedly a hint of jealousy at play whether I wanted to admit it or not. Like many, I had been intrigued by the unveiling of the iPhone after months of hype, and was amused by those who camped out for days to be among the first to get their hands on this new toy. Now the surprisingly attractive little machine was right in front of me.

While Alec didn’t wait in line to get his, when we met up that night it had only been a few weeks since the iPhone’s release, and he was certainly the first person I knew to have it, and it was the first chance I’d had to explore it. Trying out his phone, my skepticism and disciplined disinterest began to fade. The amazing clarity with which I could view a web page, the way the iPhone somehow knew if I was holding it vertically or horizontally and flipped its screen accordingly, the sheer beauty of the interface and the various graphics—all of these things wowed me, and by the end of our dinner, I was sold.

Still, I wouldn’t take the plunge. I just couldn’t get beyond the cost, and besides, my standard-issue flip phone worked perfectly well. But a week after my first encounter with the iPhone, though, nothing short of divine intervention took place. On an otherwise quiet Thursday at work, our boss emerged from his office with a box containing a shiny, new iPhone. To liven the day, he explained, we were going to raffle this iPhone off to anyone who wanted to enter. The cost of entry was $10, and with the phone priced at roughly $600, the number of entrants was limited to 60. My adrenaline was pumping and I couldn’t reach for my wallet fast enough. Within minutes, all 60 slots were taken. Each hopeful owner put his or her business card in a hat, and soon the drawing began. My boss drew 10 names, and then we took a half hour break. After over two torturous hours, I was in the final 10, and I just had a feeling it was going to be mine. Soon I was in the final two, my heart racing, and the next thing I knew, the iPhone was in my hand.

So as others were shelling out hundreds of dollars for their iPhone, I had spent only $10, and as an existing AT&T customer, the transition from my previous phone and plan was seamless. I didn’t get much work done for the rest of that day, exploring even more features on what was now my personal iPhone. The interruption wasn’t limited to just work either, as that weekend there were no fewer than five visits to the Apple Store on 5th Ave. in Manhattan. As a committed PC/Microsoft user, the Apple Store experience was new, and I was simply amazed. No matter what time of day I showed up, it was always packed, and the simplistic and logical brilliance of the way the store was run was very impressive. By Sunday night of that first weekend (and $200 of accessories later), I was hooked—not just on my iPhone, but on Apple in general. It just seemed like the phone’s operating system did things in a smarter, more logical way than any I’d encountered. Surely the same would be true of a Mac, I thought. I had always admired Apple and Mac products from afar, but had always assumed transitioning from a PC/Microsoft existence would be too complicated. The “helpful” associates at the Apple Store, however—which I was now frequenting every other day—convinced me otherwise and assuaged my concerns. It took only about two weeks before I bought a MacBook to properly accompany and fully utilize my iPhone. The transformation was complete, and in the space of less than a month, I had become Mr. Apple, closeted no more.

“Coming out” as an Apple man over this last year has been invigorating. Of course nothing is perfect, and I have my gripes with the iPhone and the MacBook, but overall I find both to be far superior to their competition. When I visit the Apple Store now, I feel like a member in a club rather than a curious visitor, and when traveling for work I find there is a kinship of sorts between me and the other travelers who pull out their iPhones or MacBooks in the airport or on a plane. I now laugh when watching the “I’m a Mac, I’m a PC” commercials—the same ones I used to find irritating. Naturally then, with the unveiling of the new “3G” iPhone over the last few days, I am watching the hoopla with interest. The idea of being able to have a faster version (annoyingly with a lower price tag) of my current iPhone is a very tempting proposition.

I haven’t yet given in to temptation. The sting of my iPhone envy has been greatly reduced by the release of the “iPhone 2.0” software, a series of changes to the previous version that give my “old” iPhone many of the advantages and new features offered in the “3G” phone. When I was finally able to download 2.0 late Friday night, I shouldn’t have been surprised when I then spent another several hours exploring the changes, much to the annoyance of my wife. Since that night, I’ve probably already shelled out $50 or so to download new “Apps” for the phone, justifying each purchase in some sort of manic frenzy of speedy evaluation and a not-unbiased weighing of pros and cons.

I know it’s going to be an uphill battle to ignore the reasons why I “need” the new iPhone. Hell, I’ve already laid the groundwork by convincing my wife that she needs to assume ownership of my current iPhone “if” I decide to pull the trigger on the 3G. This, I tell her, is for her benefit, an upgrade to her current flip phone and an obvious act of selflessness on my part. She sees right through my scheme, of course, and while she will protest if I do ultimately upgrade to the new one, there have been more than few times when I’ve caught her enjoying various features of my iPhone. This should come as no surprise though, because after all, one can only stay in the “iCloset” for so long. “Mr. and Mrs. Apple”…I like the sound of that.