Vandalism via emoji and mourning the early death of “Yay.” 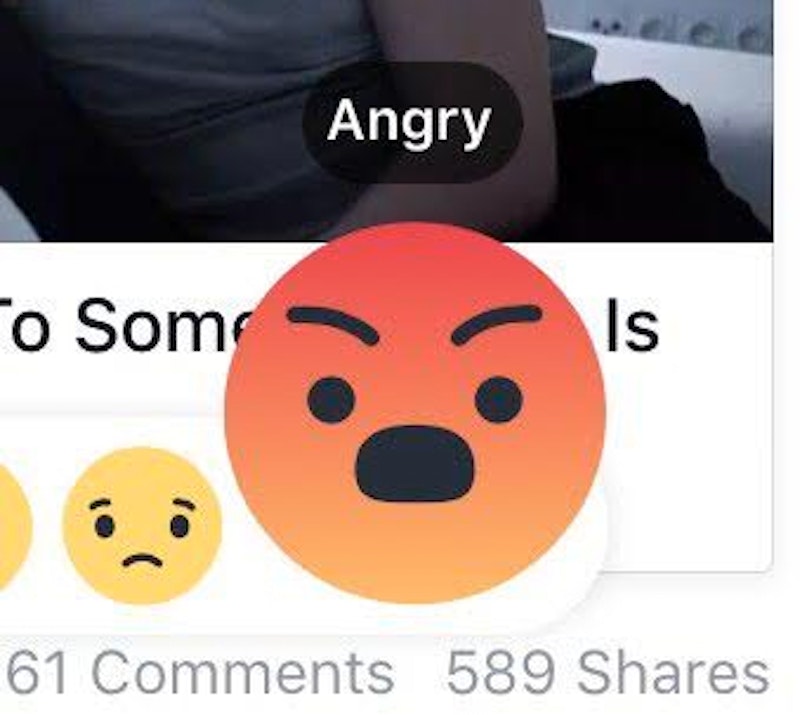 Nearly a month after Facebook expanded the long-time “Like” button into six emotional reactions—“Like,” “Love,” “Haha,” “Wow,” “Sad,” and “Angry”—people are still wary to wander off the comfy non-commitment of the Like. As this article in Wired points out, it’s a fairly restrictive emotional palette: users want sarcasm and irony, not variations on happiness. But I’m not happy because they nixed my favorite emotion: “Yay.” What focus group came in after the initial announcement and ruined my life by souring on Yay? In October, there was Yay. Now: no Yay! What the fuck? Angry! Angry! Sad…

Emotional vandalism is limited with only six options to choose from—passive aggressive jabs with the Sad or the Wow are possible, but the desire for a “Meh” button mentioned in the Wired article is silly because the most effective “Meh” is to not interact at all. Everyone that has a Facebook account knows the feeling of posting something and getting absolutely no response. It’s a drag. Makes you question things that you really shouldn’t be thinking about, like why isn’t the kid who ate glue in fourth grade all about my new profile picture, and where have all my friends from high school gone? Do they only see my shit when I post the trailer for Sausage Party? (Which, by the way, this movie is not what you think it is. Watch the trailer. Really disturbing. Violent!)

Anyway, back to Yay. In a follow-up article published last month, Wired included a bit of post-mortem on why Yay was axed. Dacher Keltner, a professor of social psychology at UC Berkley, was hired by Facebook as a consultant on the Reactions project: “Keltner himself says he was a major proponent of the celebratory emoji. ‘It’s such a good human reaction,’ he says. But yay also conveyed a handful of other positive emotions like ‘love’ or even ‘haha.’ ‘People actually ended up using that one less than all the other reactions,” Zhuo says. ‘It sort of felt like it didn’t quite stand on its own.’”

Wow. Sad. Really? COME ON. Dislike! Angry… I understand Facebook’s reticence in introducing a straight “Dislike” button, a common request for nearly a decade now. All nine years I’ve had a Facebook account, people have clamored for the Dislike button. But we can’t have that now because it would be triggering. Yes, really! What about all the kids who were bullied? Their prep school PTSD will flare right up and we’ll have brain-stained monitors from coast to coast with selfies collecting more Dislikes than Likes or Loves or Wows. I suppose you could tag the Haha onto someone’s glamour shot, but that just feels a little too Nelson Muntz. For now, my expression in limited in emojinal vandalism and subversion—I like leaving Love earnestly, and dropping a Wow here and there. There’s a comfort and ambiguity in the gesture of the Love and the Wow just like the Like. The Sad and the Angry are too on the nose—anybody trying to get subtle is pretty much limited to the Wow. I can’t believe more people haven’t abandoned the boring old Like altogether and embraced their emojinal options yet. They must be scared. Sad!