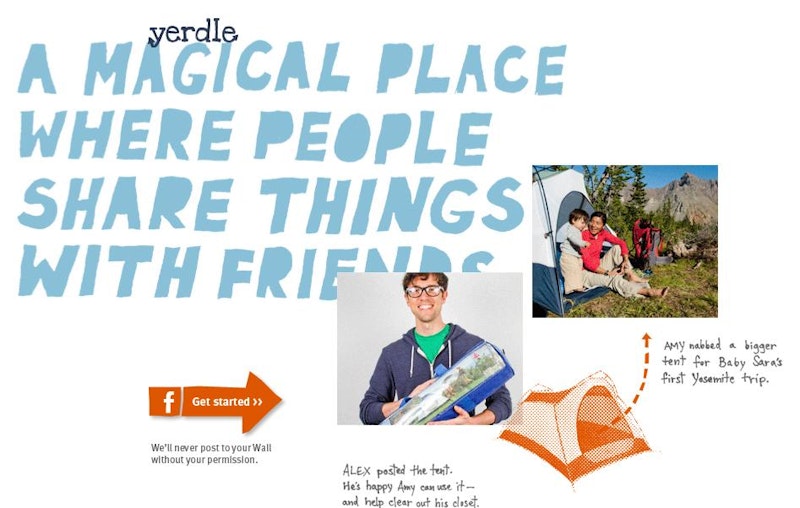 I recently wrote about how I maintain my poorly-funded shopping habit. Most of it is sifting through thrift stores and finding deals online. I try to find outlets that cater to my cheapness. Last week I discovered Yerdle, a recently developed online marketplace based entirely on a credits system, no money required. In order to accumulate credits the user posts their unwanted belongings for others to bid on. If someone wins or chooses “Get It Now,” they pay shipping and the item is sent with a prepaid label. Flat rate mailing costs are the only monetary involvement and they're only a few dollars. There’s an option to pick the item up, though you still have to invest in a means of transportation. Yerdle is as free as online shopping can get.

While Yerdle is an innovative app, it’s not a new idea. Fittingly, it's called a sharing economy and has proven to be a lucrative business model. Companies like Timbuktu and Patagonia have invested in Yerdle, offering their lightly used products. It's mutually beneficial because it adds quality name brands to the app's assortment and proves the durability of what they sell. The startup has big aspirations: co-founders Adam Werbach and Andy Ruben (former chief sustainability officer of Wal-Mart) hope to reduce overall waste and ensure that people get the most out of consumer products. It's true that not every American needs a new blender, especially when their neighbor has one sitting in the back of their closet. Though Yerdle is relatively new, with about 50,000 users: its effectiveness, enthusiasm, and attractiveness to young people will probably reap success in the future.

I’ve been using the app continuously. Not only do the items fall within my price range (free), it's fun. It feels good to get rid of excess stuff I no longer wear or use, and even better knowing that it's going to someone who wants it. For young, broke people, Yerdle could be a definitive treatment for compulsive shoppers. It's eBay without the guilt, the excitement of Craigslist's free section without the sketchiness. It could help build a community based on a sharing economy, especially if people choose to meet up and swap items. The idea of sharing instead of shopping could be difficult for some to get used to. Opening the box or removing tags tends to cost an unnecessarily inflated price. When someone compliments me on a piece of clothing, smiling and telling them I got it at Goodwill never gets old. I think Macklemore was on to something with that stupid song, though I'd much rather buy a cute pair of jeans than something that smells like R. Kelly's sheets.