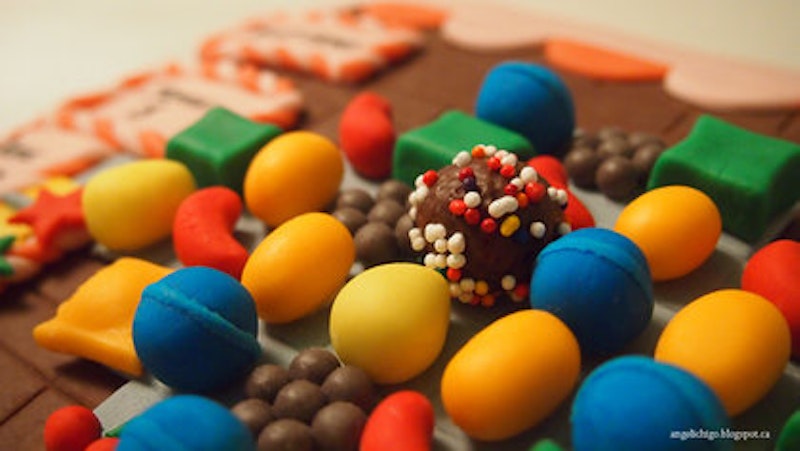 Once a gamer, always a gamer. From the lame graphics of the first video game in town, Atari’s Pong, to the mall arcade’s game rules of putting your quarter on the top of the machine to reserve the next round of Ms. Pac Man, I guess my Generation (X—ugh) is the first to experience electronic competition addiction.

I’ve written about my modern day game addiction with Song Pop, which I still play. I shared the embarrassment of being excited over receiving virtual valentines from pretend Internet people in Simpsons Tapped Out, which I don’t play anymore because I (dork alert!) finished the game. I still play Words With Friends with my brother and once in a while, still Angry Birds or Draw Something. The other day my daughter said "when you walk into a room and forget why you’re there, it’s because the person playing you in The Sims canceled your action." I cracked up; we both played the hell out of that game forever.

But holy Asteroids, I am telling you the latest game craze recently has me completely humiliated to be gulping the fruity-colors of the addictive Kool Aid app. For the first few months the “Candy Crush Saga” requests rolled in on Facebook, I deleted them, and eventually blocked the app as I do for most annoying game app requests (“Pirate Booty?” Really? What the Frogger, people? Seriously).

So I blame my friend (let’s call her Christine, to protect her identity) who is a newspaper editor at The Washington Post for what happened next. Absolutely unapologetically, she starts posting on Facebook different status updates about what level she’s on. This brilliant, funny, full-time career woman and mother has literally been brought to her knees by this game. So it made me curious. It must be a fun game, I reasoned, or she wouldn’t be playing it, and ditto the other normally-intelligent women on Facebook I’ve seen talking about it.

I will just download it and try it, I thought (forgetting I have a completely addictive personality that always craves the next stupid thing to be addicted to) and then I can just delete it if I don’t like it and/or to prove I am not going to get addicted to it. I also downloaded it at the same time as my kids, reasoning that it would be a fun thing we could do together (that was a good one).

It took exactly two rounds of the game before my life as I knew it ended. There is a reason nearly 50 million people have downloaded this game. I’ve played it until two a.m. I’ve played it in a parking lot before leaving somewhere. I’ve played it in a restaurant bathroom. I played one quick round between innings while scorekeeping at my son’s baseball game. It’s ridiculous. I’ve been stuck on level 29 for four days and I’m completely losing my mind. And there are 365 levels. One for every day of the entire year of your pathetic life potentially wasted playing this game. You know, the life you don’t have anymore because you’re spending so much time matching colored candies in rows for some Galaga-forsaken reason.

Someone on Instagram gave me a link to a BuzzFeed article called “How to Cheat Your Way to Unlimited Lives On Candy Crush”, and that’s where it all went to hell. It’s basically a way to manipulate the time/date feature in your iPhone so that it thinks it’s tomorrow and so you get all your five lives back. If you’re stuck on a level, this just means you can play until your hands are numb, you don’t know when the last time your children ate a hot meal was, or you run out of gas because you’re hiding in the car from your kids blasting Air Supply and playing the mindless yet somehow mind-controlling game in your driveway.

I’m convinced the Tetris-concept-meets-graphics-of-old-school-Candyland game is one of luck and not skill. I’d rather believe that I am unlucky than that I can’t learn.

Chances are, though? I should just start introducing myself with “My name is Mary and I am just another Candy Crush Saga addict.”

Anyone have a cheat for level 29?