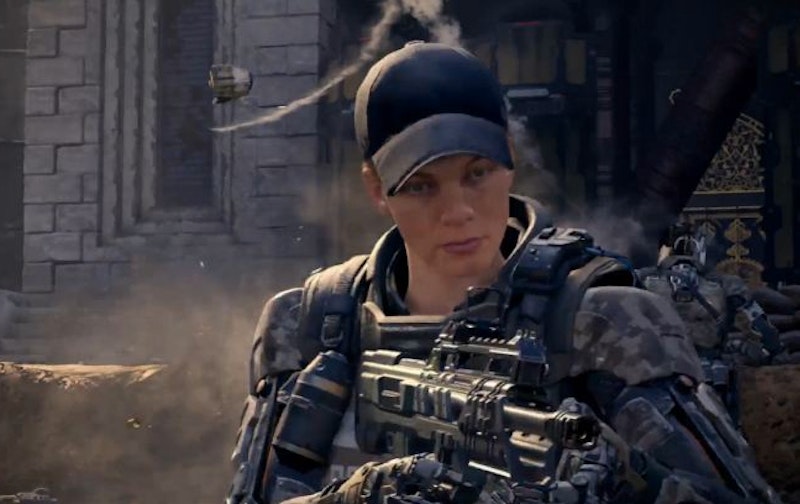 As I’ve mentioned before, the mainstream gaming industry has a severe lack of playable female characters. This is especially true in regards to the first person shooter/action-adventure genre. Call of Duty comes to mind when I think of traditional dude-bro shooters. Throughout the various installments of the Call of Duty franchise, the protagonist of the games has always been male. The narrative campaign (that many players of the game seem to ignore) has always featured a male solider. It can be argued that many gamers don’t play Call of Duty for the story, as it’s a multiplayer campaign and online play is what the franchise is known for. There’s some degree of customization available to players within online campaigns—the appearance of your banner and gun, and limited changes to your soldier. But there was no option to switch your soldier’s gender to female until Call of Duty: Ghosts was released in 2013. For a franchise that has been around since 2003, why did it take 10 years to place a female in the multiplayer/online campaign?

According to Call of Duty: Ghosts developer Mark Rubin, it was because “female characters require their own set of animations, and Ghosts' designers needed to account for the fact that female characters' smaller size might have made them seem harder to target…” This echoes what a lot of developers have said in the past: women are just too hard to put into games. During the summer of 2014, Ubisoft came under fire after releasing controversial statements explaining why there would be no women in their cooperative mode for Assassins Creed Unity. Creative director Alex Amancio defended the decision to have an all-male cast, saying, “the mode did not include the ability to play as a female avatar, due to the reality of production” and that adding women “doubles the animations… double the voices, all that stuff and double the visual assets… It was really a lot of extra production work.” It’s important to point out that Ubisoft’s previous Assassins Creed installment, Brotherhood, had playable female characters in their multiplayer campaign. Assassins Creed Liberation featured a female protagonist of color as well, so it was very likely that adding females was entirely possible.

After the controversy over Ubisoft’s statement that women were too hard to animate, there was discourse in the gaming community. Many other platforms expressed their opinions of Ubisoft, leading to a slew of jokes over Tumblr and Twitter. I was one of the women who expressed my anger. Amancio collectively slapped all female gamers in the face. I don’t think the AAA industry realizes how excited I get whenever a woman is introduced into the sea of all male protagonists. To be told that it’s “too hard” to animate a female model (after succeeding to do so before) is lazy sexism. But where Ubisoft has failed, Call of Duty is succeeding.

It was announced recently that Treyarch Studios would introduce the option to pick between a male or female protagonist for Call of Duty: Black Ops 3. That’s huge! Usually when there’s an option within a game to pick between male and female models, going for the latter means that you’re presented with a female body that runs the same as if they were male. No adjustments are made to make it look more natural. With Black Ops 3, studio head Mark Laima has announced that the female model won’t use a tweaked version of the male model. “We had a female rig and a whole animation set,” he said. The script for the game will apparently be gender-neutral as well. The game drops in November of this year.

I’m interested to see if Black Ops 3 lives up to my expectations. Although there’s a difference between what’s promised and what’s presented, I take comfort in the fact that at least it isn’t a game by Ubisoft.