Are We Smart Enough for Today's Sports Games?

They look better each year, but soon every player's going to need pro-level strategy knowledge. 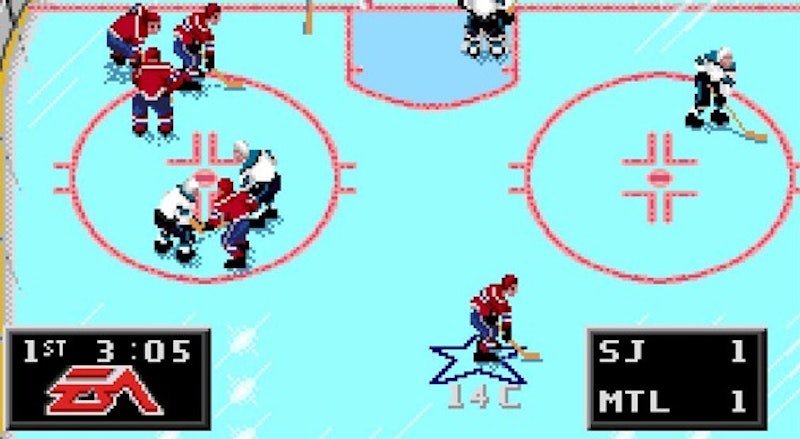 I like sports. I like analyzing them, although not necessarily with the in-depth, numerical intricacies of Baseball Prospectus or the metaphysical ramblings of the Free Darko troupe. I enjoy playing them: My brother, who offers the sparsest of compliments, recently reaffirmed that I’m “a really good amateur hockey player” to skeptical friends. And, regardless of which sport, I like prophesizing about them, to the extent that for over 18 months now, I’ve had a minor wager resting on the fate of the 2009 Michigan/Ohio State football game with my boss—what with my undying allegiance to my alma mater U of M and his… living in Ohio.

It only follows, then, that I enjoy the various sports video games more than a twentysomething professional likely should. I grew up on the likes of NHL 94, Bases Loaded, and NBA Jam, games that, at their core, are less about replicating the sport as they are about a pleasurable gaming experience. Slaying zombies in Castlevania: Simon’s Quest (What a terrible night for a curse!) versus actually slaying zombies; I assure, they’re quite different.

This lack of realism is largely due to the fact that the technology was not really up to snuff. It only makes sense that, as the systems became more powerful, the realism in the games followed a similar trajectory. Sure, in NHL 94, you could sweep across the top of the goal crease holding down the slap shot button and score almost every time, but the difference in strategy, graphics, and realism that the Sega Genesis offered over previous hockey iterations like Nintendo’s Ice Hockey were staggering. With the emergence of Next Gen systems, this line between realism and playability is increasingly blurred.

Let’s take other genres for perspective. Goldeneye was revolutionary not for its representation of realistic fighting as it was a joyous multiplayer experience. For as real as the game seemed at the time, how many times did you find yourself thinking: Even with body armor, does it really take that many shots to kill someone? A series like Halo can suspend those beliefs; you’re a spaceman and there are aliens and you can float through the sky and your guns are lasers and so on. By contrast, Gran Turismo is one of most realistic representations of racing and has subsequently trumped and divided the racing genre into a dichotomy: arcade racers and realistic racers, passing no judgment on either.

Sports video games have similarly been broken into such groups. Mario Tennis versus Top Spin. Tiger Woods versus Hot Shots Golf. NBA Street versus NBA Live/NBA 2K. But sports games differ from racing and first person shooters in the nature of what they’re representing. People don’t move like cars or bullets or shattering glass, especially when they’re making contact with one another.

I don’t know much about video game design, but I assume that programming a bullet going through a plate glass window and having it shatter over enemies is less difficult than designing what happens when two malleable objects (say, a linebacker and running back) collide in sometimes awkward and almost always unique ways. For as technically advanced as video games have become they are still inherently made up of pixels that are forced to interact with one another. This will not only limit the amount of animations capable in sports video games, but it will also limit your range of motion. For example, in NBA Live 09 there is an animation in the game (don’t kid yourself, these are all predetermined animations, programmed to make it look realistic) wherein a defender comes into the body of the ball carrier and drives him to the sideline. Though a particularly realistic animation and one that was absent from previous games, it also presents a number of problems in more dynamic situations like driving to the basket, wherein the ball carrier essentially stops his drive and is ridden off; otherwise, it’s painfully unrealistic.

But technical issues such as this can be brushed off as minor glitches that will work themselves out as the technology becomes ever more powerful. However, with the astronomical increase in graphics capabilities, we’ve also seen the rise of something far more complex than left joystick, X button, and R triggers. Sports video games, like Gran Turismo and others before it, are no longer for the weak-hearted and uninitiated. Do you know what defensive set most effectively neutralizes the spread offense? How about the neutral zone trap and left wing lock? What do you do when a slashing shooting guard is painlessly getting into the lane? No doubt, some of you will know the answers to these questions, and some of you may even think them harmless decisions not worth a second thought. But do you think your 10-year-old cousin knows what defensive set to call facing a third and four, up by three points, in the fourth quarter of a football match?

My online ventures playing NCAA Football 10 reveal that most of the players of these games understand the constraints and physics of video games, more than they do the actual sport. Watching people exploit what are essentially glitches in the game (rolling a mobile quarterback deep out of the passing pocket and waiting for upwards of 15 seconds for the defense to commit one way or another) strips the sport and the game itself of any realism.

The Nintendo Wii has aimed to remedy this with Family Play modes on the various EA sports releases, but any gamer will likely admit that the games (regardless of graphics) sacrifice playability. Even Xbox 360’s NHL 09 has made concessions to counteract this realism and the difficulties it presents by allowing players to use the controls of NHL 94—largely thought of as the most enjoyable hockey game of all time.

But sports video games stand at an impasse without a clear answer: The technology doesn’t have the power to truly present the game in a realistic light, but when it eventually does (which will be soon), do gamers actually have the insight to play them? Maybe it just takes a marginally athletic sports nerd like myself to really play football video games.