We can’t all run full speed. 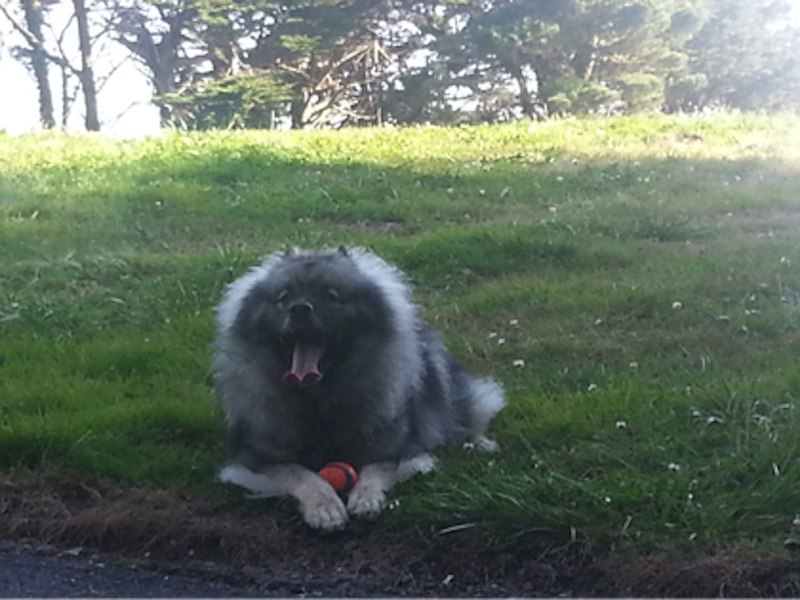 My Keeshond, my wife and I are all in our 30s. Keeshond is the name of a breed of dogs, affectionately called the “Smiling Dutchman.”

As you may know, dog years do not elapse like human years. Currently, dog-aging experts believe that a dog’s age is 21 after two human years of life, with four dog years added for each subsequent human year. This makes him 31. We named him Boumtje-Boumtje (boom-SHAY boom-SHAY) when we brought him home at nine weeks old, back in October, 2009. I first heard the name when a college basketball player from Cameroon, Ruben Boumtje-Boumtje was blocking shots all over the D.C. area for Georgetown’s basketball team.

These days, he is simply “Boumie” (BOOM-ee). My wife and I have been living together since 2004, but our lives have changed since Boumie entered them. A rough day becomes bearable when Boumie greets us at the door. A good day can turn sublime. Life is still bumpy and with the possibilities of home ownership, a second puppy, and the thought of a child on the horizon, uncertainty and anxiety are still very much alive in the recesses of my consciousness, but they are now on the periphery. Looking back on the last decade, it’s clear our life is neatly divided into pre-Boumie and with-Boumie.

Boumie is now entering middle age. At 35, he’s been through a lot. He was removed from his mom at a fragile age. Just when he was getting to know his pack, and establish his place in the six-puppy pecking order, his brothers and sisters started to disappear into the arms of strangers. He was the second-to-last remaining puppy in the pen when we took him to his new home. The first night in the new place was devastating to all three of us. We did the reading and the hardest thing was let him cry it out. It lasted two nights. Since then, he’s had no doubt that our place is really his place. We’ve named it Casa de Boumie in his honor. He reminds us why each time we pull up in the apartment’s garage, which leads directly to our front door. His deep bellow of a bark reminds us he’s none too pleased with our absence, yet delighted to find that we’ve returned.

My wife is 34. This month, I will turn 34, my Paul Pierce birthday. Ruben Boumtje-Boumtje, who does not know we exist, or that our beloved Keeshond is named after him, is 35. He has retired from playing professional basketball, after three years in the NBA and seven more in Germany, Ruben is now focused on the medical career he envisioned when leaving Cameroon for Georgetown.

Boumie’s age is on my mind because of the limp. He’s been walking gingerly, off and on, for the last two weeks or so.  The awkward gait makes me worried. It’s lasted too long. He’s clearly too young to need a cane. The limp is inconsistent. It comes and goes, but seems especially pronounced after his favorite and most strenuous time of the day.

We walk the six blocks up Clement St. to the edge of the golf course, where a trail runs parallel. I let him off the leash and he explores, noting the scents of all other species of creatures. We once found the remnants of a raccoon, likely a coyote casualty. We don’t see coyotes around here very often, but the golf course crew will mention them to the humans with dogs, probably to keep the dogs on-leash. The trail isn’t especially picturesque, with the maintenance/construction area down below the hill to the left. The trail is full of brush, sand, a few wildflowers, many tall trees, mostly Pine and Cypress, dropping their cones to the weedy surface below. The path meanders along the edge of the course. At the center of the course, there is a Museum, the Legion of Honor. It brings tourists and art lovers alike. We’ve seen thousands of people stopping to get a shot of the Golden Gate Bridge in the distance, on this route. This is not a country club setting.

Boumie wanders ahead of me, sniffing and stopping and then bolting ahead, bubbling with anticipation. By the time I get to our clearing in the fence, on the edge of the eighth hole, Boumie has bounced sheep-like, through the opening, and waits for me, tail wagging furiously. I make sure the tee and fairway are empty. I head out onto the grass, and we engage the euphoric mania of throw and retrieval. He goes out twice as fast as he comes in. After 10 minutes, he begins to do his “plop.” This is the time in between throws, when he’s resting, panting like a maniac. He realizes that if he brings the ball back, I’ll launch it right back out. When he starts to lose his breath, he retrieves the ball, takes a few steps back toward me, and then plops, huge pink tongue falling gracelessly out of his smiling mouth, taking in as much air as possible, with the tongue curling at the tip, to waft extra air in. His tongue really is a marvel, like his biological father’s.

On colder days in the late afternoon, his breath becomes cinematic smoke. After a double plop, I sometimes begin the rest of the walk, sometimes jog back down along the edge of the grass, keeping an eye out on the tee, in case golfers are present. Toward the end of the day, especially on Mondays and Fridays, there aren’t many on the course. It’s our time. Boumie dashes off in pursuit, his primal instincts engaged, the patter-patter of a miniature stampede. He is flying. I toss his poop bag in the red metal bin, filled with beer cans and golf ball packaging. When it’s his, it's poop. When it’s other dogs poop, it's shit.

This is the ritual. When he’s tired out, I do some of my own running, or some steep uphill walking, occasionally squatting. There’s a bench where I do some knee dips when I’m feeling active. Once in a while, the golf carts with the little white surrender flags zip toward us, and I put Boumie back on the leash. The guys working the course are generally nice about it. I feel a twinge of guilt, but then I consider the fact that I’m picking up trash and dog shit on the walk, and I keep an eye out so that I’m not in the way, and the guilt subsides. I nod and say, “No problem.”

The limp concerns us. We rub his front leg, up near the shoulder. It might a joint issue somewhere in there. He seems to appreciate the extra rubbing in that area. We don’t know for sure, but we think he may have tweaked it when he was trying to put on the brakes, going downhill.

Every few weeks, I’ll be sitting at a stoplight, and see an elderly person crossing Geary, the main street in our neighborhood, which gets a ton of traffic. Sometimes the octogenarian isn’t anywhere near the curb when the light changes. It makes me cringe. It makes me wonder where that person’s people are. The cane. The one step at a time. The beige sneakers. Old dogs with hip problems break my heart. Their eyes are usually heavy. They often seem to be asking aloud, “Is this really necessary?” as they drag their tired legs behind them. The bigger dogs, especially. They amble slowly. When you see elderly dogs that need to be picked up and placed into a truck or down onto the ground, you notice. We can’t all run full speed. We can’t all move the way we used to. But Boumie and I are only in our mid-thirties. We’re not ready to give in to this limping stuff. If you give us a cane, we will gnaw it down to nothing.