A city neighborhood is restored to show suburban white people that the city is A-ok. 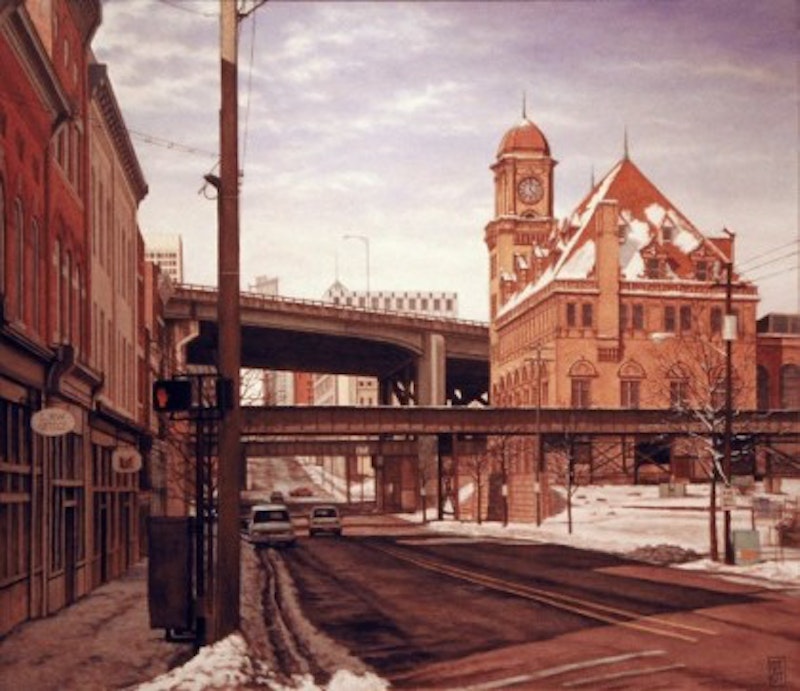 I recently moved to the Shockoe Bottom neighborhood of Richmond, VA, an urban wasteland that was once the center of commerce and big business there. I chose to live in the Bottom because I love city grit. Right outside my controlled-access doorway there are parking lots and old factories and warehouses that have been restored and converted into lofts to show suburban white people that the city is A-ok! For the past few years the Bottom has been climbing the ladder back to relevance. Now, in an effort to swiftly gentrify and redevelop the area as quickly as possible, there has been talk about building a new stadium in Shockoe Bottom right across the street from my building.

This would be a mistake of colossal proportions. First, why do architects and designers keep promoting the idea that throwing a stadium in the middle of the city will somehow create sprawling, heretofore unimagined economic growth and development? When has this idea ever worked? Second, it turns out that the very land where developers propose to build the stadium is the site where up until the Civil War hundreds of thousands black people were sold like chattel into slavery. Richmond’s Shockoe Bottom played a key role in the slave trade, and much of this history has only recently been unveiled.

Why put a stadium over that history?

In 1963 the old Pennsylvania Station in NYC was unfortunately torn down to pave the way for Madison Square Garden, which is not exactly the most desired residential real estate in Manhattan. Later this fall over in Brooklyn, the brand new Barclays Center will open, a gigantic arena that will only make the largely residential Atlantic Center corridor that much more annoying. In Chicago, Wrigley Field is stashed away in a neighborhood that I avoid like the plague. None of these are proof that arenas are engines of economic growth, so I’m not exactly sure why the suits in Richmond think that putting a stadium in the Bottom will somehow be different than stadiums of yesterday.

I don’t know anybody who is dying to live next door to a fucking stadium. They’re big, loud, and impersonal, and there’s a reason they’re almost always on the outskirts of cities, or at least not usually in deeply residential areas. Here’s another way to think about it: do you know a single person who lives right next door to a shopping mall? The answer is no because nobody lives right next door to a shopping mall. A mall, like a stadium, is kind of like nowhere. They’re not location specific and are virtually identical and interchangeable wherever they are.

The Bottom has clearly been cordoned off lately as the residential, entertainment district of Richmond. You can walk to work, to a coffee shop, or to restaurants. The priority should be on continuing to raise the profile of Shockoe Bottom as a live/work/play space, and you do that by building the portfolio of downtown apartments and heightening the level of amenities available to people who chose to live downtown. A stadium is not an amenity, and whoever thinks it is does not understand how cities work. Museums, art galleries, retail—these are amenities.

Building a stadium in Shockoe Bottom would not only display a misunderstanding of the purpose of cities, but it would also further erase the history of Richmond’s role in the slave trade, a city that from what I understand is simultaneously proud and ashamed of its confederate history. A drive down Monument Ave. takes you past all the greatest hits of the Civil War, and yet we’re talking about building a stadium over an important piece of African-American history?

Here’s an idea: let’s tear down that enormous monument of Robert E. Lee and build the new stadium in his place.