Trampolines Give Stupid Parents License to be Reckless

More bounce to the ounce. 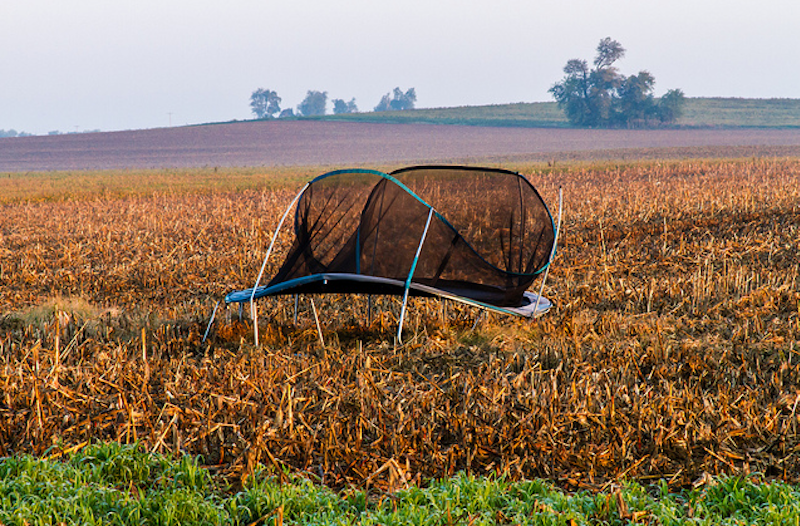 Do not let HGTV fool you: not all Southern United States backyards are created equal. They are not uniformly outsized or humongous. You and everybody on your block could not viably raise alpaca herds, at least not in central Texas. Here, new home construction mostly means that you can touch your neighbor's house with a broom while leaning out of your window, that your backyard is roughly the size of the average Maryland suburban backyard, and that a high fence of wood or wall of stone usually surrounds these backyards.

Sometimes you'll be driving through a subdivision at mid-day on a weekend and see kids perched on these walls or fences, or clambering up, balancing themselves precariously. This can be unnerving, because the kids are a couple years away from the tween/teen era, and the drop-offs on the far side are eight or 10 feet, which should be scary unless there's the chance of tumbling into a quarry or swimming pool. But anyway, the kids tumble back into their own yards, and then they're up! And then they vanish. And then they're up! And then they vanish again.

Trampolines, yes. Trampolines, which caused 98,000 injuries in children in 2009. Enjoyed by several children simultaneously, without nets and probably without adult supervision. (Blame Tigger; I do, at least in part. All that fucking bounding and bouncing and tackling and tumbling about, in post-Technicolor, guffawing like somebody's perpetually congested great uncle.)

Often I've struggled to think through the thought-process at the end of which the decision to give in and purchase one of these playthings of doom emerged, and was weighed once or twice, and determined to be a good, sensible idea. There may be some societal fear logic at work here—the same apprehension by which modern parents are less willing to allow kids to ride their bikes around the neighborhood than their own parents might have been. The thinking: if Timmy and Olivia are playing here, they are therefore less likely to skin a knee or run afoul of bullies or be kidnapped/sold into the underground slavery trade that makes this country great.

There are a lot of problems with this thought process. For one thing, parents who follow it are effectively letting themselves off the hook: if you're helicopter parenting this hard, you're less likely to really talk to your children about the dangers that lurk out in the world. For another, if you lull yourself into a sense of over-complacency because the kids are playing in the backyard and you're in the kitchen, you're more likely to tune out the sounds of their playing; this is especially dangerous if, say, you only have one kid.

So if your kid is doing triple bounce flips on the trampoline and either gets caught in the springs ringing the trampoline or bounces off and breaks his neck and dies, or breaks an arm and gets knocked out with a brain hemorrhage, it's entirely possible—probable, even—that you won't realize what's gone down until it's too late. Which sucks, especially given that there are dozens, even hundreds, of other fun things kids can do safely by themselves or with friends in a small-ish backyard, things that are cheaper. Things that are sports-related, or imaginative, or involve sprinklers that can be had for $5 at Wal-Mart, or patio chalk, or mini jungle gyms. Parents forget, I think, that it's okay to play devil's advocate and let their kids fume after an argument about a particular want. You've got to know when to pick your battles, and a lot of parents don't pick battles over trampolines. Heaven help them.