Toward a Bland, Functional Conservatism

When online clothing “fora” stop being nice and start getting real. 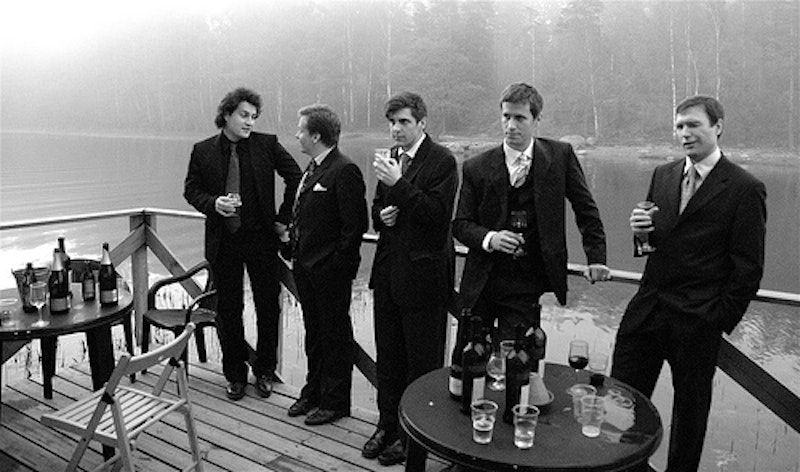 A while ago I wrote an article on Ask Andy About Clothes, a stuffy, sleepy Web forum devoted to the arcana of men’s style. Ask Andy members hold forth on suit quality, subtle gradations of formality (down to specific kinds of wool, and the minutiae of shoe shape), and where to get the best prices on luxury clothing. They also heap abuse on “fashion,” which they view as an impermanent, commercial wind that does not so much as ruffle the hair of a “true gentleman.” Reading the discussions I noticed that the general tone was polite and conservative, that their ideal look tended towards a certain overdone fussiness, and that in some cases the promotion of quality clothing verged into classist sneering at the plebeians with their white sneakers and cheap blue jeans.

Ask Andy, despite its occasional forays into foppish excess, tends toward a bland, functional conservatism, both in dress and in politics. Forum members associate the clothing of a supposedly saner and more stable bygone era with an equally faded masculine ideal. Suits and fine dress shoes, in the symbolic order of Andyland, are for gentlemen; to be a gentleman is to be poised, sophisticated, punctilious, and dashing while the rest of humanity slouches deeper into apathy and filth.

Unfortunately for the Andylanders this “gentleman” ideal is not something that you can achieve by ordering custom vests over the Internet. Whatever your definition of gentleman might be it’s unlikely to match the mannered, exaggerated obsession with clothing details found on this web forum. In fact, the more I followed the discussion the more I came to realize that relatively few of these people behaved like “gentlemen” and that many of them, despite their sincere enthusiasm and encyclopedic knowledge, didn’t even dress that well. Some Ask Andy members post pictures of their outfits, and many of them looked uncomfortable and sort of ridiculous. I began to wonder what I was seeing here—Ask Andy had developed a distinctive verbal and sartorial style that drew on ideas of “classic” and “gentlemanly” attire and behavior, but that was really something new and distinct to the Internet.

I learned more by perusing Styleforum, a site with no formal relation to Ask Andy, but with much of the same clientele. The atmosphere of Styleforum suffers from the acrid reek of Internet nastiness; swearing is permitted, as are unkind remarks and impenetrable in-jokes. Ask Andy, in comparison, has the hysterical decorousness of a formal afternoon tea. Styleforum makes less reference to the “gentleman” ideal, but it certainly has its own unique aesthetic and value system.

Both Ask Andy and Styleforum maintain long “What are you wearing today?” threads, discussions in which posters provide photographs of their daily outfits, often in considerable detail (an especially bizarre relative of this is the What are You Wearing Today blog of “Kitonbrioni”, a member of both Ask Andy and Styleforum, and a man with extremely expensive taste in, unfortunately, shapeless and ugly clothing). These "What Are You Wearing" threads provide a perfect place to see how the forum members think and what they value, and of course to get to know the stereotypical forum looks.

Styleforum at the moment seems to favor complicated double-breasted suits with peak lapels; Ask Andy is more of a mixed bag, though this winter there does seem to be a strong emphasis on lots of wool coats and sturdy, ugly shoes. As I looked through these threads I realized something: these people were, on the whole, no better dressed than the people I see every day on the streets of Iowa City. Certainly they were wearing more clothing, and much more expensive clothing, and many of them had very shiny shoes, but their outfits ranged mostly between various shades of buffoonish excess. With few exceptions their daily outfits looked like a costume—they expressed too many things too forcefully. The “forum looks” diverged increasingly from reality and were no longer necessarily about stylish dress. Instead they served the Internet forums’ particular likes and dislikes. Men were posting photographs of their outfits to please their friends and to show how closely they fit a synthetic ideal of the well-dressed “gentleman.”

Devotees of these clothing sites sometimes refer to themselves as “iGents.” They use the term unselfconsciously to mean, essentially, a gentleman who follows clothing websites, an adherent of the hazy “gentleman” ideal. Others use the term to mean the same thing, but unkindly. When they say iGent they mean precisely the kind of person who follows an Internet forum’s ideal of gentlemanly attire and conduct: a man who types in a affected “My good sir” manner, who buys his clothing to please his virtual friends, and who considers himself an arbiter of taste in the absence of any evidence of said taste. Forum habitués who have fled Ask Andy or Styleforum for various reasons have begun congregating at the Film Noir Buff forums, nicknamed “Devil’s Island,” where they relentlessly mock the iGent affectation.

As I read the jibes and satire of Devil’s Island and thought things over it became clear that the adherents of the clothing forums (what Ask Andy preciously calls “fora,” an affectation that the Devil’s Islanders rigorously and sarcastically imitate) had created a process of involution, in which sartorial distinctions grew finer and finer until members became preoccupied with pointless subtlety and, in many cases, began inventing clothing problems where none really exist. This, perhaps more than the silly obsession with being a “gentleman,” defines the particular habits and values of these groups.

The signal example of the imaginary sartorial problem is shoe creases. Readers who own shoes will notice, should they examine them, that the shoes crease somewhere on the instep because they bend when you walk. Many iGents consider this an error, and therefore contrive complicated leather care regimens in order to keep their shoes looking as if they had never been worn. They present this obsession as if it were a natural and normal part of caring for expensive shoes (and many of these people own truly expensive shoes, at or over the $1000 mark). Conversely, some of the more extreme members embark on bizarre “antiquing” projects or use alcohol and dye to change the color of their shoes: for the iGent, buying a piece of clothing (suits as well as shoes) is the beginning of a process of perfection. You don’t just wear it, you adjust and alter it, maybe perpetually.

This technical silliness has little, if anything, to do with dressing well. What I took away from all this was that clothes, in a reversal of the cliché, do not make the man. The fussy WASPs and WASP-wannabees of Ask Andy, the dandified aesthetes of Styleforum, and the acid-tongued expatriates of Devil’s Island know a great deal about clothing. They’re a great resource if you have a specific question about clothing. They’re also an object lesson in how an interest can become a prop, and can embroil a person in a very weird virtual social life and, perhaps more alarmingly, can lead a person into adopting the opinions and values of a bunch of strangers for his own. New iGents come from somewhere, after all.