Either you were around for vanilla ice cream valhalla, or you're permanently shit out of luck, jack. 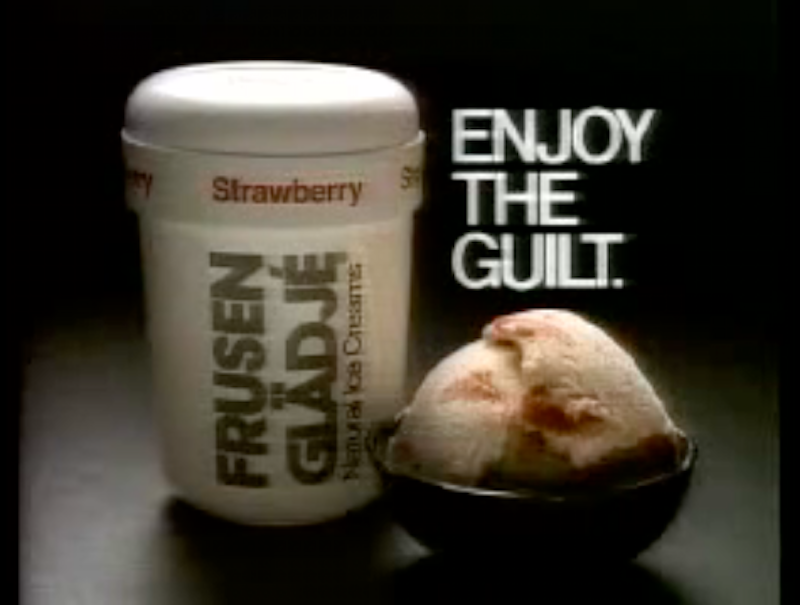 There'll never be another Woodstock, it's often said. There's inarguably some truth to that, but it's also one generation's way of telling future generations that life used to be better than it is now, that the old days aren't coming back, that kids today have it easy, and so on. Of course, footage from yesteryear implies that yesterday basically sucked; grainy archival film of freedom marches and sit-ins and music festivals mobbed by hippies looks like a pure vision of hell. In other words, there's no way to recapture how it felt to be alive back then, whenever then happens to be.

If you were not alive and reasonably sentient in 1987, watching this commercial for Frusen Glädjé will mean exactly zilch to you; it will register as a time capsule of dated fashion and pre-HD fizz-fuzz. If you were alive and reasonably sentient in 1987, you may or not have supped at the trough of divinity that was Frusen Glädjé; if you happened to do so—if fortune shone upon you at least once—you have likely not forgotten the sensation, or the magic, and you are not laughing at the commercial, because you did it too. You totally extracted the ovoid-like pint of Frusen Glädjé from the freezer with the intention of eating, like, a quarter of the thing, but returned from a fugue state to discover the carton empty and your wanton lust for the Platonic ideal of vanilla ice creams temporarily sated.

The problem with having been alive and reasonably sentient in 1987 but not a budding memoirist is that while I can state with resolute certainty that the after effects of vanilla Frusen Glädjé were ecstatic, and almost sexual, I am unable to do justice to its immediate taste and textures. So it almost becomes a confectionary dairy equivalent to what my recollections of To Love And Shave In L.A.'s Where A Horse Has Been Standing... album were before the band made it available to the masses for free: an ideal somewhere beyond the point of reproach, an unattainable peak. You had to be there.