The Truth About Amsterdam's Coffeeshop Culture

Because you can see museums and canals anywhere... 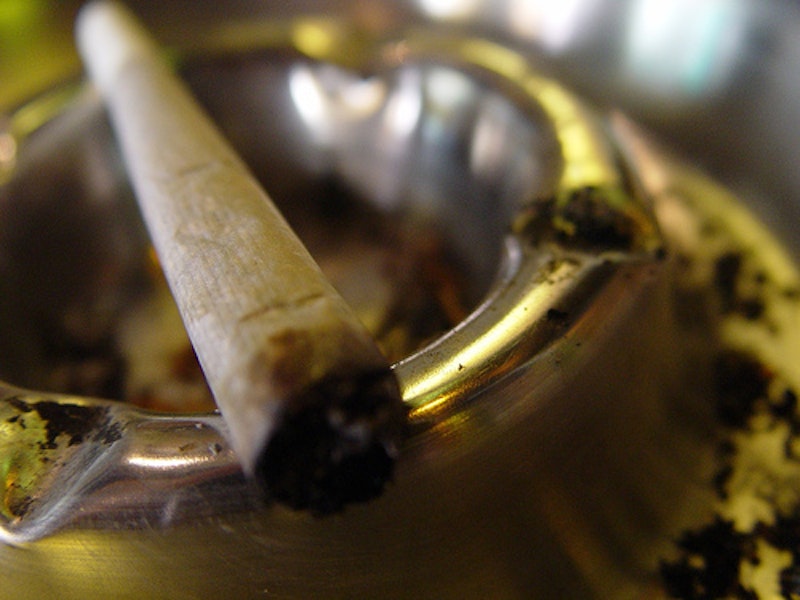 Particularly when you have only a short time to spend in a foreign country, you become conscious of the need to imbibe as deeply as possible of the essential alienness of the host culture. Amsterdam, I am reliably told, is famed for its vibrant culture, fine food, and engaging museums. But many other places, including some I've called home, have been renowned for similar virtues, and Amsterdam also has one asset which it shares with no other municipality throughout the world, and I decided it would be foolish to not indulge as richly as I was able in this unique aspect of the city's character.

Or at least this was the excuse I gave myself Thursday afternoon when I didn't quite manage to make it to see the Rijksmuseum. And Friday when I decided, all things considered, that the Amsterdam Museum of History couldn't be all that much more interesting than staring at my hands for two or three hours. I have a long standing interest in the history of the Netherlands, from the 80 Year War to the Dutch resistance movement in WWII, but I'll be damned to hell if I've had much opportunity to indulge it. When I got off the plane I picked up two free maps of Amsterdam, one marking all the cultural points of interest and one marking the coffee shops. I've gotten more use out of the former, but that's only because you'd need to be Helen Keller with a clothespin affixed to your nose to need help finding weed in this city.

Which is all just as well, because museums are not cheap. Nor is food, liquor, anything really; the long national decline of the dollar doesn't really hit home until you find yourself paying seven dollars on a street corner for a cheese sandwich. And given what you could be spending your money on, you become ultra-conscious of the euro spilling out of your pocket, miserly as scrooge, calculating the cost of all coin spent in terms of the marijuana you could buy with it. A canal boat ride is three joints, dinner at a pub more than four-and like I said, there are a lot of boat tours in the world, and dinner can be had pretty much anywhere. I've been skipping a lot of meals.

In Amsterdam coffeeshops sell weed and cafes sell liquor. I never did find out who where I could get a cup of coffee, but then I didn't end up looking all that hard (coffee is about 2/3 of a joint). The coffeshops are about what you would expect from a service catering to a clientele of international fratboys and granite-stoned hash tourists. Their decor tends to neon signs and tie-died pot leaves, and originality does not seem to be highly prized-during one of my many jaunts across the city I pass two seperate establishments claiming, as their title, ''Bob Marley's Coffeeshop.'' The staff at these places tend to be mercenary but friendly, dispensing a few hours of bliss without enuthusiasm or judgement. My fellow patrons aren't exactly the sort of people I would want performing open-heart surgery on a close family member, but then you can only look at a man so judgementally through a cloud of marijuana haze at 11:00 in the morning.

In theory grass is only legal when smoked on private property or in a coffeehouse, although as far as law goes this one barely rises to the level of polite fiction. Tourists smoke joints on the canals any time of the day, and Dutch Grandmothers wrinkle their noses and lead children quickly past. The occasional pair of policeman (or polities as it is rendered in Dutch, a rather adorable alteration, especially if read phonetically and late in the evening) that one sees crossing the canals in neatly pressed white shirts offer little more than a condescending head shake at the poor manners of their guests.

But then Dutch law enforcement officials, as a tribe, don't seem to be all that much about, well, enforcing the law. There aren't many of them, and they don't draw attention to themselves. The only time in five days I saw one engage in anything beyond giving directions to foreginers was late one evening when a car ran a red light in front of a cruiser. The cop stormed after him, honking his horn excitedly until his quarry pulled over, then he leaned his head out the window and subjected the unsafe driver to a stern tonguelashing lasting about a minute and a half. Afterwards they exchanged regards and continued on their way. I noted, with interest, that at no point did the officer driving the police car see fit to even flash his lights.

The whole city seems to run on a sort of genial anarchy, the uniform custom of the Netherlands sufficient to entice its inhabitants toward a commonality of behavior which fear of law could never induce. Well-muscled Dutchfolk fly by on bikes, weaving in and out of traffic, blond hair blowing in the breeze rather than stuffed under a helmet. They go about their business with a casual haste which could not provide starker contrast to the hordes of tourists surrounding them, unable to find the most major landmark and frequently blustering into the path of oncoming trams. What at first seems to be nothing more than abject chaos in fact reveals itself as a clockwork machine so perfect it runs effectively even with hordes of foreigners gumming up the works.

Traveling tends to reaffirm the extent to which culture is the father of law, rather then its agent. It is obvious to anyone spending even a brief period of time in Amsterdam that the small eden they have created is no more a product of its political or legal framework then a rose bush is the pot which keeps it rooted. Any attempt to reproduce what has been created in the eight united Dutch provinces would be utterly impossible. What thrives in the well-cultivated soil of Holland would metastasize and overrun the harsher and less temperate Americas, like the Kudzu has the south east. It is hard to imagine all 350 milllion American citizens behaving with the civility and friendliness required for a place as vaguely policed as Amsterdam to operate in the fashion it does. Which is to say that, for all my libertarian leanings, I think it unlikely the city of Baltimore would be greatly improved by the addition of twenty-five or fifty coffeeshops, and all the surrounding chaos that implies.

As for Amsterdam's other famous vice I'm afraid I have no firsthand knowledge to share. Having spent time being chased by the shrill, desperate working women of Bangkok, the red light district here seemed almost quaint by comparison, and held little appeal for me even as an object of study. And besides, 20 minutes with a whore is like six or seven joints, and as I said, I'm on a tight budget.