It's harder to get seated there than almost any other restaurant in America. 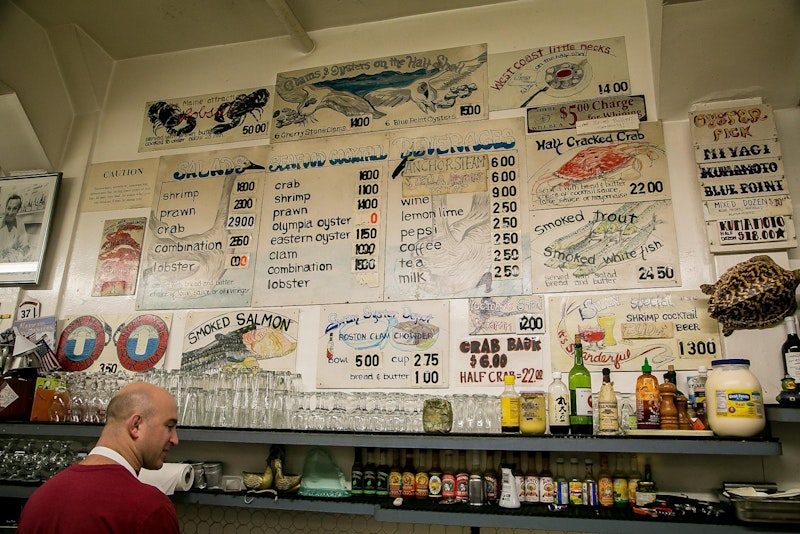 When this pandemic's over, the reheated, pre-packaged mall chains like Cheesecake Factory are going to dominate like never before, but I prefer legendary old restaurants. I like the feeling of connection with the past, and the atmosphere decades of success produces. There's a confidence and an ease that's comforting.

Of these classic restaurants, San Francisco's Swan Oyster Depot is the one I've visited most often. For a time, when I was living in Nob Hill, I could walk down to its location in the Polk Gulch neighborhood in 15 minutes, which I'd do on a regular basis. You'll get a good taste of that neighborhood vibe if you go to Swan Oyster Depot, because it's a tiny joint with just a marble counter seating about 18 people on wobbly stools, so you'll be standing outside in line on Polk St.'s gentle incline for at least 45 minutes because they don't accept reservations. I've seen people bring their own bottles of wine to drink while they wait. The line starts forming before the 10:30 a.m. opening time, and doesn't move fast once the place fills up. But nobody's going to rush you once you're seated, so they can bring in another customer. The food comes out fast too, because the people behind the counter know their stuff. Watch them as they shift around each other with ease in their cramped workspace behind the counter and you'll see a well-oiled machine.

Once inside, you'll notice the no-frills, cluttered decor (sports memorabilia, seafood posters, "no whining" signs, etc.), but you don't go there to be fancy—this is blue-collar hospitality at its finest. It's that and the fresh seafood that draws you there. That's why the late Anthony Bourdain visited the place every time he went to San Francisco to shoot one of his TV shows. He called the revered establishment “a touchstone” in his worldwide travels, and his “happy zone.” It's a time capsule—a comforting portal to the older, more democratic San Francisco that existed before the Silicon Valley invasion turned the town upside down with piles of cash.

The Sancimino brothers opened the restaurant in 1946, and it remains a family-owned business with different Sancimino brothers now behind the counter. Once you've eaten there a few times, they'll know your name. The menu's on the wall, much of it on handwritten signs. If you're an out-of-towner not all that familiar with seafood, talk to the person behind the counter. If, for example, you want to try oysters, tell him you're a rookie at this game and he'll shuck you some milder tasting ones. There's no condescension.

Essentially, Swan Oyster Depot is a fish market that allows a handful of customers to come in every day and dine at its raw bar (clam chowder and a whole cooked lobster are about the only dishes served hot) from 10:30 a.m. to 5:30 p.m. Only cash is accepted. During the holidays, the brothers close down the counter because they're so busy selling seafood in quantity.

If your first visit there is between around mid-November to May, the one specialty to try is the Dungeness crab. For a culinary walk on the wild side, try the "crab backs," which are crab innards swimming in a salty, buttery broth, served in the carapace of a crab; it's the pâté of the sea. Bourdain described the dish as “unicorn juice” and “the brains, the fat, the magic.” Dip sourdough bread into the custard-like concoction, accompanied by an Anchor Steam draft beer, brewed just a mile or so away.

This place isn't for everyone. You either get Swan Oyster Depot or you don't. One customer reviewing the place on the TripAdvisor.com website wrote that it was a crowded "dump" with uncomfortable stools and a crummy bathroom. He heard people order items that weren't on the menu, and groused about being treated like "three-day-old fish" because he was a first-timer and didn't have access to the "secret menu." Off-menu items and modifications emerge organically, leading to that "secret menu," which is one of the perks of being a regular customer, not a tool of exclusion.

The gem at Swan Oyster Depot is "Sicilian sashimi"—thinly sliced raw salmon, tuna and scallops drizzled with olive oil and topped with sea salt, freshly cracked black pepper, shallots, and capers. Squeeze some lemon on the fish and you’ll see why it's one of San Francisco's iconic dishes. Ask for a “dozen eggs”—an off-menu plate of raw scallops served with ponzu and Sriracha sauces. Get the uni, served over cracked ice in their spikey, spherical shells, a selection of oysters, and a platter of perfectly smoked salmon, trout, and whitefish.

If you go to Swan Oyster Depot at the right time, you can get their special hangover cure. On Saturday morning only, they serve their version of "hair of the dog," the "Red Eye"—a mix of Bud Light with cocktail sauce, lemon juice, Tabasco, Worcestershire, pepper and oyster juice.