The Pig Flu That Cried Wolf

Swine flu is still around? And it’s mutating? We advocate mild panic. 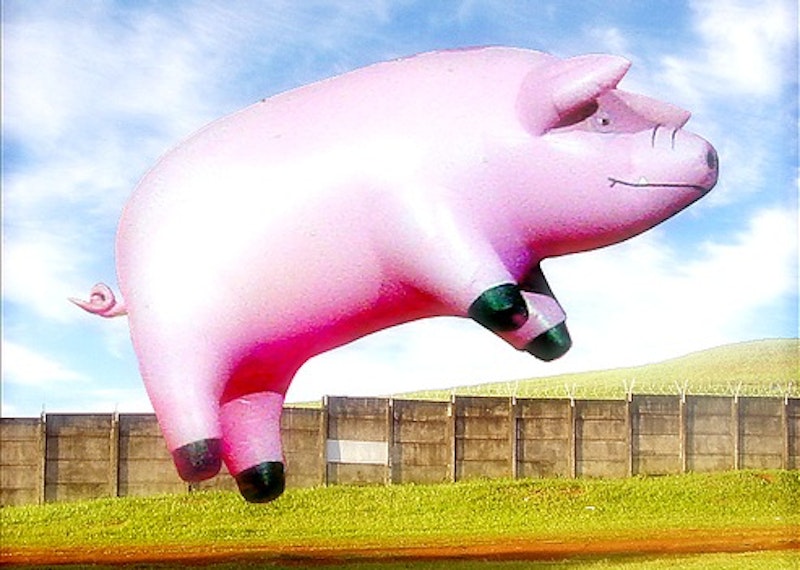 “Summer is not supposed to be the flu season in Michigan.” So begins a late June press release from the University of Michigan about the continuing fresh cases of swine flu among the local populations. The language is muted, bordering on cutesy. It descends into a list of helpful hints, not unlike the summer safety fliers my elementary school would send home at the end of each school year—right down to the Boy Scouts-ish “Be Prepared” as a final step.

This is a far cry from the Twelve Monkeys-connoting headlines that were filling up the news when the flu broke out earlier this year and was later declared a pandemic by the World Health Organization. The world held its breath in the face of trumped-up terror and worrying comparisons to the great influenza outbreak of 1918. And then the world let out a giggle. And then the world let out an exasperated sigh.

Almost before news of the pandemic started to spread, debunking of the pandemic had taken over the spotlight. The late night talk show hosts cracked jokes, countries began acting irrationally and arguing over semantics, while the experts and the media began devoting its time to assuring us of our safety and criticizing the hysteria.

An unfortunate side effect of the “hysteria” surrounding swine flue—scare quotes because I’d like to see some rioting in the streets and prolonged fear and unrest before we toss out words like that—is the complacency that seems to be creeping in to the discourse. Swine flu, unlike, say, Ebola, won’t make you bleed out of any orifices, thank goodness, and often shows up with only mild symptoms in many people. It is no more deadly than a standard flu, though it has proven markedly persistent and continues to spread, and has also shown recently that it can mutate and become treatment-resistant. Still, you could have swine flu right now without realizing it.

It isn’t as if the media has totally fallen off the story. If you poke around the right places, you might find a great article like this one advocating more aggressive use by the Centers for Disease Control of Tamiflu, a flu-fighting drug, in small outbreak situations. But the reality is, swine flu isn’t front-page news anymore. The story above about mutating swine flu was buried on page eight. Although the word is often bandied about meaninglessly, “awareness” actually means something to this situation.

While seemingly mundane, taking time off work or school and heading to the doctor’s office with the onset of any, even mild, flu-like symptoms is one of the ways to nip the pandemic in the bud. At the beginning of the press cycle, everyone I knew was especially aware of the sickness around them. Public coughing garnered worried stares from strangers. My co-workers seemed pretty willing to call in sick if they started to feel a bit flu-ish. As the cases keep piling up, though, we seem to have forgotten this caution. Just because swine flu didn’t decimate our population doesn’t mean we should just brush it off. What produces mild symptoms for some can be deadly for others. The possibilities of a nasty, quick-spreading mutation are something to ponder if you need something existential to worry about. That type of watchful paranoia is something I don’t mind seeing in my officials, but it shouldn’t be our only discussion of the sickness.

The “mild” current state is something we should work together to keep from preying on the weak, the young, or the old. It won’t completely eradicate the virus, but following those instructions at the bottom of that press release; elementary school formatting or not, being prepared is an easy way to do your part in reining in the spread of the virus. We need a little awareness, and we need to take it seriously. I just hope the hysterical TV media didn’t cry pandemic too loudly too soon, making it more of a self-fulfilling prophecy than true natural menace.