The Nine Laws of Carryout 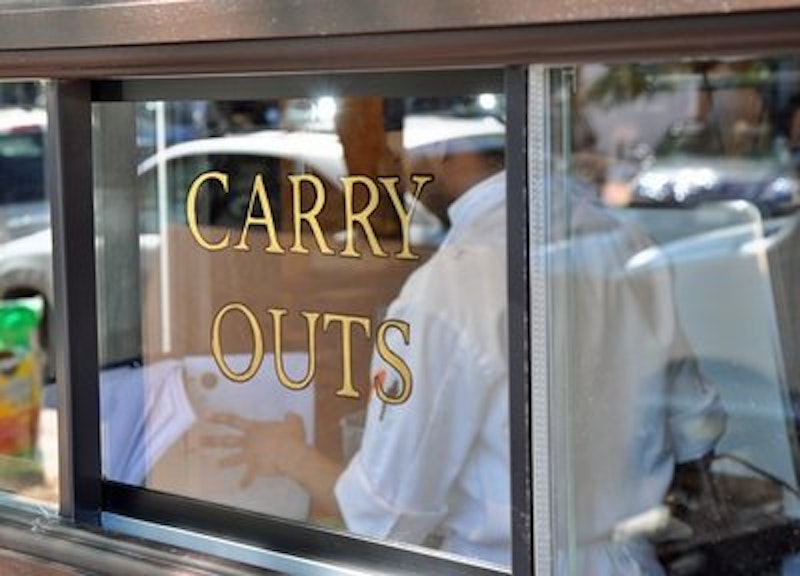 Life is full of trade-offs; the quality of one's restaurant experience is chief among them. What follows is designed to assist the reader in making dining decisions related to ordering carryout from chain and mom 'n 'pop eateries alike.

1. Check your order. I've put this one first because it's impossible to overemphasize how important it is, especially if you're the sort of person who needs to have the kitchen hold the onions or swap out whatever the regular side is, or if you don't want cheese on something, or extra salad dressing is a must. Thoroughness in ordering—dictating your order to the person on the other end of the line thrice—is a given, but never underestimate the ability of the order taker to make a mistake anyway, or for the order to be passed along to someone else who's in a hurry or unable to decipher the order taker's number, or for the ticket to be thrown at a nearsighted, underpaid cook. In other words, assume nothing. The policy at some places (Olive Garden, for example) is to do a walk through of the order, checking the contents against the receipt; you should demand this in every case, lest you bear the brunt of the blame upon arriving home with an incomplete or incorrect order. Others, waiting in line behind you, will fume impatiently, but if they've got any sense they'll follow your example. Let the customer beware.

2. Your food is going to be cold before you get home. Them's the breaks. Don't like it? Then next time, instead of going the carryout route, go somewhere and order and eat in a restaurant.

3. If the food is inedible, tough. See #2 above. Your options are two: drive back to the restaurant and demand a better meal, or send a letter or email to the restaurant explaining how the horrible meal ruined your life.

4. The over/under on curbside carryout service is roughly five minutes. If you're pulling up when you're supposed to and no-one's come out to talk to you within five minutes, go in there and see what's up.

5. When the order taker says, "It should be ready in 20 minutes," do not take him/her at his/her word. Be realistic; add in five-10 minutes. Then sort out how long it's going to take you to get there and leave at a sensible point. The order taker shouldn't have to call you to find out where you are, unless you get t-boned en route.

6. If you're not paying with credit or debit, make sure you have enough cash to pay. It's just common courtesy, really. Because after all, you've taken some time to come to a decision as to what you wanted to eat, then you communicated it to the order taker, and the order taker told the chef, and the chef made the meal, and you drove out to pick it up. So if you arrive at the spot with just a fiver and the cost of dinner is 10 bucks and there's no way you can put your hands on another fiver, you've wasted everyone's time, including your own, and since five bucks is a lot of money in this economy, it's not like the cashier is going to give you a pass or an IOU, and you don't deserve one anyway.

7. Keep the plastic ware, even if you have your own eating utensils at home. You just never know.

8. Tipping is not compulsory. I mean, did a delivery person get into a car with a garish corporate logo affixed, and run red lights to bring you food that's barely warm? No. You drove from the comfort of your home to wherever the food was, and you walked into the eatery and picked it up from someone after waiting in line, or maybe someone walked it out to the curb to you. Is it your fault that the restaurant employees aren't waiting tables or making food deliveries or shining shoes? Nope, so don't pity them much.

9. Come as you are. Look, you aren't idling outside of Arby's or Red Robin because you're en route to a catwalk in Milan; you're there because you're hungry and you didn't want to throw on a bra or actual pants, or comb your hair, or wipe the sex off of your face. If anyone has an issue with you queuing for carryout in schlub drag, take the opportunity to point out the inappropriateness of dining at IHOP or Jack In The Box in pajamas or sweats, or without footwear, which other people do all the time, even though you don't.