The Female Journalists Who Weigh Down Political Discussion 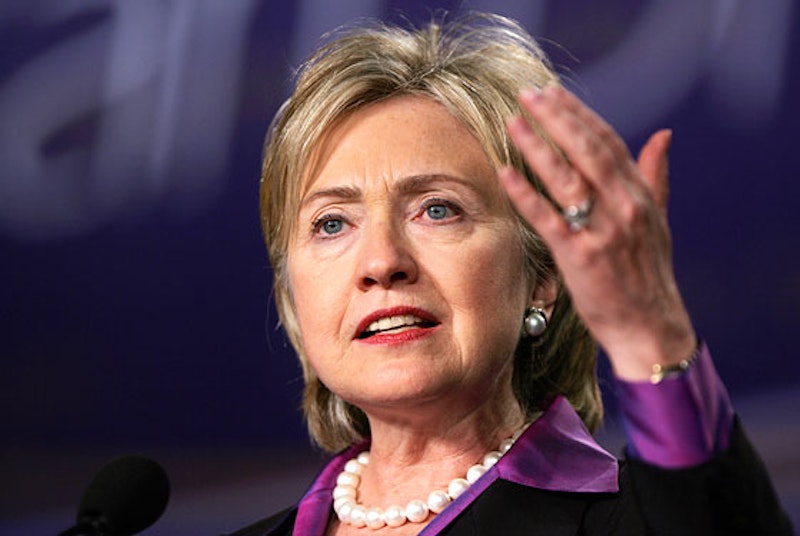 Hillary "needs to get back in the gym," said Tina Brown on MSNBC's Morning Joe recently. Secretary of State Clinton, as I believe she prefers to be called, was in Africa talking about the President's views on economic policy and food security. Sure, it wasn't quite clear which President's views, a mix-up that complicated the moment somewhat. But one thing that was certainly not up for discussion was how many hours a day Secretary Clinton spends on the treadmill.

It wasn't up for discussion because it wasn't relevant; in discussions of international policy, the Secretary of State's weight rarely is. Unless, of course, the Secretary is a woman. When the Secretary of State is a woman, a woman who came closer than any other woman has to becoming President of the United States, it's apparently considered more productive for public debate to focus on her appearance, instead of on her ability to negotiate. What's coming out of her mouth is takes a back seat to the shade of lipstick she's wearing on that mouth.

And if the woman in question happens, most egregiously of all, to insist on being taken seriously as America's top diplomat, rather than simply as her husband's wife, there's one very easy way to take her down a few notches. Tell her—or in this case, tell the morning audience of the MSNBC—that she looks fat.

There's nothing new about Brown's attempt to silence Clinton by attacking her appearance. In March of this year, when Meghan McCain criticized the GOP's failure to reach out to young voters, she was swiftly and sophomorically attacked by conservative radio host Laura Ingraham. Ingraham likened McCain to a failed plus-size model, suggesting that McCain was too inexperienced, but above all, too fat, to be taken seriously as a GOP thought leader.

In both of these cases, the people doing the silencing were women. And if their technique seems vaguely familiar, if you feel like you've heard it all before, it's because you have: in middle school.

We learn early on that in order to deserve to be seen and heard in America, as Clinton and McCain are, you must be beautiful and slender. This rule does not apply to men, of course: no one's stopping Mike Huckabee, who's overweight, or Glenn Beck, who's no George Clooney, from being both seen and heard. For women, though, the message is clear: you have to be "beautiful" to be allowed to participate in American public debate.

Of course, being slender doesn't improve or diminish one's diplomatic abilities, nor does it affect one's ability to take the pulse of America's conservative base. The real offense committed by Clinton and by McCain is that they dared to have opinions, and they dared to have power. As a culture, we are enormously uncomfortable with women in positions of power, be they Secretaries of State, pundits, or simply women who earn more than their husbands do. And in our discomfort, our kneejerk response is to attack that which is supposedly most sacred to every woman: her appearance.

Just last week, as the Obama family vacationed on Martha's Vineyard, The Huffington Post asked its readers to vote on the apparently crucial question of the First Lady's "right to bare legs," referring to Michelle Obama's summer shorts. This left me scratching my head, wondering which Constitutional Amendment would grant Mrs. Obama such a right, but also wondering, given that the First Lady is neither a model nor a beauty queen, how her choice of pants could possibly be relevant, or important enough to warrant a public debate. But the discussion, of course, wasn't about the shorts. It was about whether or not Michelle Obama was slim enough to wear them. The woman is a Princeton graduate and the First Lady of the United States, and all we can talk about is the beauty—or lack thereof—of her assorted body parts.

The irony of all this, of course, is that there seems to be a tipping-point: a woman can also be too beautiful to be taken seriously. One of Ingraham's criticisms of McCain, in fact, was that the young Republican was only receiving press attention because she was "kind of cute." The myth that women can be either smart or beautiful, but never both, and our assumption that beautiful women are therefore stupid, puts women in an impossible double-bind.

Brown's comments about Clinton, and Ingraham's comments about McCain, had little to do with the appearance of the women in question. Instead, they were attempts to discredit Clinton and McCain by reminding the audience that these women were "unattractive," and that "unattractive" don't deserve to be listened to.

It's notable that in both of these cases, women were attacking their own. In an age where "bitchy" women make for big news and big box office, it would be easy to imagine that women are to blame for their own double-bind. But the truth is, America has a widespread cultural discomfort with women in positions of power. Sexist remarks about Clinton's appearance and demeanor, made by Chris Matthews and other pundits, were infuriatingly frequent during last year's primaries.

The time has come for America to decide: are we going to be a nation in which any person, regardless of their appearance, can contribute their valuable ideas to our public debate? Or are we going to continue to waste time, and women's talent, chatting about lipstick, hairstyles, shorts and pantsuits?