The Capital of Fashion Disasters

A weekend in D.C. sends Manhattanism through the roof. 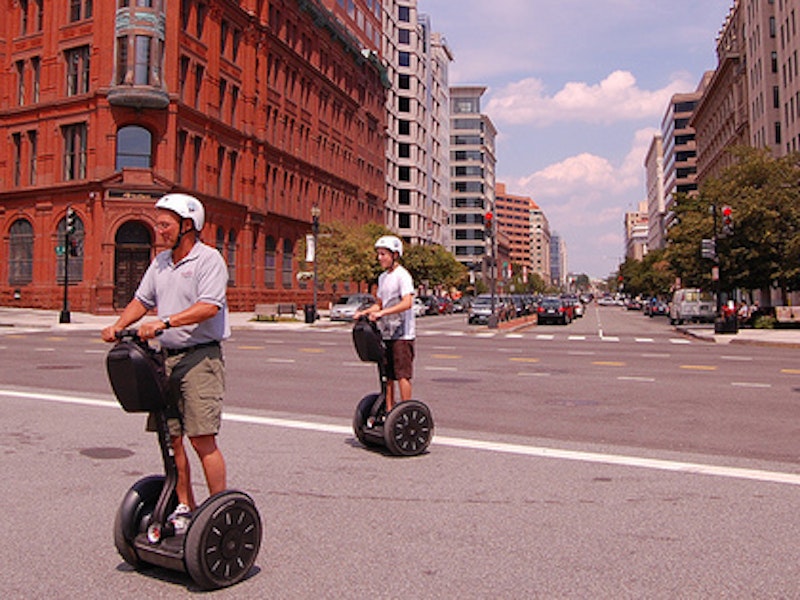 If you commit a fashion crime you will burn in Washington, D.C. where all the fashion convicts go to sizzle in oversized khakis, polo and un-ironic fanny packs.

I’m ordering French fries at a kiosk on the National Mall in Washington, D.C. The beautiful cashier is clearly very smitten by me, as if she wants my digits or something, but I don’t want to have to tell her I’m really just not that into poonaynay. She tells me my total, then goes: “Oh you’re not from around here. People don’t dress like that here. Where are you from?” For the record, I’m wearing skinny (what else?) dark purple pants, a white V-neck and these black sunglasses with a fluorescent yellow rim.

I’ve only been in D.C. for six hours now and five people have asked me where I’m from. I’m not exactly sure how they’re expecting me to respond. Maybe this?: “Hay, Girrrrrrrrrl! My name Chandelier and honey I’m from the land of Sashaying Bottoms!!!”

I didn’t like take offense or anything. I just think she was so excited to see somebody interesting that she almost passed out, and I don’t blame her.

After three days in the nation’s capital I can tell you that I saw a whopping three potentially interesting people. Three. My Cuban heels and I paraded through comatose neighborhoods such as Georgetown, Adams Morgan and U-Street, which are supposed to be the hippest of the hip. But actually? No. All the girls wore the same little black slutalicious dress matched with the appropriate Fuck Me Pumps, and all the guys wore the same size XXXXXXXL white button down with blue stripes, tucked out and worn to conceal their beer-belly and paired with size 48 jeans. The really sad thing to me was that the fashion was just as boring as the architecture. Aside from the calculated and pompous national monuments, there were practically no interesting buildings, no interesting people. Not even the gays were interesting.

SOMEBODY GET ME OUT OF HERE!

I’ve heard that D.C. sucks because it’s the capital of America the unfashionable. I’ve also heard it sucks because of the huge number of liars (lawyers), politicians and Bitch-terns. Everybody has to be boring because everybody works for a senator, or knows a senator or somebody high in politics, so it’s like they have to dress like they’re at work even when they’re out looking for a piece of ass. My friend once told me that he went out to a homosexualist bar and struck up a disastrous convo with this hot (but boring) guy. It went like this:

“What do you do?” the Washingtonian Gay asks.

Washingtonian gay: “Oh...” and then excused himself.

It’s almost like any creative activity at all is frowned upon in D.C. In New York, everybody is a writer/has a book deal/plays in a band/is an “artist.” In D.C., being creative seems a major cock block.

But you know, I didn’t always think D.C. was boring. My very first exposure to the triangle was something like 10 years ago. I was in high school and got this six-week orchestral residency fellowship with the National Symphony Orchestra. I still remember arriving and thinking that D.C. was the cat’s pajamas. Man, I thought, I was down the street from the White House, a few blocks from Georgetown, next door to this cool mall type place. When all the other geeks in my program were practicing, I was out being as fierce as possible. My most recent visit showed me, however, that there’s more to a hip city than a bustling club scene.

People too often think that what makes a city hip or cool is its nightlife. Do people go out? Where do they go out? I mean, yeah, nightlife is a small part of it. And there’s certainly a lot of nightlife in D.C. When I walked around the “hip” neighborhoods, there were tons and tons of people outside the bars and in the restaurants and a lot of activity on the street. But there was no zest. No pop. No UMPFH. There was, as my grandmomma would say, “No Lawry’s up in there.”

The thing that I believe tells you, “Alright, this place is DOPE” is how people express themselves through style. The ultimate proof that D.C. is boring is that there are two American Apparel stores. Hahaha!!! New York City has 21. If people feel comfortable enough to be kooky, i.e. shop at American Apparel, it tells you that there’s an edgy or underground culture. It means there’s an art scene, a music scene, really, any scene at all. D.C. seems to have no scene. Just family-oriented yet closeted gay Republican politicians who secretly pop their male interns.

I admit that I suffer from Manhattanism—the belief that Manhattan is the center of the civilized universe. And it is. That said, I’ve been lucky enough to live in or visit a lot of different places—L.A., London, Paris, Milan, Chicago, San Francisco, Zurich—and these places all share the idea of the street as a spectacle. The benefit of Manhattanism is that you begin to appreciate this culture of walking, the culture of the street, using the sidewalk as your runway, and you style yourself accordingly. That’s why there’s no Sartorialist in D.C. Ain’t nothing to Sartorialize!

When I climbed out of the train at Penn Station in New York, within seconds I saw this super fierce bitch in HUGE red-framed nerdy glasses, long, teased out “I-Just-Had-Sex” hair, a very short peach dress that looked kind of like a night gown, a shrunken blue blazer and pointy brown stiletto booties. She was a walking American Apparel ad. I wanted to have sex with her as my Welcome Back to New York treat.