The Burden of Ownership 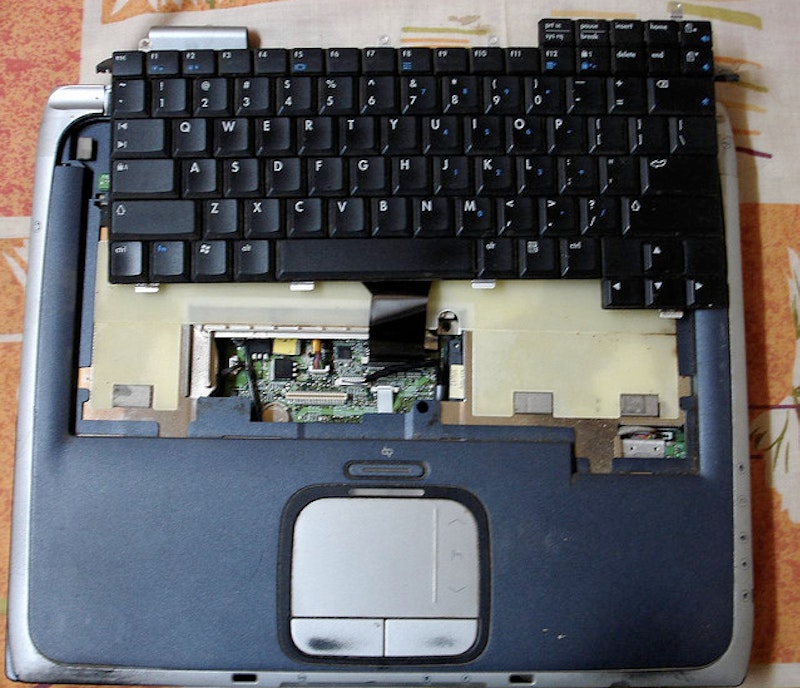 Last week, my niece dropped her new laptop. Her penchant for balancing it on her knees as she harassed other tweenieboppers with profanity-laced wall posts on Facebook finally gave way to gravity, and her laptop took the three-foot plunge onto the carpet, shattering the screen and rendering it unusable.

Repair costs hovered near the “completely fucking totaled” mark, so the option of getting a new laptop was quickly floated, rendering Laptop 1.0 a relic (and subsequently reinforcing the fact that her actions do not have consequences). Instead of leaving the poor husk of a computer to die a quiet death, or to endure a dignified resale on eBay, my niece decided to attempt to snap it in half. It wasn’t so much her signature Hulk-like rage as it was a vehement indifference to the value of things, which is a quality completely inherent to the nature of her questionable genetics. A dollar might as well be an elf’s saucy acorn cap or a mermaid eyelash or a fairy burp. Whichever half of the family these traits have slithered out from, it’s not my mine.

This same force of destruction has stomped her way through four Nintendo DS systems and three cell phones, among other expensive electronic items that should never find their way into the breakfast-sausage fingers of a 10-going-on-30 year old. Now, I fear for the life of the MacBook that her junior high plans on bestowing upon her later this week. We’re digging a very narrow, very deep grave. Just in case.

I don’t know how these things replace themselves. I’m just the uncle. You know, the one who stands at the back of the family function just sadly shaking his head and deciding when to quietly ninja myself out the door.
Yesterday, I woke up jabbed by ceramic figure that she’d broken and left on my bed, but at least I’d finally found the GI Joe shoe that she’d lost earlier that day. She’s the only human being whom I’ve ever witnessed destroy a stress ball, showering everything within a five-foot radius of her with a red, sticky mess.

Whatever motivation she has in leaving this path of destruction behind her is unfathomable to me. My own nature is dominated by a desire to repair anything that might not be functioning properly. I’ve bought old pinball machines to refurbish, de-soldered resistors off of old computer motherboards, and generally have a spare piece to rescue just about anything from the trash.
It’s not a revelation that we’re living in a highly disposable society. If something breaks, we tend to throw it away. Anyone who retains semi-functional or might-one-day-be-functional items in their possession is quickly classified as a “hoarder”—mostly because it’s a word that people see on TV and need something flashy to relate to and make themselves seem relevant. There’s excess, and then there’s an intelligent amount of preservation. When we throw around words associated with mental illness too carelessly, it only promotes a stigma against preserving things for any purpose.

My niece’s flippant, remorseless casting-off of things that she breaks is, in some ways, admirable in the most Zen sense. While she constantly lusts after possessions with a focus and fervor heretofore unseen, she recovers very quickly when her most prized items are destroyed, which is usually by her own negligent hand. Maybe it’s her general lifestyle of impermanence that leads to this attitude, but there’s a tremendous amount of disrespect related to the total lack of care and maintenance of what you do possess. The lines between material idolatry, material respect and material indifference shouldn’t be this hard to find, but the extremes seem more common than the median, and I’m terrified if this is a common sentiment among the 10-year-olds of the universe, and more so if is not something that can be matured and expelled through their tiny little brains.

In this particular case, it’s not an acceptance of impermanence, as noble as I might want it to be. It’s a case of “someone will get me a new one,” so the placid exterior of the Great Destructor isn’t so much peaceful as it is confidently avaricious. The sentiment, without the object-lust, remains admirable.

We can’t afford this kind of destructive detachment and entitlement, especially on a scale larger than one fifth grader. We can’t sit in the parking lot with our engines idling because we want to be air conditioned for the 20 minutes that our companion is shopping. We need to experience discomfort, and irreplaceable loss, and understand what it means to “go without,” and retrieve the definition of what’s genuinely important, but many of us are so unwilling to do so that we’re breeding it into our children. What does a “higher quality of life” actually mean if it’s completely synthesized and it’s not an actual reward for something? The balance of supply and demand couldn’t be more askew, and our perception of demand is worse.

By no means am I saying that we do not deserve what we’ve worked for. I’m a guy with an extensive Batman collection that doesn’t really contribute to the well being of Mother Earth, but witnessing this microcosm of indifference is a sobering experience. It’s such an alien approach to life that it calls my own values into question, and it’s an uncomfortable feeling.
I think I’m going to go recycle something.