The difficulties of getting healthy food onto the dinner table. 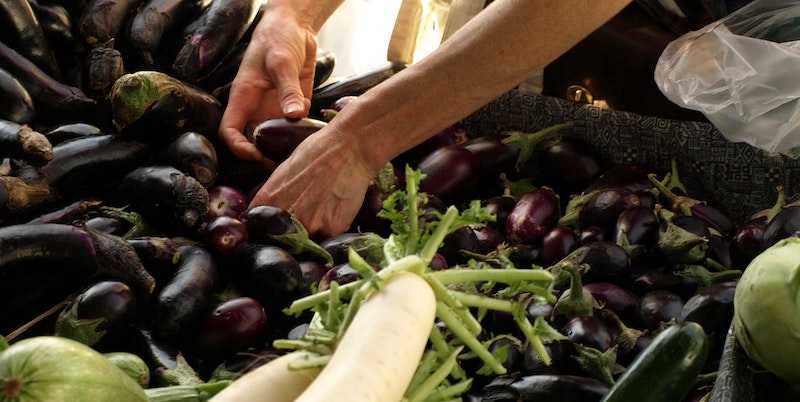 The press release issued by the Center for Disease Control reporting that Americans do not eat enough fruits and vegetables did not surprise to me. While I didn't spend thousands of dollars studying American eating habits, the results I obtained from my own little microcosm of the universe—my kitchen—coincided with theirs. Despite my best efforts as the family nutritionist, getting my husband, son and daughter to eat more fruits and vegetables has been a Herculean task.

I want my family to be healthy, so as chief cook, I try to incorporate the recommended amounts into our daily diet. I understand, as Dr. William H. Dietz, Director of the CDC Division of Nutrition, Physical Activity and Obesity stated, “A diet high in fruits and vegetables is important for optimal child growth, maintaining a healthy weight and prevention of chronic diseases such as diabetes, heart disease and some cancers …” But getting everyone to eat healthy is not easy, for a variety of reasons.

Partially, it concerns cost, convenience and produce shelf life. Living in the Philadelphia metropolitan area, I have access to a variety of fresh produce sellers, from independent greengrocers to chain supermarkets. Adding fresh produce, the healthiest alternative when compared to frozen or canned fruits and vegetables, to the family meal plan, however, can put a strain on the household budget. At its cheapest this past summer, for example, fresh corn sold at my favorite supermarket, Wegmans in Mt. Laurel, NJ, cost $1 for four ears. During the same time period, I was able to purchase Wegmans No Salt Added Canned Corn for only $.39. Corn was approximately 150 percent more expensive than the less healthy alternative of canned corn. During recent shopping trips, I’ve found that choosing fresh produce as opposed to canned or frozen adds somewhere between $20 to $30 to my biweekly food shopping bill.

Convenience is another factor when determining what to serve my family at mealtime. My family’s work schedules can vary drastically, making it difficult to plan meals that will meet with everyone’s time constraints. Often the easiest method of preparing food is the one to choose; pizza, take-out or prepared meals. Cleaning, paring, chopping and cooking fresh produce to make it edible can be time consuming and not something that easily fits into our busy lifestyle.

Keeping produce fresh is also major concern. Not all produce is created equal: different fruits and vegetables must be stored in different ways. Potatoes, for example, should not be refrigerated but kept in a dark cool place while tomatoes must be kept in a brown paper bag at room temperature. Not storing produce correctly will decrease its shelf life, yet doing so is not convenient in my kitchen where there is not a lot of available space.

While cost, convenience and shelf life are considerations when choosing whether or not to eat more fruits and vegetables, the biggest factor, in my opinion, is taste preference. Simply, people don’t want to eat what they don’t like. Former President George H. W. Bush, for example, caused a stir in 1990 when he said, “I do not like broccoli and haven’t liked it since I was a little kid and my mother made me eat it. And I am President of the United States and I am not going to eat any more broccoli.” Michele Obama said, “Neither the president or I have the beet gene,” when discussing her family’s eating habits.

Why individuals have an aversion to eating produce is not clear, but may be traced to both psychological and genetic factors. Many of us have had negative childhood experiences with food. Our parents forced us to remain at the dinner table until we were finished eating our entire meal, whether or not we liked it. Desserts were used as “rewards” we would receive only if we cleaned our plates. Forced to eat in this manner left many of us with an aversion toward certain types of foods.

A dislike of foods can also be the result of genetic factors. According to researchers, 25 percent of the population are “super tasters,” individuals with overly sensitive taste buds. Super tasters often have an aversion to bitter foods, such as broccoli, cauliflower, spinach, grapefruit juice and green tea.

While I have no reason to believe that anyone in my family is a super taster, we each have our preferences. My husband loathes mushrooms, and can’t abide eating any foods that are “too crunchy.” While my son John loves orange soda, he won’t eat oranges or drink orange juice, and dislikes spinach and asparagus. My daughter Caitlin doesn’t like cauliflower, grapefruits or raisins. As for me, the mere thought of lima beans makes me shudder.

Getting my family to eat more fruits and vegetables becomes something of a juggling act. Still, with just a little effort, the result, a healthy family, is worth it.