The Best (and Worst) Commercials of 2008

Nagging jingles, celebrity cameos, botched parodies... the year in advertising, in other words. 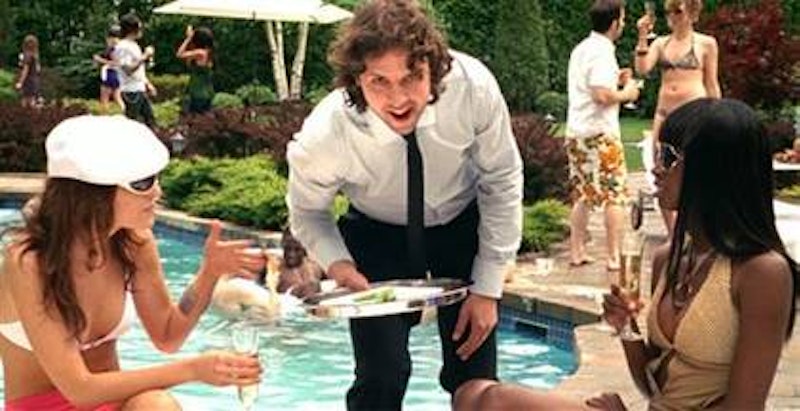 What’s not to like? $5 footlongs save cash, leave buyers with two healthy meals, and have an immensely catchy jingle. The most ingenious part of this campaign is that the developers sat down and thought something like, you know, we’ve got a lot of numerical and corporal dimensions to this idea. First, people have five fingers, so we should use that. Second, 12 inches is a foot, so there’s another limb connection. The result was the iconic movement that began with the display of five fingers and ended with two hands estimating the length of a foot. It was an oddly elegant gesture, like a tai chi move or something, the perfect kinetic compliment for the jingle. Then someone threw Godzilla and meteorologists into the mix, and it was poetry.

“You know what your problem is. You want everything. You want a husband, you want unlimited text, unlimited data, and unlimited calls,” a curly-haired girl explains to her friend at an outdoor lunch. Cue the cheesy Michelle Branch-ish song, the emotional low-register voice-over, and Sprint made one of the cleverest ads of the year. Sprint is probably just as guilty of sticking phones in a celluloid hero’s hands as anyone else, but in these ads the product placement is inverted. The writing is clever, the editing is faultless, and best of all, the ad parodies the fussy and greedy way that women are portrayed in films (see Bride Wars). The phone’s not bad either.

A lot of people get annoyed at the shaggy-haired, stoner-ish twentysomething guy who sings, “Too bad I didn’t know my credit was whack/now I’m driving off the lot in a used sub-compact,” but no one could forget him. He looks sort of like Rob Thomas, but better, and his collection of stories that flow to the same tune are more interesting than a Matchbox 20 album anyway. But there’s also an element of (probably accidental) logistics that makes this ad campaign even more striking: a free credit website theoretically should not have enough money to afford such persistent advertising. Some crappy credit website isn’t Best Buy or Comcast or an airspace-dominating enterprise. That inexplicable element makes it seem like the ads are actually an autonomous venture fueled by the star himself, and that makes his regret about not knowing his credit seem even more sincere. But don’t be fooled, once the site gets your credit card number, it starts charging a monthly fee.

After years of being trumped by the red and yellow flag wielding, globalizing McDonald’s, Burger King is back. Shaking off the creepy plastic-king campaign, their new venture is into the geographic realms that McDonald’s has not yet conquered. In the ad, they set out to have an unbiased taste test by flying boxes of burger ingredients into remote test sites to see which enterprise makes the best burger for popping that Whopper-shaped cherry. Sending burger missionaries out into the world isn’t going to help anyone, but the ads (and the online documentary) do manage to capture an interesting space between the Western-acquainted parts of the world and the rest, and it’s clear that the exact line is getting foggier, one burger at a time. Many of the burger virgins didn’t even choose the Whopper, but at least this ad accomplished the goal of getting people talking.

This ad confused the hell out of everyone. Why is Brooke Shields making a pretend public service announcement about women being overeager to have babies in order to sell some kind of flashy caravan? But that confusion, like the Whopper Virgin campaign, got people talking. No one will ever know the exact goals of the ad, but here are a couple guesses:
1. Dissociate German car engineering with the Holocaust by associating it with an excess of fertility.
2. Mock public service announcements
3. Remind people of the incest scene in The Blue Lagoon.
Better than using cheesy psychedelic graphics to rope in nostalgic baby boomers.

AT&T’s latest ad campaign features users of non-AT&T services expressing their regret by visiting themselves at a former moment of phone-related crisis. A guy watches his chump self playing pool and laments how he is at that moment missing a call about concert tickets. Another man views himself getting arrested because he had missed a call about a security system. The problem with these ads is that they break one of the most elementary rules of propaganda: customers are to be flattered. These ads are targeting non-AT&T customers by insulting their intelligence for not already having AT&T. The regretful individuals even say “[he’s/she’s] an idiot and doesn’t have AT&T.” Ouch.

Or “Glahh-day” as the incompetent housewife of the Glade commercials likes to call it. In all the ads, she’s trying to impress her elite suburbanite buddies and failing. Her gingerbread cookies are old, and her candles are cheap ones that she probably got in the Windex isle of the grocery store. Maybe Glade is trying to create some form of identification between women sitting around watching TV all day and this dopey character by elaborating on moments where they feel unimpressive. But trying to promote a product by portraying its ability to act as a symbol of a person’s general underwhelming-ness is just stupid.  Plus, the whole neurotic housewife stereotype has long gone out of style.

Hom Furniture
Those who are fortunate enough not to live in the Midwest may not have been exposed to these ads, and because of that, they are even luckier. In the 2008 ads, it appears as if Hom has been studying the cinematic techniques of “food porn.” Unnatural camera angles, zooming in on parts of a whole and then zooming back out, most Food Network shows know how to make pesto in a food processor look pretty damn sexy. But that feeling just doesn't translate when Hom’s advertisers try to do it with couches. Most of the spots feature a piece of furniture sitting against a boring background, while a camera pokes toward it and back over and over. Watching this process feels uncomfortable, and it’s even worse due to the terrible jingle they settled on, which goes, “Gotta … get a …. mega-big deal!” There’s no douchier phrase than “mega-big,” and nothing less sexy than a plushy couch.

This campaign is despicable for two reasons:
1. It ruined a festive, jingly carnival song by the Ruby Suns.
2. It makes the test-subjects looks stupid. The creators traveled all over, making random people try the “new Windows Mojave” and then tell them what they liked about it. Being polite, most people came up with a feature or two. But the joke’s on them; turns out that it's the old Windows, it’s just so innovative in itself that it seems new—or so they claim. After being told they’d been duped, the test-subjects try their best not to look peeved.

Remember when everyone loved that “Arms of an Angel” song and whispered about how it was written about heroin? Well, a decade or so after everyone got tired of it, the tune and its singer are back, sans needle drugs and with lots of injured domesticated animals. Bizarre? That’s just the beginning. One dog stares at the camera with its sole remaining eye, the other one covered up with a piece of hair that has been combed in front of it. At the end, a decrepit cat sticks its paw out of its cage and raises it—seemingly in prayer—toward the heavens. Whoever made this ad was definitely on something.