Tales From the Fountain Pen Message Board

They are exactly as lame as you'd expect. 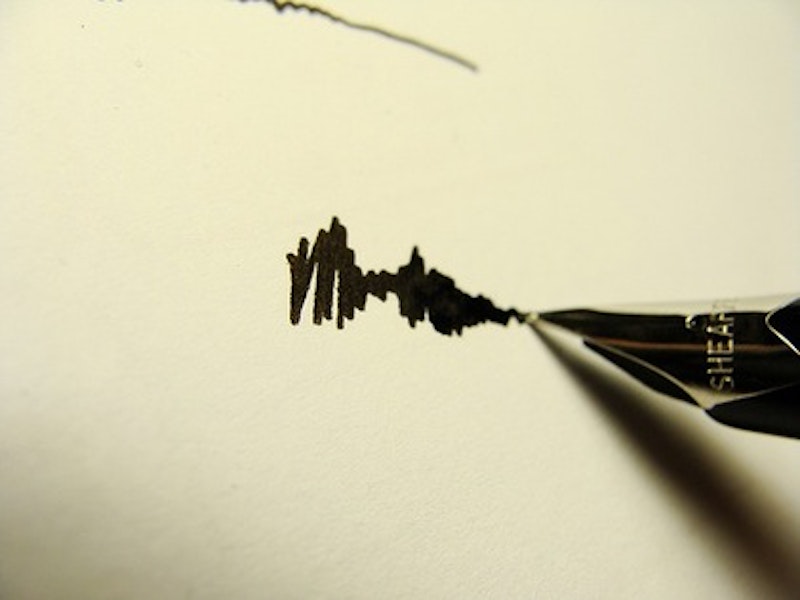 Yesterday I received Richard Binder’s “Nib Noise” newsletter, a monthly email that twinkles for me the way a bottle of schnapps does for an alcoholic. Fountain pen nerds regard Binder as the greatest living American pen restorer; he is a man who brings an engineer’s precision and an antiquarian’s expertise to fountain pen repair, and is capable of writing knowledgeably and at great lengths about ways to fabricate replacement transparent end caps for the Waterman Hundred Year pen in such a way that the restored item cannot be distinguished from an original should anyone, for god knows what reason, want to. Binder has a long waiting list for repairs but every month he offers a few dozen restored pens through his website, and his restored pens are generally classed as better than new.

I met Binder and his wife at a few pen shows and they were not notably pleasant, although they may have been confused by the fact that I was about 30 years younger than everyone else in the room. Pen groupies flocked around the Binders’ table; when you buy a new pen from Binder, as I did at the Philadelphia Pen Show in 2007, he smoothes the nib for you right at the table. He does this slowly and exactingly, which usually generates a long line. In Philadelphia I found myself at the head of the line and Binder held my pen (a Namiki-Pilot Vanishing Point in dove gray, a pen I subsequently sold to a cardiologist from Long Island) aloft, looking quizzically into the crowd for its owner. Binder wore on his head a magnifying armature, which even a non-nerd (of whom there were zero present) would have thought made him look like the Borg. So dense was the scrum of sweaty, pocket-protector wearing manhood between me and the smoothing table that I could not force myself through even though the man himself was waiting for me—and if you think fountain pen people are good at taking subtle cues about personal space you’re a fool. The pen was exquisitely smooth, though through no fault of Binder’s it was soulless and dull, something that I find true of all but the cheapest Japanese pens.

Binder’s table works well as a metaphor for the larger community of fountain pen enthusiasts, a group that I think of fondly and a little queasily. It was fun, but it was very bad for the soul. Most fountain pen camaraderie takes place on the Internet—in large cities there are pen clubs but I have no idea what exactly they do at their meetings. I learned a great deal about fountain pen enthusiasts on The Fountain Pen Network (FPN), an active message board for lovers of fine writing instruments.

FPN had members who had posted well over 10,000 messages, who appeared to be online almost 24 hours a day and who knew or seemed to know everything about fountain pens. It had moderators, the usual tin-pot dictators of Internet discourse, and on the fountain pen network they kept a very tight rein on discussion, ruthlessly purging posts that contained offensive material, even the mildest obscenities, or politically, religiously or sexually provocative comments.

One of the signal dramas of my time at FPN was a thread in which a fountain pen ingénue insulted Binder and his wife, and by extension the whole of fountain pendom. The FPN had placed Binder and his entire operation firmly in the category of demi-god, a man who could do no wrong in theory or in actual manipulation of fountain pens and their nibs. Everyone loved Binder; he was a great mind and leader for the fountain pen community, and the suggestion that he might be wrong about something, or rude, or a bad businessman, was ridiculous to everyone on FPN.

The community outdid itself in his defense when a typical Internet hard-ass came on the site asking about a good starter fountain pen. The hardass, who called himself Fastfed, announced that he was in some nebulous Internet way connected with the legal profession and that he wanted to buy himself and his staff some fine writing instruments to reward them for a lucrative but somehow vague contract that they had just won. Fastfed was a big deal, a businessman, someone who had no time to fuck around when it came to buying expensive pens for his lawyer or lawyer-esque employees, and he told the FPN in no uncertain terms that he wanted a speedy resolution to his problem. People recommended Binder; Fastfed called Binder in his New Hampshire lair and spoke to his wife, who coolly told him that she couldn’t read his mind and tell him the right pen and that he should look on their website.

Fastfed flipped out and insulted the Binders. FPN erupted with posters lining up to defend the Binders and tell Fastfed what a monster he was, and Richard Binder himself came on the Internet to tell Fastfed that he was much too important to put up with rude customers. Eventually Fastfed ended up buying a Pelikan M200 from isellpens.com (the cheapest possible source for pens on the internet) and various FPN members suggested grand master level maintenance techniques for getting the pen working as well as possible. I imagine that Fastfed is occupied to this day in his high-rise office feeding brass wire through his pen and massaging the nib against a steel plate wrapped in 1000 grit sandpaper, and if he comes out of this experience with something that still resembles a pen in any way I will be impressed.

I sparked a pretty contentious argument about how to remove foul odors from a Parker 51. A cardiologist and fellow Princeton man and I sparred about the practice of sniping on eBay. Sniping is using a software program to enter a low bid at the last possible minute on eBay—this tends to drive prices down because people don’t have a chance to compete. I felt that sniping was part of the “If I can do it, why shouldn’t I?” attitude of entitlement and self-centeredness that the Republicans had promulgated so successfully over the past eight years. The cardiologist felt that it was not violating the rules of eBay and was therefore fair game. I got into a major argument with a writer of feminist erotic science fiction over the Montegrappa “Cigar Pen,” a $700 pen designed to resemble a cigar or, in my opinion, a plastic turd. The writer felt the pen was elegant, I found it scatological, and in the most passive-aggressive and autistic way imaginable we insulted one another’s taste in a week-long debate over the best place to buy said monstrosity.

Over a year ago, after the affair of the cigar pen, I walked away from the forum and have not returned since. I felt like a sleeper awakened. In those latter days I had felt bound by bands of silver, chained to the opinions of a bunch of people who were dribbling Little Debbie cake crumbs into their keyboard as they typed a fiery thesis about the ethical problems inherent in using Noodlers or Private Reserve inks in a pen dating before 1961. It was liberating to realize that the elemental pleasures of talking to people and going out in the daylight would always trump the joy of telling some fountain pen virgin about the different fill systems of the Parker 51, but I would be lying if I were to tell you I never missed it.